August 13, 2020
(Happy National Left-Handers Day from the resident lefty owl! I've often dedicated this day to a blog about baseball lefties and baseball lefty topics. But every time I do, I get the feeling I bore all the righties who are used to everything going their way. So just a simple wish this time: Give a lefty a hug! Or a distant wave. Whatever . It's time for Cardboard Appreciation. This is the 295th in a series): 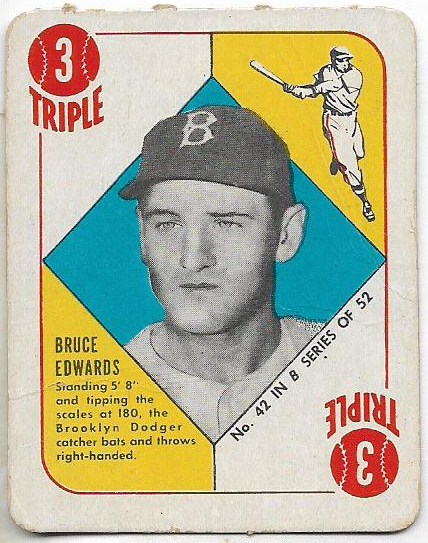 As I get closer to completing all the Dodgers team sets from the main issues of the 1960s, with only a few pricey or elusive left on the list, I'm thinking more and more about the 1950s and the Dodgers I need to round up there.

Unlike gathering Dodgers from sets from the 1970s forward -- even the '60s haven't been all that brutal -- the '50s are filled with known difficult acquisitions wearing Dodger blue. You know that high-number series in 1952 Topps where the cards are almost impossible to get? There 16 Dodgers in that series, more than any other team (the Giants have the second-most with 12. Meanwhile, the Tigers have two).

I can't even envision a world in which I get all of those cards. Jackie and Pee Wee and Campy? Yeah, no way.

There are several sets like that, particularly in the first half of the 1950s. The second half is somewhat easier. In fact, I have just about all of the Topps Dodgers from between 1956-59.

Here's where I veer away from my fellow collectors again: one of my favorite '50s Topps sets is the much-ignored and maligned 1951 Topps set.

This set is so ostracized that it isn't even consider the beginning of Topps' reign by many a collector. They point to the '52 set as if nothing was ever issued by Topps the previous year. "That was just a game card," is the general point of view among the sniffy sniffers.

Well, I like the '51 set. I always have. I don't know if I can put the reasons into words. It's probably because it's a tidy, little set, mini-sized, and the design is delightfully mid-20th century. I also like how there are "red backs" and "blue backs."

I was taught from an early age that the blue backs were more difficult to acquire than the red backs. I saw it in the first Beckett Price Guide ever issued in 1979. 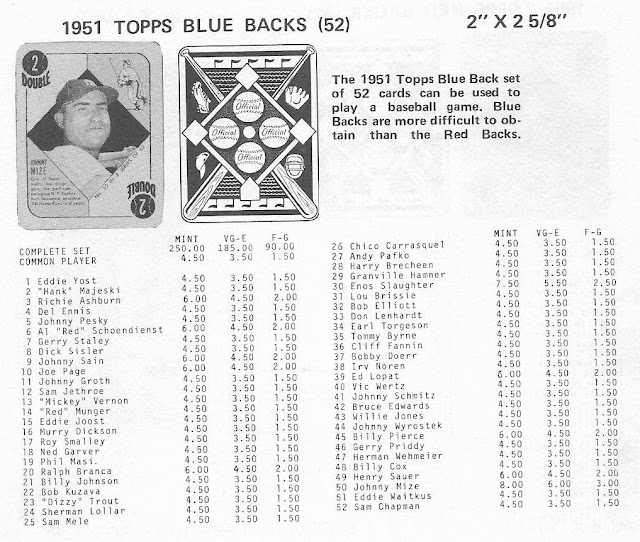 There's the page, some crazy prices, and that warning from 41 years ago: "Blue Backs are more difficult to obtain than the Red Backs, kid."

Accordingly, a complete Blue Backs set in 1979 was valued at $250.00 in mint condition, while the Red Backs complete set was just $90. (I tried to look up what the sets are going for now but just ran into what the sets go for graded and I lost all interest).

So, that was that. You didn't need to hit me over the head. Stay away from the Blue Backs.

For years, the only '51 Topps Dodger cards I owned were red backs. Duke Snider came into my possession first during a high school trade. Preacher Roe and Gene Hermanski followed.

But the other day, I started looking around at blue back prices for Dodgers. They weren't too bad. And that's another bonus of the '51 set. You don't have to put down a mortgage for these cards, because, I guess, people just don't like it. 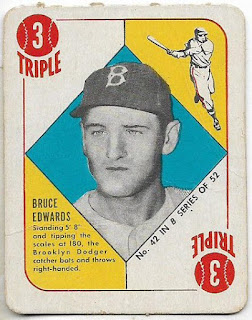 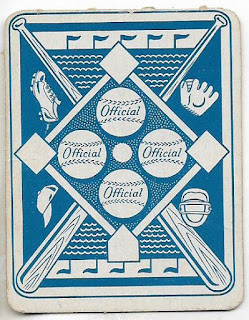 This is my first '51 blue back. It's Bruce Edwards, the Dodgers' catching back up to Roy Campanella. The blue really stands out when you're used to looking at red backs for years. It does seem exclusive.

No, I didn't pay $4.50 for this card. It isn't 1979 anymore. But it was quite affordable. The Edwards card contains a few creases but they're not too bad. The '51 set seems to avoid some of the absolutely murdered looks of other '50s cards and I think some of that is due to its diminutive size (and also probably it wasn't as popular with the kids).

I've been nosing around the remaining '51 Dodger blue backs on my list, Ralph Branca and Billy Cox. And I still need one more red back, Gil Hodges.

I expect to get them much sooner than some of the other '50s Dodgers that I need. They simply appeal to me a little more.

One more '50s Dodger card down. So many more expensive ones to go.

Johnnys Trading Spot said…
In contrast. My Braves have 4 blue backs and I have all 4. The Braves had 3 red backs plus 1 of them has a variation. I need the variation Holmes (Hartfield) and Sid Gordon red backs.
August 13, 2020 at 8:08 PM

gcrl said…
Good to see someone has that Edwards card! I still need two blue backs (including Edwards) to complete my 1951 topps dodger team set. Maybe I'll start looking for them. I've no plans to try for any more 1952 high numbers but will likely someday pony up for a johnny podres rookie and the couple other 1953 cards I need.
August 13, 2020 at 11:22 PM

Mark Hoyle said…
The Red &Blue backs were pretty painless for Redsox collector. The tough cards from 51 were the Topps team cards ,the Connie Mack AllStars and the Current allstars. Only 9 Redsox in the 52 high numbers . Took me a while. Did one card a month.
August 14, 2020 at 4:33 AM

Fuji said…
1951 Topps are fantastic. I remember reading about one of the backs being more rare than the other as a kid too. Now I know it's the blue. I always wondered why these cards weren't appreciated by collectors more.

Nick Vossbrink said…
No blue back Giants but I'm complicated by Monte Irvin and Rookie Card BS. I like how different the 1951s are buthave a hard time cosidering a release this small a "set." Definitely in agreement about Bowman being better than Topps in those early years.
August 15, 2020 at 10:45 AM