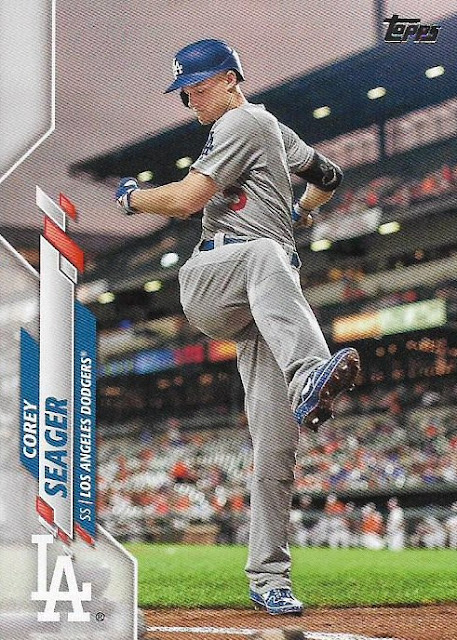 A couple of milestones -- one mine, one not -- regarding the total number of cards for a particular player, conspired last night to create this post.

Right around the time The Lost Collector announced on his blog that he had reached 1,000 Tino Martinez cards for his collection, I crossed 200 Corey Seager cards when I recorded the above 2020 Topps variation card sent to me by the Starting Nine.

Now, there are obvious differences between those two milestones, aside from the difference of 800 cards.

First, Martinez's career is over. He played for 16 seasons, primarily during the card glut of the 1990s, and for whatever reason they're still making cards of him. Seager is still playing and this is the beginning of just his sixth season.

Second, I am not a player collector. I don't actively seek out Seager cards like AJ does Martinez cards. Seager cards come to me because I collect Dodger cards, but there is no other mission.

Card companies have been issuing multiple versions of cards of individual players for more than 30 years now, and the quantities each year grew through the '90s, exploded in the late '90s and now that there are variations, parallels and online cards, it's almost immeasurable.

Cards of individual players are multiplying like rabbits and I think it's now at a rate that is more frenetic than ever.

Here is one tiny example of where we were and where we are. 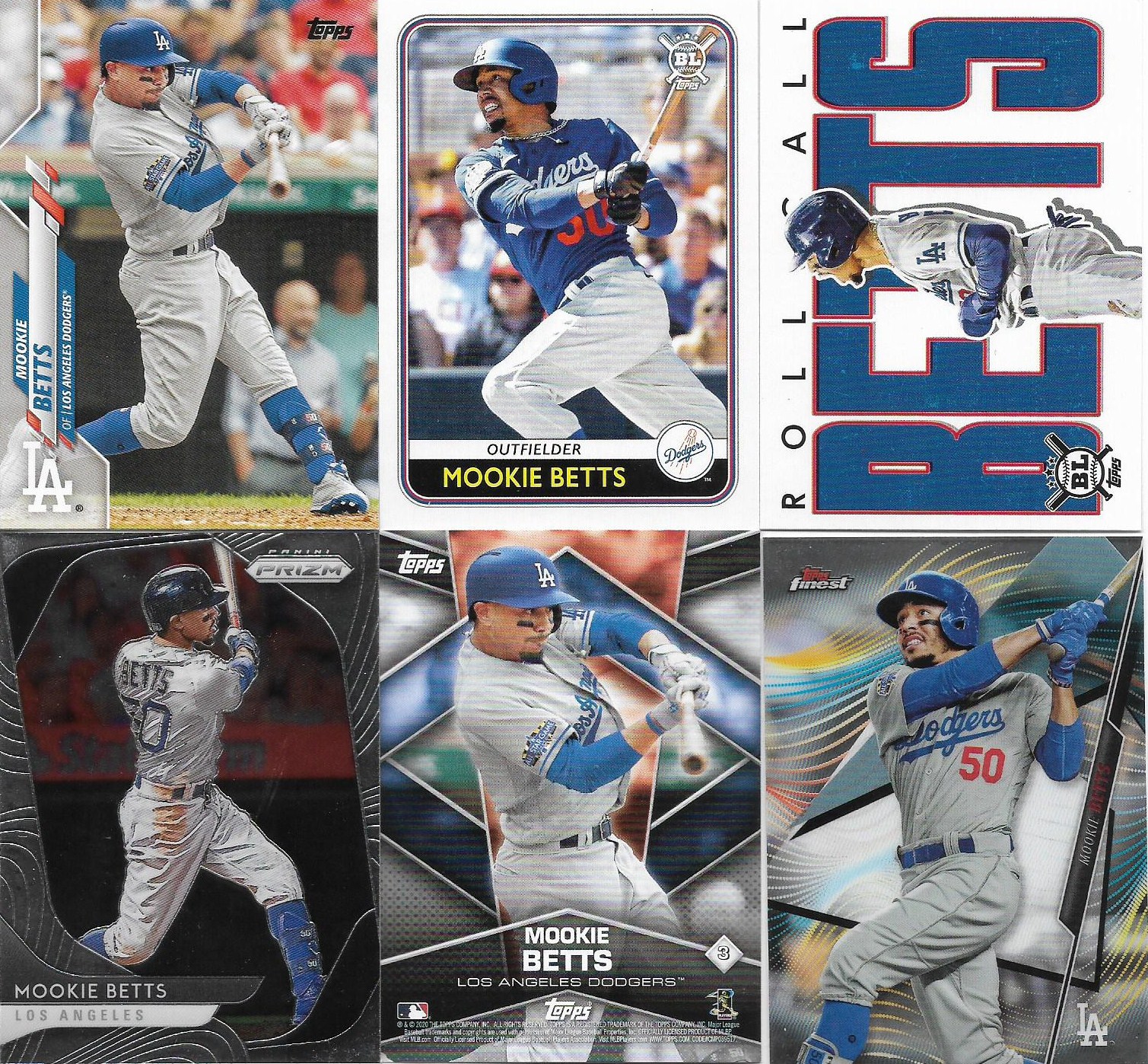 Here are six cards in my collection of Mookie Betts as a Dodger. They are the first six that I own of Betts listed as a Dodger, as he joined the team in the offseason (OK, one is a sticker back, but don't start with the semantics).

There are many other Betts cards of him as a Dodger that I don't own. So six cards of Betts at this stage may not seem like all that much ...

... unless you were collecting when I was a kid. 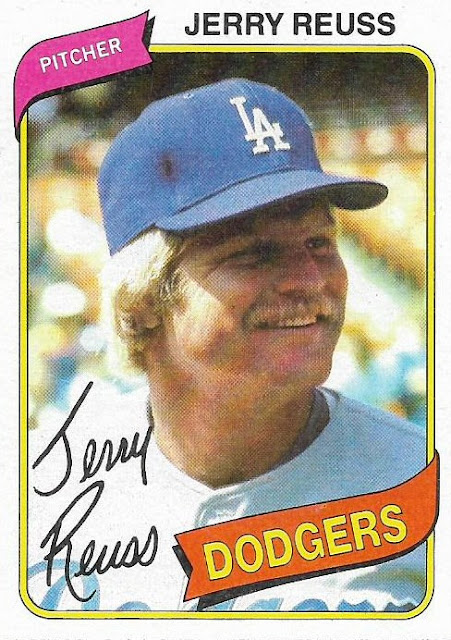 This is Jerry Reuss' first Dodger card, from 1980 Topps.

Now, I know that Reuss was not a superstar like Betts is, but I've picked him for a reason. He was definitely an All-Star, a big name for a team who rarely acquired big names (the Dodgers made big names, they didn't trade for them), and he was a notable acquisition when L.A. traded for him at the beginning of the 1979 season.

And his first cards as a Dodger arrived in 1980.

In fact, to total as many as six cards of Reuss as a Dodger, I waited until 1982 -- three years after Reuss arrived in L.A. 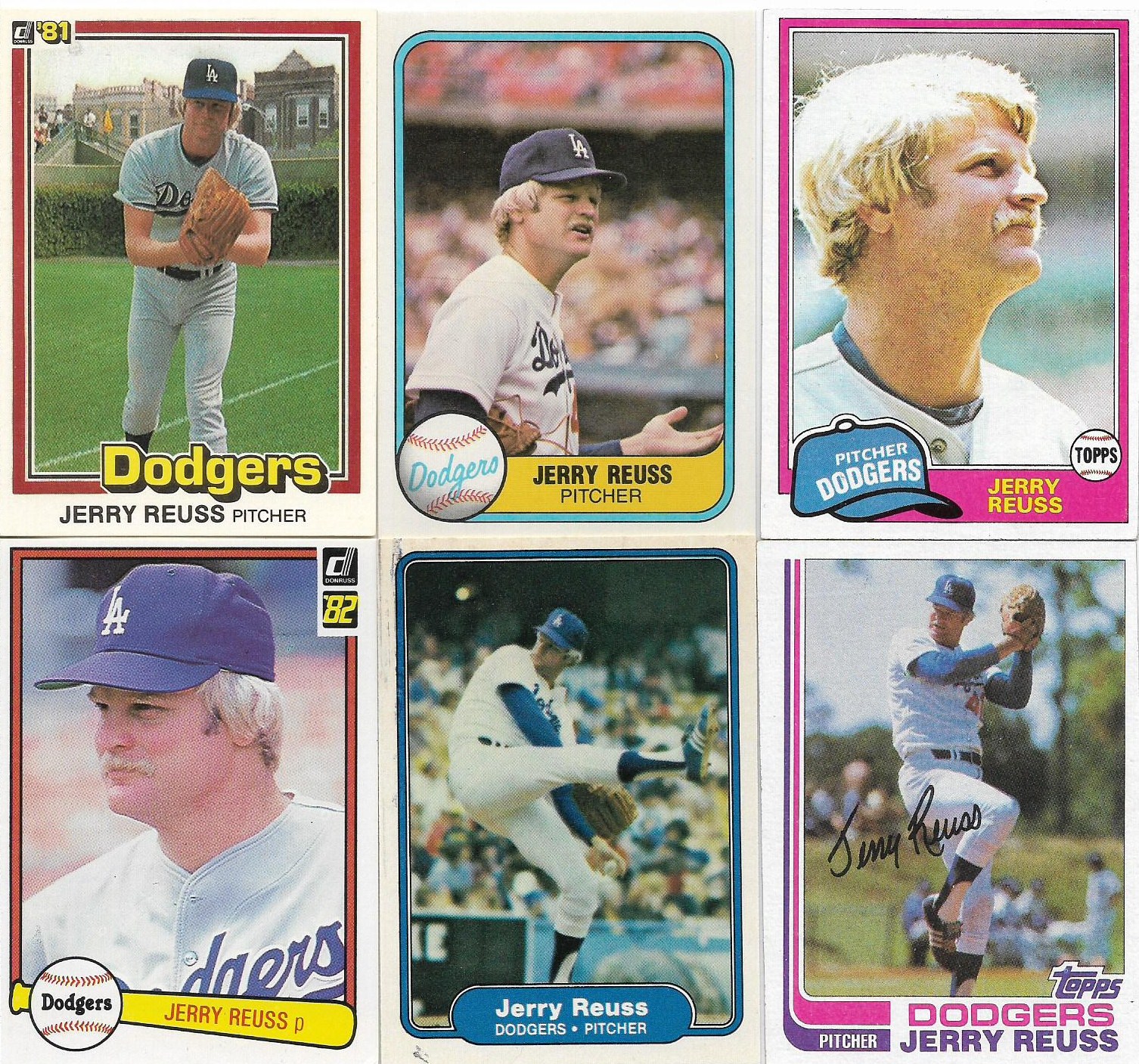 One of those cards in the bottom row, either the '82 Donruss, Fleer or Topps, was my sixth Reuss Dodger card, equaling the total number of Betts cards I now have. (Reuss had mini stickers in '81 and '82 so, again, if you want to be all-semanticy, I added my sixth Reuss a little earlier).

This is well-trod territory on this blog, I've written many times how rare it was to receive multiple cards of the same player in the same year -- how mind-blowing it was when it started happening in the early 1980s -- and still how interesting it was as I was collecting well into the junk wax era in the late '80s and early '90s.

But I still think that the sheer number of cards that are available for individual players has been increasing at a stepped-up rate in the last five years.

Perhaps that can be blamed on the run on Aaron Judge and Cody Bellinger cards in 2017. Because I have 166 cards of Bellinger, someone who has been appearing on Dodger cards for all of three-plus years.

I seem to accumulate cards of the younger players on the Dodgers -- Seager, Bellinger, Buehler -- at a much more frequent rate than other players. 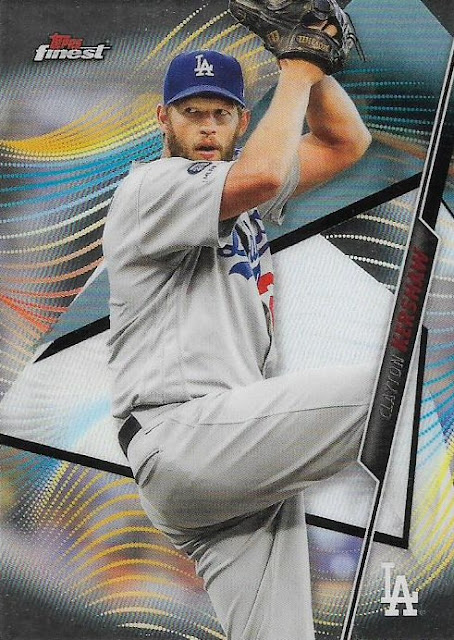 For example, this card was the 748th Clayton Kershaw card in my collection. That's a lot. But the rate of accumulation doesn't seem to be as frequent as it's been for the younger Dodgers (I'm nearing 100 cards of Buehler, who started showing up in Topps in 2018).

I'm not running any numbers on this so I can't be sure how accurate it is to know that there are more cards being created for individual players than ever before. I just know what I see.

I think I'm a good test case, because I don't player-collect. I'm not trying to get all the High Tek parallels of this guy or all the Prizm refractor colors of that guy. I don't do that.

I just let the cards come to me and make my evaluations.

This isn't a post about whether more cards of players each year is good or bad. I have my opinions and I think you know them. At my age, and with my experience, I think it would be weird if I thought any other way.

I'm just saying that "good gosh, players today have a LOT of cards."

"What are we going to do with all these rabbits?"

Peter K Steinberg said…
Here's all you really need to consider for player collectors and how 1,000 will be something at which to laugh. I give you Shohei Ohtani.
August 10, 2020 at 7:44 PM

bbcardz said…
If it makes money for the card manufacturers, they will exploit it and drive it into the ground, whether it's parallels, rookies, autos, relics, short prints, etc. Some may question them or complain about them but many more will purchase and collect them.
August 10, 2020 at 7:52 PM

Jeremya1um said…
Congrats? on card #200.
It’s kind of strange with the 6 card thing. I remember as a high schooler in the ‘90’s, I aimed to have 6 cards of players, and when I got there, I kind of considered it an accomplishment. Nowadays, if it’s the right guy, you could almost get the 6 cards in the Topps Update set. If only the last 4-5 decades could take the best things and do a mash up of all of it in sets that future generations will collect. I don’t like the way things are going.
August 10, 2020 at 8:03 PM

The Snorting Bull said…
My father always talks about Jerry Reuss. He got to see him pitch in high school They are roughly from the same part of St. Louis County, and roughly the same age. Can't talk about the 1970s Pirates or 1980s Dodgers in front of him without a good Jerry Reuss story. FYI- Jerry Reuss has an incredible Flickr page with baseball photos. Worth a little of your time.
August 10, 2020 at 8:31 PM

Elliptical Man said…
Well, there's quantity of cards being made but there's also commonality of those cards. A 3-time Cy Young winner should have a lot of cards that are tough gets.

Brett Alan said…
It certainly is a very different world. I remember in those days of the Reuss cards, Baseball Hobby News would publish a checklist of every existing card of a player. Most players only needed one page, and the type was not small.
August 10, 2020 at 10:07 PM

Fuji said…
At this point in my life, I'm glad I don't super collect anyone in particular, because it seems like collecting would be overwhelming and possibly stressful. That being said, I realize that at least some of the super collectors out there enjoy the thrill of the hunt. I enjoy getting new cards for my collection when they're cheap or when someone sends it to me. If I end up with a specific card in my collection, it's gravy. If not... well like you said... there are plenty of rabbits out there to collect. Que sera sera.
August 11, 2020 at 12:00 AM

Bo said…
Part of the perception is that it is a lot easier to get all of someone's cards in 2020 then it was in 1982. According to TCDB, Reuss had 21 cards/stickers as a Dodger by '82. Chances are you were not aware of most of them, only a hardcore collector would have been. Which you weren't then, but certainly are now.
August 11, 2020 at 9:55 AM

Nick Vossbrink said…
I don't supercollect Stanford guys but even at a retail base level it's fascinating to see how guys get trendy in the hobby and then tail off just as fast. A lot of it is rookie stuff but sometimes a guy becomes the face of a franchise (for some reason Piscotty was the go-to A's player for a while) later on too.
August 11, 2020 at 11:00 AM

Steve at 1975BaseballCards.com said…
The difference between the Betts and Reuss cards is that the Reuss ones are interesting. Most of the hundreds and thousands of Betts cards are like what you showed, essentially the same photo plastered on different backgrounds. Yawn.
August 11, 2020 at 11:12 AM

Some of those 21 Jerry Reuss cards/stickers are collecting options by today's obsessive player-collector standards. O-Pee-Chee gray backs and counting a divided-up '81 scratchoff as one "card" and an intact scratchoff as another -- not only did we not know about them, but they would not be things we would collect back then.
August 11, 2020 at 11:56 AM

bryan was here said…
I'm pretty sure I have more Bert Blyleven cards from after his career than from during.

Thanks for using Jerry Reuss as a comparo. As well as the aforementioned Flickr page (which is outstanding, by the way!) he also shares one of his photos every Saturday on the Baseball In The '80s Facebook page.
August 11, 2020 at 6:55 PM

GCA said…
This is why I won't collect current superstars. My Jim Palmer collection is the largest PC I have, and it still fits with Mike Mussina (as an Oriole only) in a four inch binder.

Can't imaging trying to get even all the basics to one of today's big names. Posted about it in 2018 here: https://thecollectivemind.blogspot.com/2018/03/dont-know-how-they-do-it.html