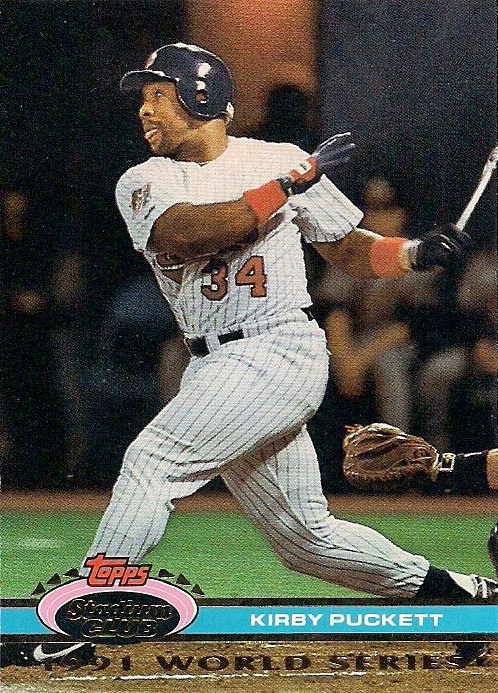 Every five years or so, Topps comes out with a new Stadium Club product and we are forced to address something that a few of us are loathe to admit:

Yep, Topps has still got it.

Stadium Club is that rare product in which most collectors can agree: it is one of the best-looking sets available. When Topps focuses on providing the best photographs of the best players, it cannot be beat, at least not while Upper Deck isn't around.

I think that when Stadium Club appeared every year, eventually collectors grew immune to its charms. There were so many other companies and sets that were doing the full-bleed thing, Stadium Club didn't stand out anymore. And I think the Stadium Club brand also grew weak. The early aughts was not a good time for SC.

I think that's why this format -- Stadium Club popping up every half-decade or so -- works best. We fall for Stadium Club all over again. Absence makes the heart grow fonder. It also helps that Panini is the only thing considered competition these days.

This latest incarnation of SC has also made me notice that even though I complain about the sameness of full bleed sets, and even though I constantly confuse late '90s Stadium Club sets because they all seem to look identical, each set does have its own identity. And most of all, each set is consistently great. It's as if everyone at Topps puts on their "OK we're really going to try hard on this one" hat whenever it's Stadium Club time and this is the result.

It all began with 1991 Stadium Club, which you saw with Kirby at the top of the post. It was Topps' first premium set and didn't we all notice.

But let's take a look through each year of Stadium Club. 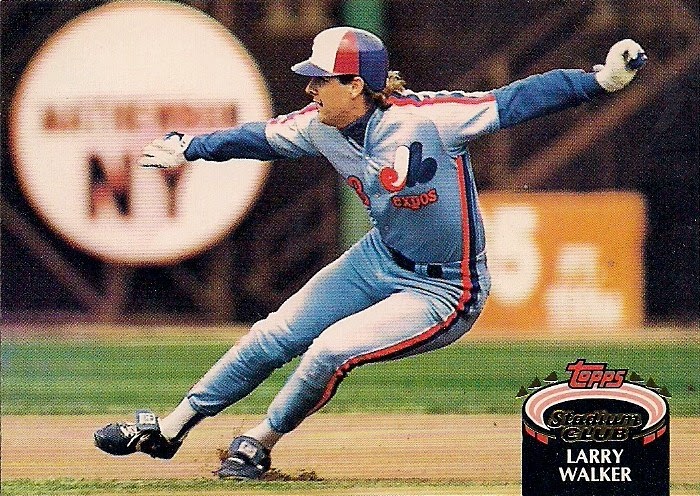 Of course, one of the best parts of early Stadium Club, and why did they ever stop doing this, was the rookie card reference on the back. 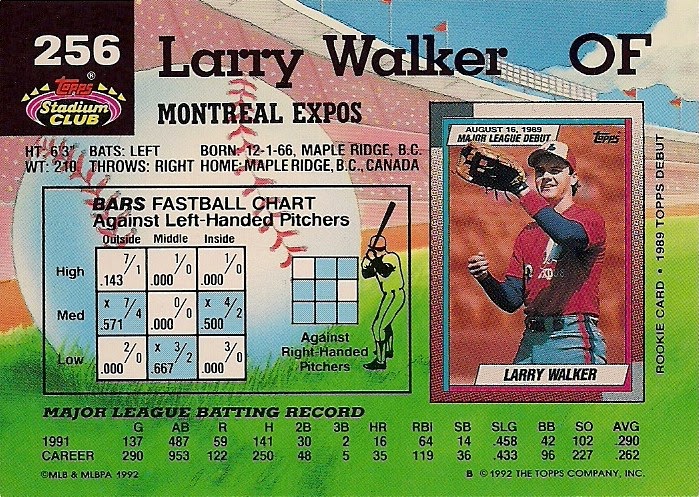 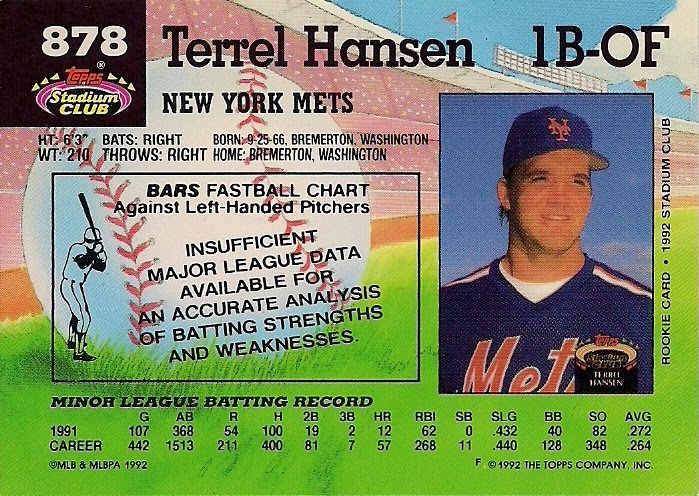 That's about as self-referential as you can get. Terrel Hansen's rookie card is the card you're holding RIGHT NOW!

But one element of early Stadium Club that I did not like was that Topps sometimes approached its picture-taking in the same manner as with its base set. But taking a picture of a guy just standing there is only OK if you have some sort of border as a buffer.

Stadium Club had no border buffer: 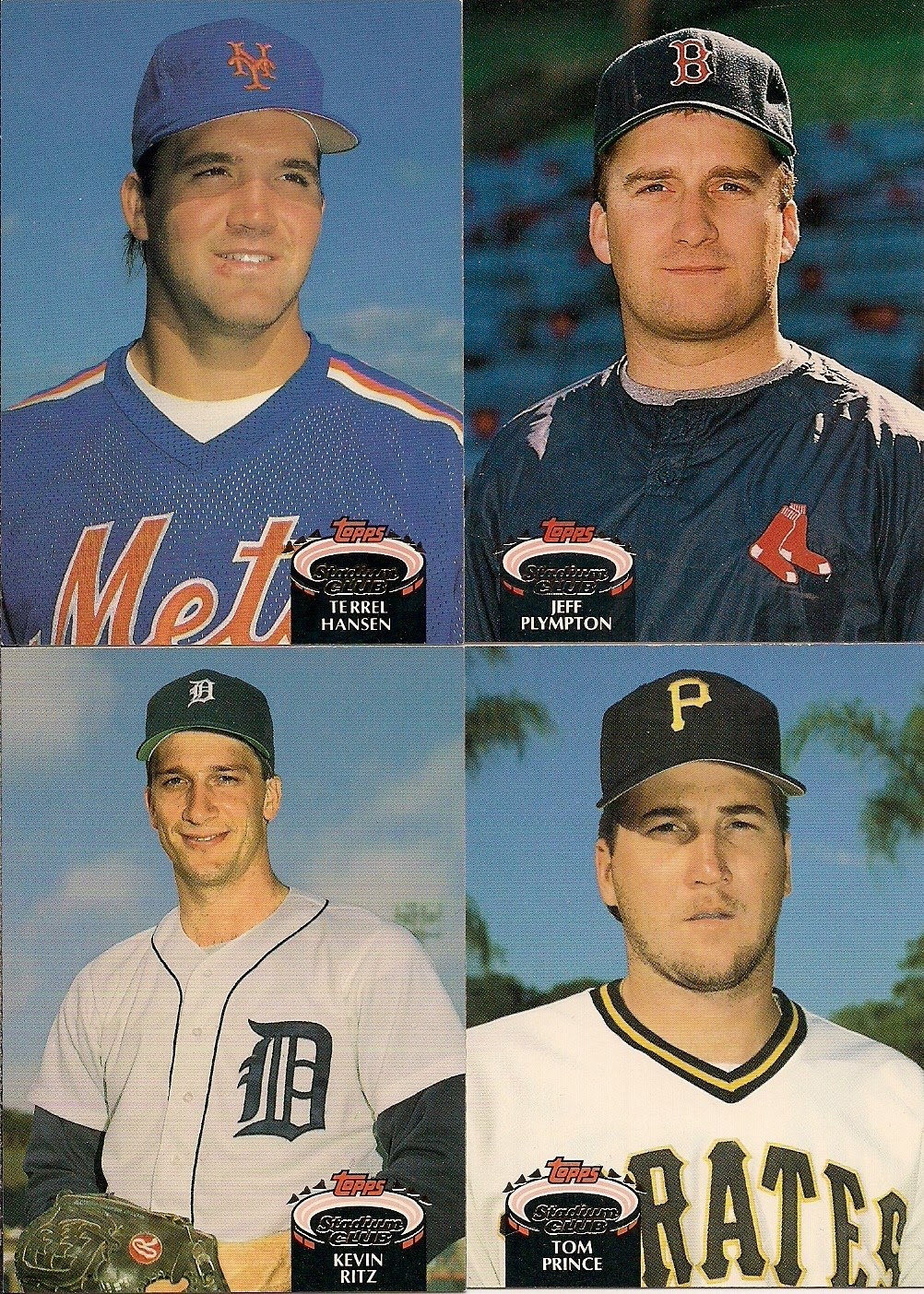 These are among my least favorite cards. Put one of these on the night stand and you'll never go to sleep. 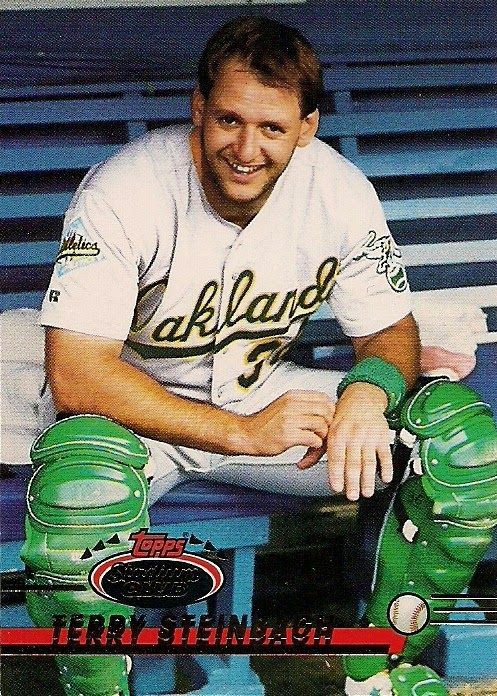 In 1993, Stadium Club added a little red to the proceedings. Because of the added color and the simplistic streaking baseball, this SC set isn't as classy as the earlier versions. But the photography is just as great. One of my all-time favorite baseball cards is the 1993 SC Marquis Grissom.

This is also the final SC set that would show the player's rookie card on the back. I just know Bowman is behind this terrible decision. 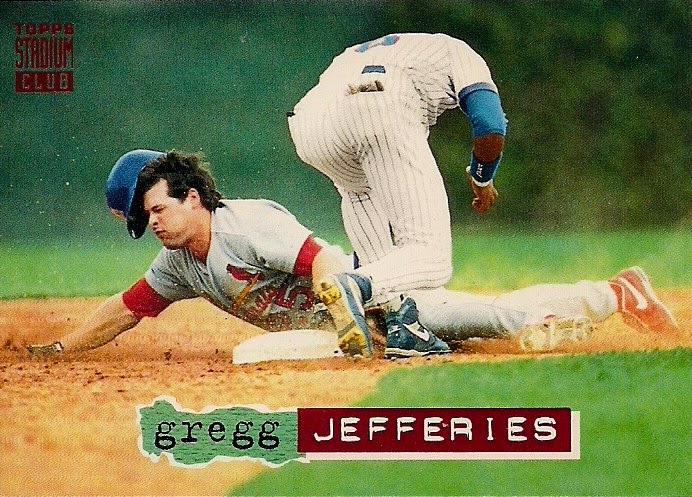 Welcome to the mid-1990s, where everything had to look like it was freshly ripped out of a magazine and typed by a serial killer. News anchors were wearing leather jackets and every other word was "extreme".

This marked the beginning of my questioning of fads. Whereas before I would go along with whatever was cool at the moment (I think I've hidden all of the photos of me wearing Ocean Pacific clothing), I now questioned whether writing every letter in lowercase was a wise decision.

But the photos in Stadium Club? Still great in 1994. 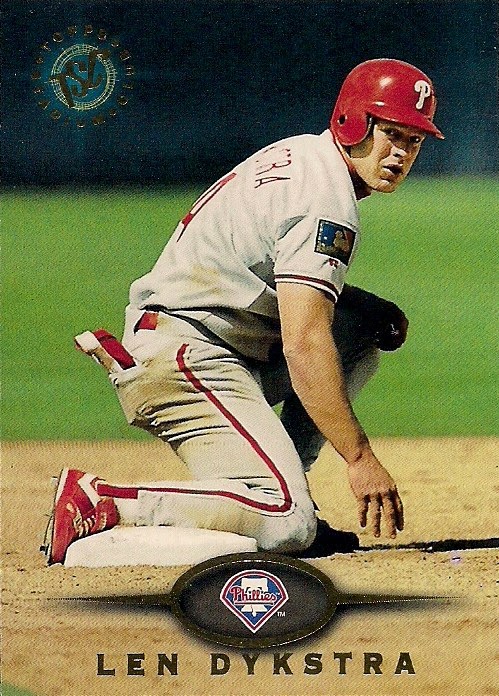 1995 Stadium Club marks the period in which I started confusing the sets. The reference point for past sets is design and SC features minimal design.

The saving point for '95 SC is a new SC logo. This helps me realize that this set came out in '95. 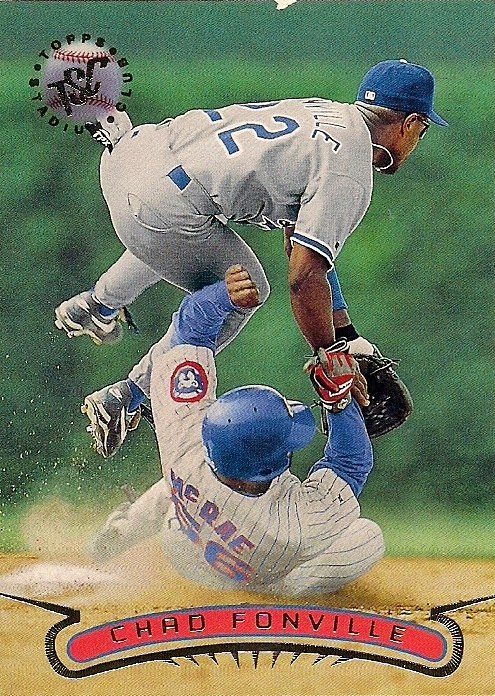 More terrific footage in 1996 SC. The question I have for this card is the white fabric at the top edge. No, that is not a card rip, that is something in the photograph. What is sailing over Chad Fonville, who is sailing over Brian McRae?

Also, in case you didn't realize we were in the mid-1990s, a reminder: 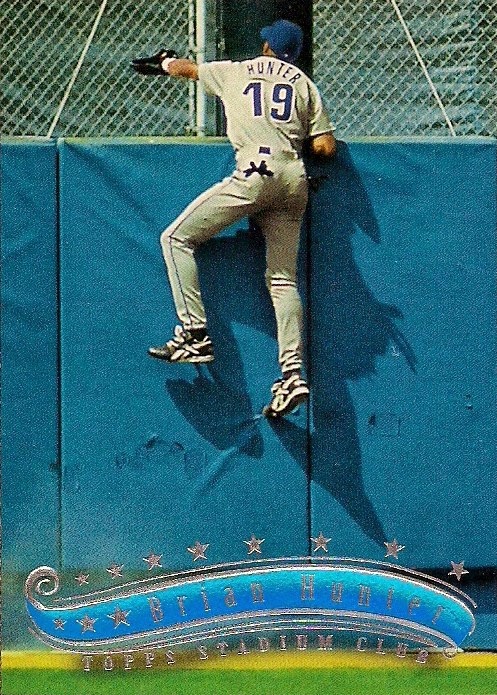 1997 Stadium Club has a terrible habit of curling up, possibly because the design swoosh is indented. The curling is not extreme (there's that word again), like 2010 Chrome, but it's a little bothersome.

Can't complain about the photos though. 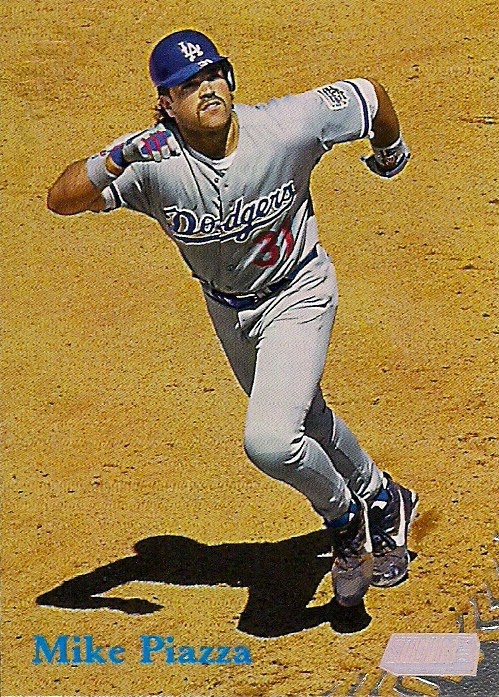 OK, 1998 Stadium Club. This is where real confusion reigned. I did so little collecting during this period that I'm just now figuring out which SC set is which. I have fewer '98 SC cards than almost any other SC set.

This card shows another attribute of Stadium Club: dirt.

It's also the debut of the Stadium Club logo that survives to this day. 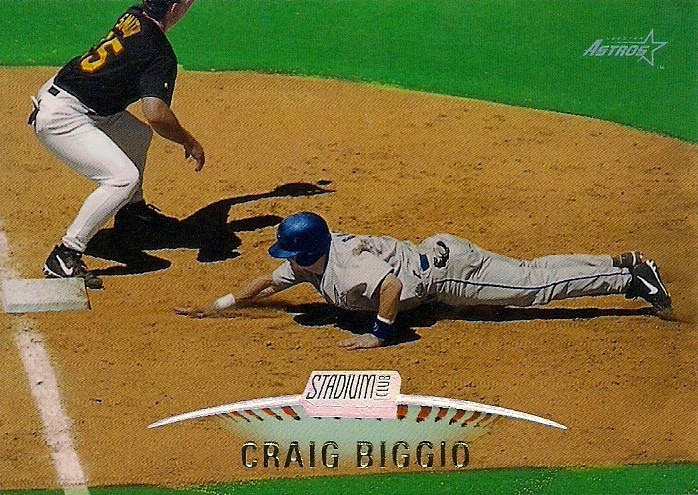 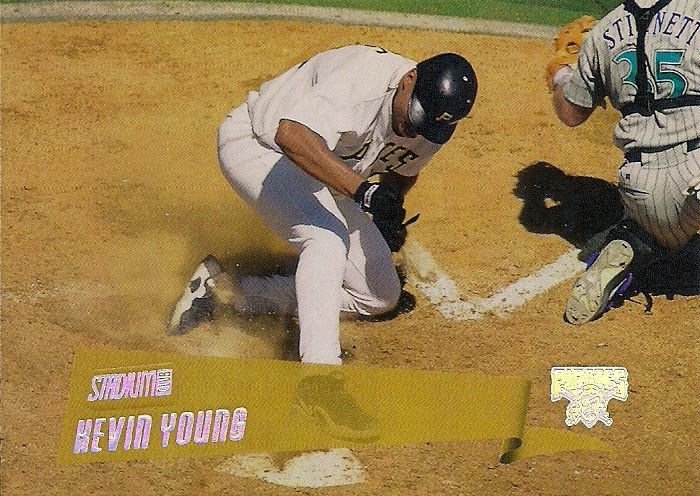 Yes, dirt. But 2000 Stadium Club is when the design element began to infringe on the photo. This is not a good place for a pennant flag. Didn't we learn anything from 1996 Donruss? 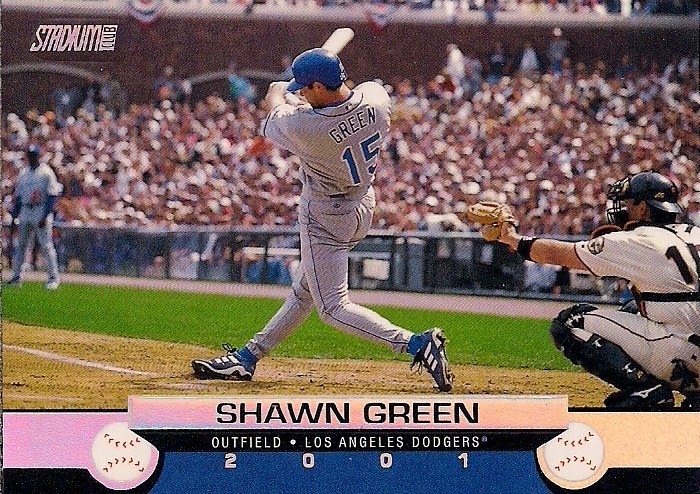 2001 Stadium Club designed a little flat-bed vehicle with baseball wheels for the bottom of the card. When I look at cards from the set, all I see is that little cart and not the photo. That's unfortunate because Stadium Club's only purpose is for you to look at the photo. 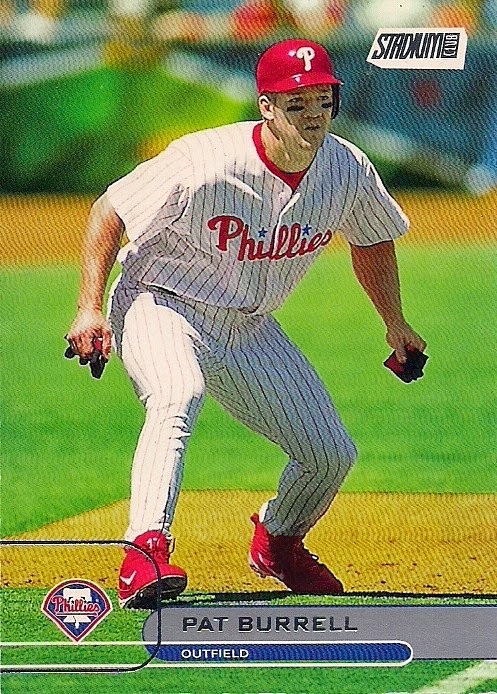 2002 Stadium Club added an element of silver to the design, which always looks gray and drab to me. I also confuse it constantly with 2003 Stadium Club because this: 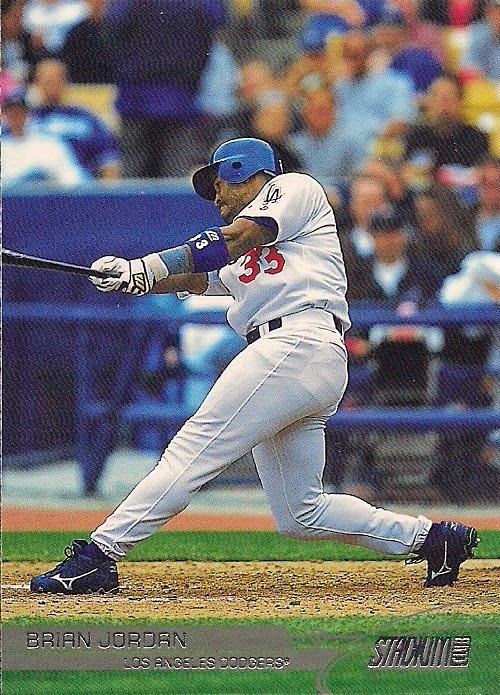 More gray. Except really, really, really boring. Probably my least favorite Stadium Club set. I can understand focusing on the photo, but this looks like Stadium Club doesn't want you to know the name of the player -- or the team -- or who made the card.

Stadium Club went away after this for five long years. And then there was much fanfare when Topps announced that it was coming back.

In 2008, Topps brought back Stadium Club but ruined it for collectors by short-printing base cards and producing more than one version of rookie players in the base set. If you look at early posts on this blog, it's a lot of whining about '08 Stadium Club.

But still the cards: 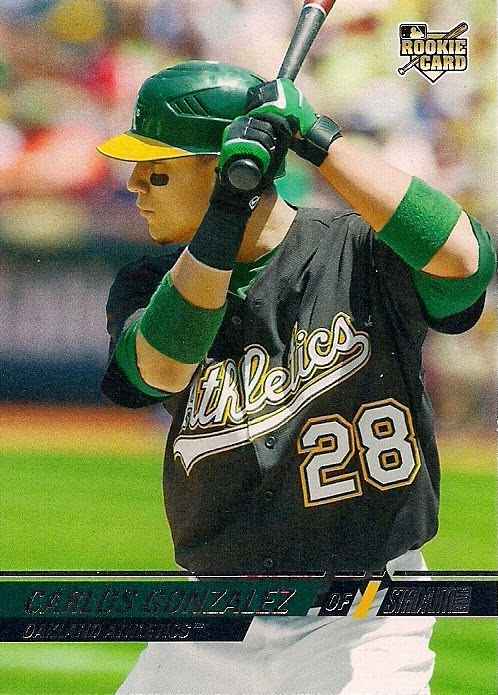 Love the nameplate, love the photo, love THIS CARD.

This is still a set I need to complete -- just six short-printed cards to go -- but I keep pressing on because Stadium Club was so good this year, even though it was very, very bad. 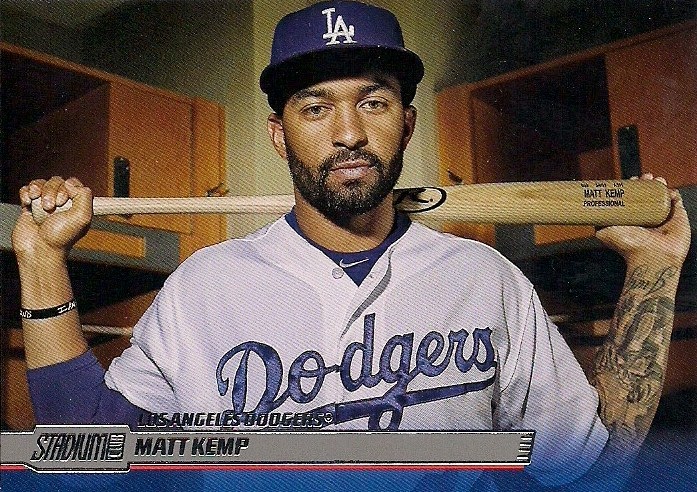 So that brings me to 2014 Stadium Club, which I've already addressed. The brand is as good as ever, with some of the best cards that we saw all year. Unfortunately, it is hobby only.

The 2014 set is so good and has been so well-received that Topps recently announced plans for a Stadium Club set in 2015, which would be the first back-to-back Stadium Club sets since 2002 and 2003.

Here is the image that they sent out as a promotion: 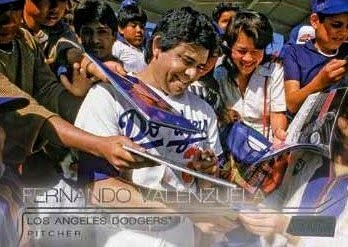 It looks like I'll be collecting at least one modern card set next year. If I can find a card shop, that is.

Hackenbush said…
I caved and ordered a box from Dave and Adam's. Unfortunately they're sitting on my order from over a week ago. I don't know if it will ever ship.
December 7, 2014 at 7:30 PM

deal said…
Hackenbush. I don't know if the events are connected, but raised a similar issue via Twitter because D&A hadn't shipped and it had been 4 days. Minutes Later I get EM from them and it sed my order had been packed. UPS has record of it. Not sure if that got it moving but I don't think it hurt.
December 7, 2014 at 9:13 PM

Sooz said…
Nothing on this year's solicitation from Topps said anything about it being just hobby for 2015.
December 7, 2014 at 9:20 PM

Nick said…
I think '99 Stadium Club might be the most underrated in the brand's history. Lots of solid photos, even if it's not all that well-remembered these days. That Biggio is one of my favorites.
December 7, 2014 at 9:22 PM

Hackenbush said…
I emailed them. It's actually the second time. The day after I placed the order it still said payment pending. Their response to my email said it would ship in the next day or two. They must be messed up because of the sale. It'd be nice if they second day aired my box. We'll see. Sorry to hijack your blog for my own problems Night Owl.
December 7, 2014 at 9:22 PM

Ana Lu said…
I've read many posts about this set throughout the years but never got myself into buying a pack..
I love the photos and that is 70% of what I like in a baseball card. But then I look at the card design and it's a complete turn off.
And like you said, this year set looks great! But it's a hobby thing which means is a money-maker-for-Topps. I don't like those sets.
Perhaps in 10 years we might buy these cards with no problem of being a hobby thing because there might be more brands again than only Topps.
December 10, 2014 at 4:37 AM