Stats on the back 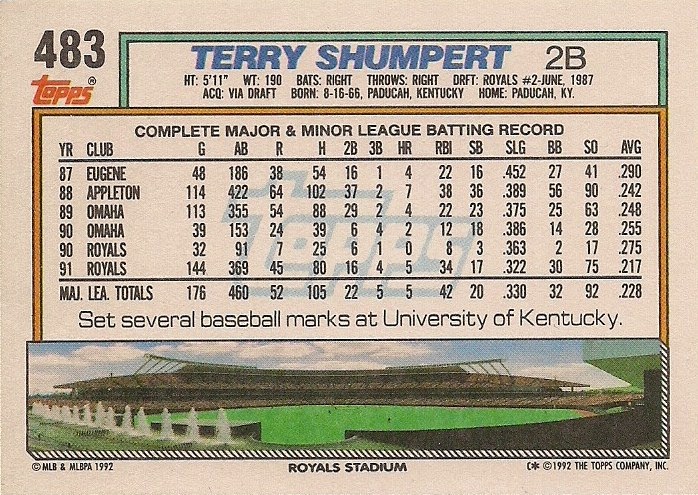 Do you remember when the most exotic statistic on the back of a baseball card was slugging percentage?

When slugging percentage first appeared on Topps cards in 1981, it was one of those statistics that had to be explained. As a young fan, I was used to automatically understanding every stat. Batting average and earned run average were the only measures that took a little calculating and they were easily grasped.

But slugging percentage -- which I'm quite sure I first saw in The Sporting News -- took a few attempts. It wasn't mentioned much during games on TV and didn't appear in boxscores or on the backs of baseball cards. Looking at it now, it was remarkably easy to grasp, too. It's merely dividing total at-bats into total bases. Like so:

I added it to my repertoire in no time.

Unfortunately, using statistics to support my arguments is no longer an option. I left numbers behind for letters a long time ago, and while I was away, the numbers expanded and morphed into larger and more complex formulas until I have no idea what they mean.

I'm relieved slugging percentage (SLG) is still there. And batting average (BA) and on-base percentage (OBP). (I hope "PA" is still plate appearances). And I finally committed myself to learning "OPS" a few years ago. As for the rest? Well, let's just say I didn't know there was a "rookie card" (RC) stat.

This doesn't mean I have a problem with these newer stats or don't respect them. I'm just saying I don't have the time nor the faculties to devote to stuff like this.

That's kind of sad because baseball cards are starting to add these more advanced numbers. 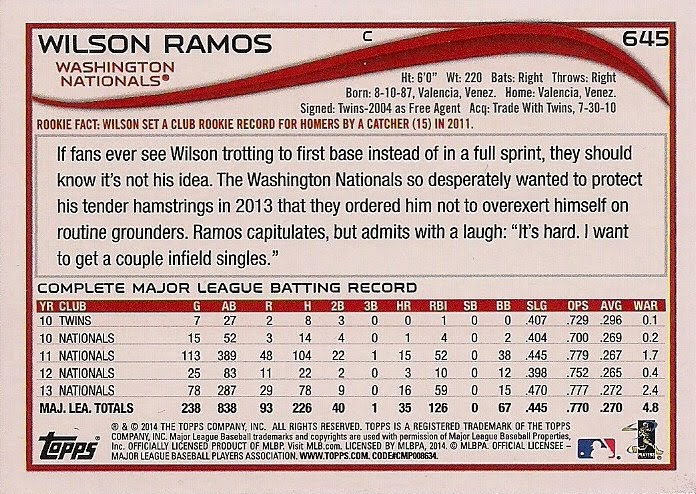 And because of that, for the first time in a long time, I can't say that I completely grasp every single number on the back of a baseball card.

"WAR" which has been around long enough that I now know the basic concept, is still a little foreign to me in that I don't automatically know what a good WAR is. Give me five minutes to wander around baseball-reference and I'll figure it out, but I used to be able to look at the back of Mario Mendoza's baseball card and know instinctively: "He batted .205??? That SUUUUUUUUUUUUCKS!"

I'm not doing that with WAR. I know it can be done. But I'm too busy.

I've been so busy that last winter when news of variation cards in the 2014 Topps set first hit -- these variations featured sabermetric statistics rather than your average garden variety stats -- I thought, "I guess I better check out whether I have any of those" and then promptly forgot about it for months.

It wasn't until One Man's Junk (Wax) posted about the variations yesterday that I thought, "Gee, I forgot I was going to check those."

So today, I looked through the meager number of 2014 Topps that I have like a good little numbers nerd -- or is it baseball card nerd? -- and did find one sabermetric variation card. 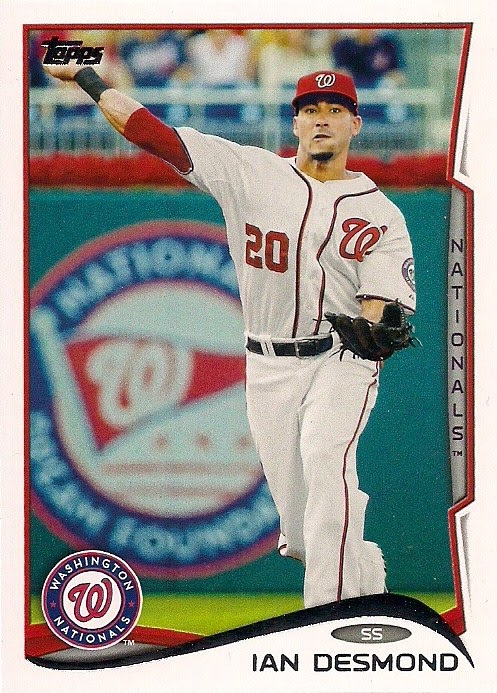 It's Ian Desmond's card, because I'm always pulling rare or desirable Nationals because there are no Nationals card collectors.

Here's his sabermetric back: 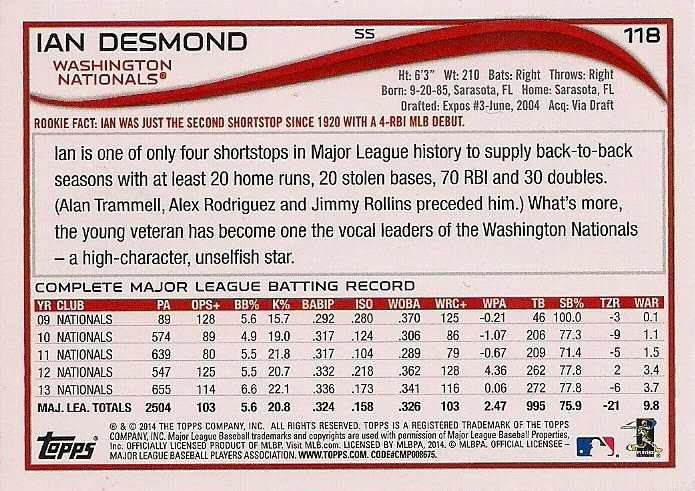 As you can see, the pedestrian 2Bs, 3Bs, HRs, etc., have been replaced by exotic K%, WOBA and TZR.

I don't know what most of these stats mean. If this is what baseball card backs are going to look in the future, I better start taking some night courses.

I'm sure I could figure out a few of these very quickly, and most of the others I would grasp with some research, but only until they eventually fell out of my head in order to store a new website password into my brain.

I will say it's an interesting variation. But I'm not much into evaluating players anymore. I know others love to evaluate (boy, do they ever), and that's cool, especially if you hope to be a GM one day.

But I'd rather just kick back, pop open a beer, root for my team, and talk about who I like and who I don't.

And bore people about the days when slugging percentage was exotic.

madding said…
I love OPS. OPS makes sense to me, because there's a formula to it based on things that can be quantified. It's harder with some of these other stats that are more subjective. I'm pretty pro-sabermetrics in general but I don't really spend a lot of time thinking about these advanced stats and what they might mean unless I'm looking for something specific.
December 5, 2014 at 8:20 PM

Commishbob said…
"....But I'd rather just kick back, pop open a beer, root for my team, and talk about who I like and who I don't.

And bore people about the days when slugging percentage was exotic....."

Zippy Zappy said…
Personally I love using/citing any stat that makes my favorite player(s) look better than they actually are.

I have a feeling you'll grow to be a little more familiar with WAR as time goes on since Kershaw ranks very highly on most WAR rankings (I believe he was second overall to only Mike Trout this year) and will probably continue to do so until he retires. Be careful though, most sites have their own formulas for WAR (fan graphs and baseball reference for example have different equations) so sometimes the WAR you'll start seeing on these cards might not match up with a random WAR stat you looked up online.
BTW, if you're looking to trade that Sabermetric back Desmond I'd love a shot at it. I'm a saber-head ;P.
December 5, 2014 at 10:10 PM

"Batting Average on Balls In Play" may be a useful statistic, but I love it because it's fun to say.

Anonymous said…
I love the advanced stats, but I hate the labelling of WAR on this card. My 1st thought was "Baseball Ref's or Fangraph's version?" So I checked, and discovered they're not using either (Ramos's WAR doesn't match up to either versions). That's kind of confusing.

Tony L. said…
I'm a believer in the sabermetric stats, but with the Bill James caveat: if you're going to divide A by B or add A to B and multiply by C, there had better be a damn good reason to do it. Otherwise, you're just confusing the issue and creating useless trash.
December 6, 2014 at 11:48 AM

Josh D. said…
At least everyone has retired the use of the worthless "GWRBI."

Ana Lu said…
What a bloody hell is that card back!?
I think I just go with the trivia and nothing more..Those stats are a nightmare!
December 10, 2014 at 4:43 AM