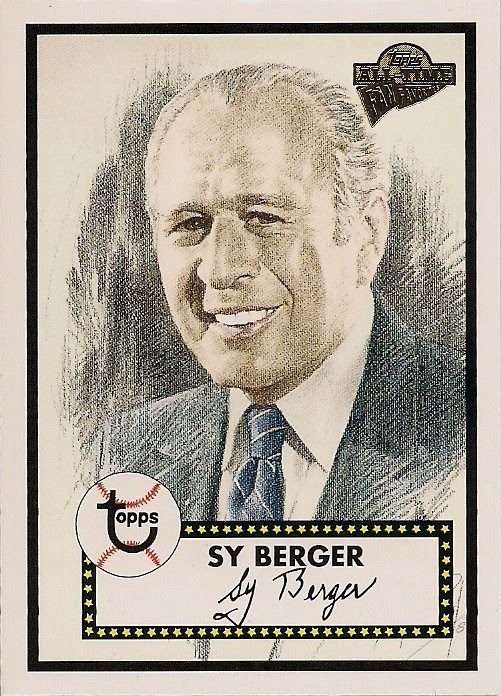 My mother-in-law died about a week-and-a-half ago. She, of course, brought my wife into the world, someone who has shaped my ideas and direction in so many ways. My mother-in-law didn't have a lot to do with my hobby, although she did buy me this, which I use to this day, a lot.

Today, I found out that Sy Berger died. Berger, as many know, is the father of the modern-day baseball card. He brought my hobby into the world. Responsible for turning Topps from a simple gum company to a name that has evoked images and memories of trading cards for generations, Berger is remembered for creating the iconic 1952 Topps set; setting the industry standard for many trading card fundamentals like stats on the back; crushing the competition for decades; and of course dumping cases of 1952 Topps into the ocean.

Berger befriended hundreds of baseball players, signed them to contracts for "steak money" (5 dollars), and put their pictures on cardboard that was the perfect size for clutching and crumpling by 9-year-old boys. 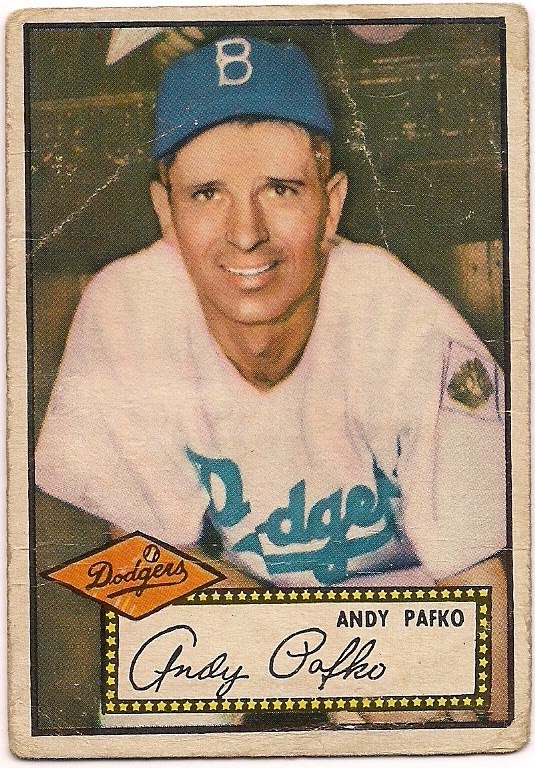 Berger and Topps came along at the right time, during the post-war boom, amid a generation focused on youth and an America ready to recreate. Baseball had never been better nor more appreciated than during the 1950s. But Berger also knew what to do with the opportunity.

Topps, thanks to Berger, was thriving and the only card company around when I started in the hobby in the mid-1970s. It had been that way for years, basically since Topps bought out Bowman in the mid-1950s. 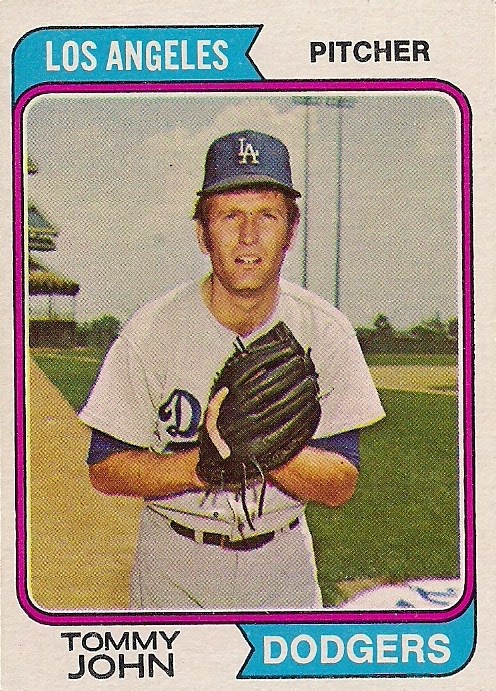 By the time 1974 arrived, Topps was so ingrained into American culture that even people like my mother, who still has never watched a full baseball game in her life, could spot baseball cards at the market and know that this would be something that her boys would like.

From the moment I pulled that Tommy John out of a cello pack, I was fascinated by the concept that Berger had imagined 22 years prior. 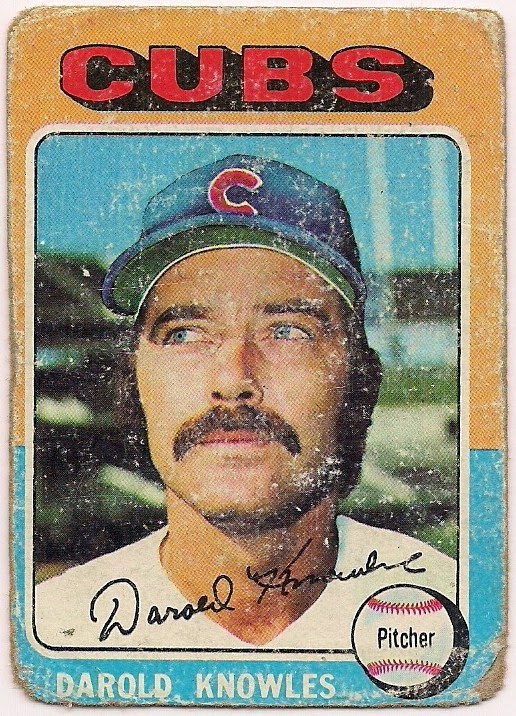 I credit Berger for who I am. Yes, I am a father and son, brother and husband, boss and employee, writer and editor, but I am also a card collector. The hobby defines who I am, and even though I left it for 10 years or so, it never left me. I've always been a card collector.

The cello pack of '74s turned me on to what was possible. But when I purchased my first packs of cards with my own money the following year and pulled this Darold Knowles card (yes, this very one), from the first of three packs, that's when I knew there was no going back.

I had found one of the loves of my life.

I had no idea who Sy Berger was then, and probably wouldn't know for decades to come. 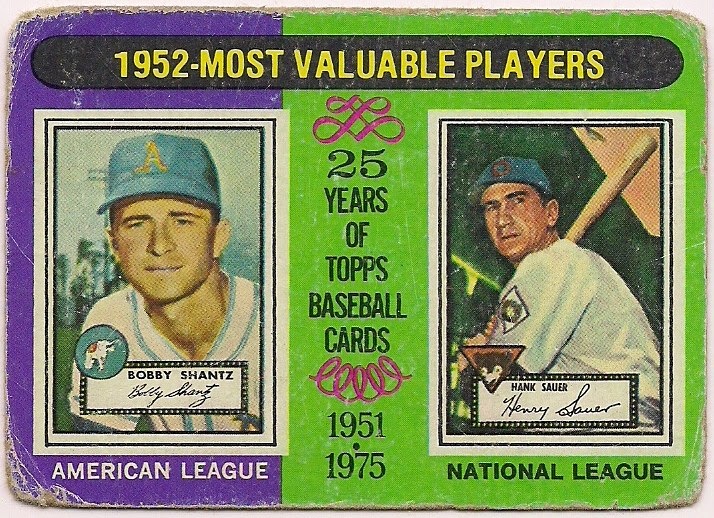 But in those first three packs was a card that paid tribute to Berger. Yes, it was a self-congratulatory piece of cardboard, but if I looked closely, I could see his handiwork in the pictures of '52 cards of Bobby Shantz and Hank Sauer.

Since those days of my childhood, the trading card industry has experienced booms and busts, sold millions, spawned dozens of companies, and morphed into a business that caters to adults, not kids.

Its transformation has made quotes like this from Berger, from "The Great American Baseball card Flipping, Trading and Bubble Gum Book," seem quaint:

"I get calls all the time from different people, asking how they can get complete collections of cards," said Berger in 1972. "I have to tell them I have absolutely no idea. When (baseball commissioner) Bowie Kuhn asked me for a set of Topps cards a few years ago I had to buy one from an ad in 'The Sporting News'. We don't do any selling directly to collectors. We're only interested in doing business with kids."

Berger retired from Topps 17 years ago and became a consultant for the company until 2002. I've wondered a few times what he thought of how Topps produces cards now, with the oversaturation of sets, the plague of parallels, and other common complaints about modern cards. He was a businessman and maybe he saw it as inevitable progress -- you have to change with the times to stay viable and make money. But I'm sure he didn't agree with everything.

Still it was always comforting to know that Berger, a guy who also collected cards as a kid, knew how cool his profession was.

"I wouldn't trade places with anyone in the world," he said in 1972. "This is the kind of job you couldn't even invent."

There aren't a lot of people who I've never met who I can say shaped my life forever. Berger is one of those people.

I can't think of a better childhood for myself, opening colorful 1975 Topps on a sunny day while walking home from the drug store, or in my hotel room on vacation, or in the schoolyard during recess. If Berger never existed, would cards have been around then? Would I have enjoyed my childhood as much or remembered it as fondly as I do?

I think the answer is obvious.

Berger made me who I am. He made every card blogger who he or she is. The fact that the hobby still exists and will for years to come is his doing. 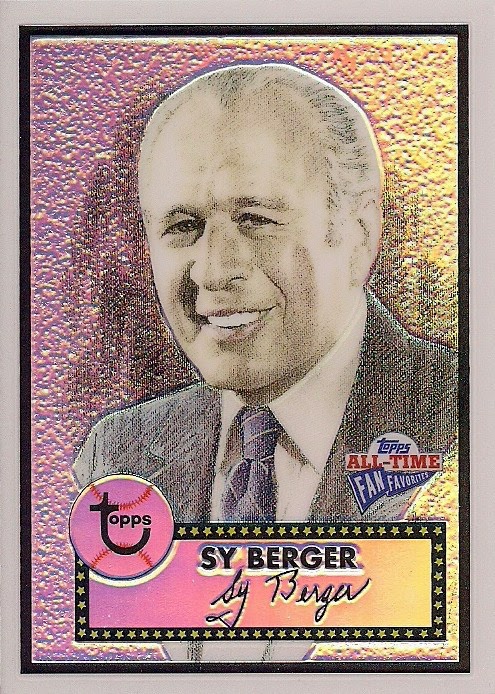 Rob said…
Ashamed I'd never heard of Mr. Berger prior to his passing - this with three decades of factory sets in my possession. RIP to both him and your mother-in-law...
December 14, 2014 at 9:16 PM

AthleticGigantes said…
Your reflections are well written and I share much in common with your feelings and experiences collecting during the same time period. Although I was born in this country I grew up in two cultures, that of my parents' and America, and cards became an important "tool" that helped me assimilate to this culture and my newly found friends at school trading cards. Baseball and cards helped me fit in with the other kids and helped define for me the dual culture life I lived. Mr. Berger ' s "job" helped me in more than one way that I'm sure would not be found on his resume, but I sure appreciate his work.
Also, my condolences on the passing of your.mother in law. My mother in law was the only person who bought me cards for Xmas, the complete set of that years Topps cards, until her passing 6 years ago. The healing process takes time to adjust to so much patience, love and understanding must come from all in the family. I wish you and your family all the best this season.
December 14, 2014 at 10:34 PM

Mark Hoyle said…
My father in law picks up cards here and there for me.. Love the post. Sorry to here of the loss of your mother in law
December 15, 2014 at 8:53 AM

Scott Crawford said…
First and foremost, I'm very sorry for yours and your family's loss. Love and strength to you all.

With that said, this is a beautiful post, one that I've already shared with friends outside the card hobby to help give them some perspective on what a loss this was and is, and how important a guy Sy Berger was. Thanks for writing it.
December 15, 2014 at 5:21 PM