The best Dodger cards ever made countdown: 60-51

Just got back from the store where I bought a few discounted cards. I haven't opened any of them yet, so you're getting this post from someone high on the buzz of What Might Be.

Realistically, the chances of them being anything worth showing here are remote. And given that this is a post of the Greatest Dodger Cards Ever, I don't know why I'm even bringing it up. I've just got to clue you in on the latest lowdown, I guess.

Today's group of 10 great cards will bring us to the halfway point of the countdown. I've seen what cards are left remaining and they're all fantastic. I'm sure by the time you see all of them, I will have converted at least some of you into Dodger fans.

But the Dodgers don't need any PR from me. The cards speak for themselves. Time for cards 60 through 51: 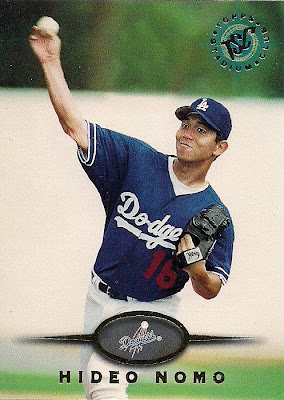 Nomo has close to 20 different rookie cards. Selecting the best out of that many cards is difficult, especially since they're all basically the same. But a card of Nomo at the height of Nomomania is a must, so I settled on his Stadium Club card. It's one that's cited a lot when Nomo's rookie cards are the subject. I like it for its simplicity. 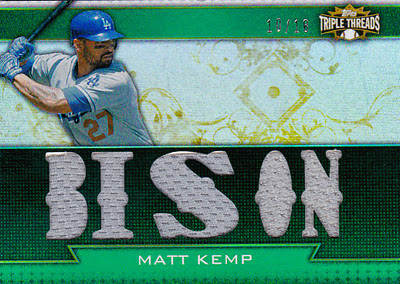 Traditionalists will scoff at this card being in the countdown, and it's true, it's not exactly in the spirit of this whole exercise. However, it's a fantastic card. As Triple Threads cards go, it's understated (if that's possible). Plus I like it because it features Kemp's nickname in all its glory and, good gosh, the card is pretty. And exclusive, too. It's also the last relic card you'll see in this countdown. 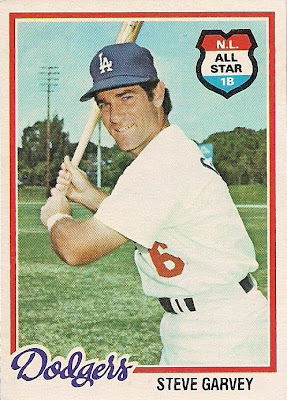 There are Garvey cards that I like more and that are ranked higher on this countdown. But I can't deny that this card probably sums up Garvey better than any other. From the All-Star shield, to the memorable batting stance, to Garvey at his clean-cut best, right down to the politician's smile, this card oozes everything that No. 6 was all about. 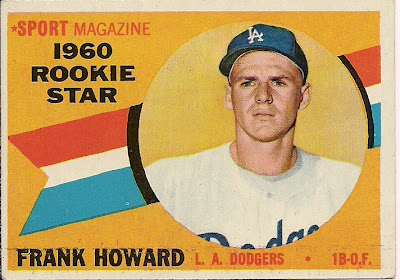 "Hondo" doesn't get enough notice for the looming shadow he cast over the game in the 1960s. He was one of the single most intimidating hitters in the history of baseball, a 6-foot-8 beast that probably would have been even more successful if he didn't play in a pitcher's park for the first half of his career. The Dodgers haven't had a lot of players like that, especially in the '60s. So his rookie card is here, thanks to one unique individual. The most recent addition to the countdown. This card arrived unexpectedly in the mail a couple of months ago. It's one of Snider's best cards, and the last card issued during his career (save for the inset of the '63 Topps card) in which he's wielding a bat. Every card of Snider should show him wielding a bat. 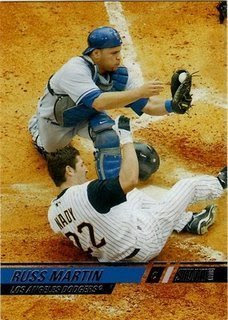 2008 was the year of Russell Martin, at least according to cards. He appeared on three of the greatest cards to be issued that year. Depending on your tastes, any of the three could be consider the best card of 2008. I'm sure some would rate this card higher, but his Yankiness is getting in the way. By the way, if you're tuning in late, we determined that Nady was safe on this play. 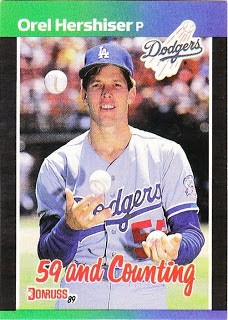 Baseball milestones and achievements don't get recognized enough in baseball cards. I miss the days of eight record-breaker cards starting off a set. Now, records are often diminished on some sort of checklist or flat-out ignored. Moment-in-time cards are the best. And if you can get a photo of the record-breaker juggling baseballs in the process? Well, your card has just made the countdown. 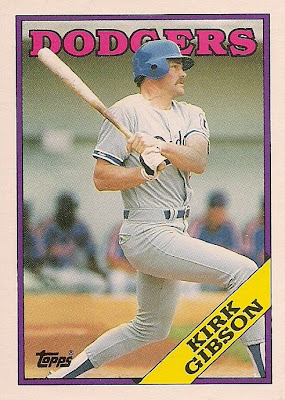 Never has the collective screw-up of a group of baseball owners benefited a team like the Dodgers benefited in 1988. The Tigers tried to trade Gibson to the Dodgers during the winter meetings in 1987. That didn't work out. But a month later, owners were punished for their collusion ways during the previous offseason signing periods and a bunch of players were made free agents. One of them was Gibson, who was signed by the Dodgers. A year later, the Dodgers were World Series champions, thanks in part to their MVP and an epic home run.

This is Gibson's first Dodger card. I really like it. 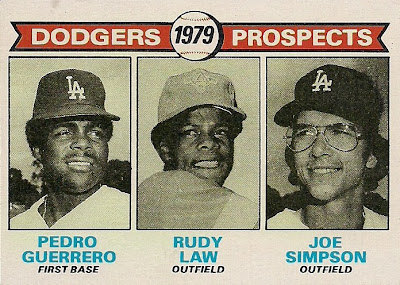 Pay no attention to the grainy, black-and-white photos. Pay attention to the subjects. Guerrero was probably the greatest player to play for the Dodgers in the '80s. Law was briefly brilliant before flaming out. Simpson didn't make his mark much as a player but is known across North America for his broadcasting. It's not often you get a prospects card with three guys that most baseball fans know. 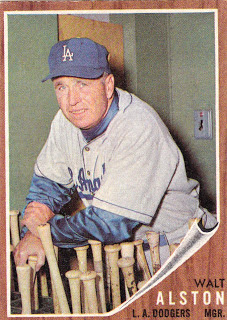 There are manager cards, and then there are NOW THAT'S A MANAGER card. Alston is obviously in control here. He'll let you have a bat if you ask nicely. But he'll tell you which one to use. I also love the very '60s background. The whole world featured an olive-green backdrop back then. One of my most favorite manager cards.

All of those cards make me happy.

I'm off to determine whether the ones I bought make me happy, too.

Maybe I'll even let you know what happens.

Nick said…
The '60 Topps Frank Howard rookie was one of the first big "pickups" of my collecting lifetime. I'm still in awe of that one.

Can't say enough about that '61 "Duke" either. Just an awesome card, all-around.

Hackenbush said…
Not a Garvey fan but I do love the Walt and the Orel and the Big Frank not to mention the awesome Duke (red, white and blue with a splash of yellow).
November 9, 2012 at 9:25 PM

carlsonjok said…
If that 78 Garvey is everything he was about, does that mean there are women who are not his wife hiding in those trees in the background.

Commishbob said…
When you've posted these groupings of ten cards I've been trying to decide which one I'd take if I could only own one. This is a really hard group to settle on. I'd probably go with the Snider because how could you not love this card? Classy card of a class guy. But it was really hard not to take the Hondo rookie. That '60 rookie subset really takes me back to my earliest card collecting days. I think that subset was the first one I 'chased'. I loved them.
November 10, 2012 at 2:32 AM

Sascards67 said…
In Atlanta the Guerrero RC is definitely known as the Joe Simpson RC. Plus, Guerrero used to kill the Braves so I tried to ignore that side of the card.
November 10, 2012 at 9:19 AM

runfore!kelloggs baseball cards said…
That Alston card is one of my favorites, manager or not.
November 10, 2012 at 12:22 PM

I know he's with RedSox but you're the one to know if that's something 'wrong' with the card.

AdamE said…
So I am a little bit late in commenting…

60. The 95 Stadium Club Nomo looks like a mannequin throwing a ball. That overhead shot from the last 100 best beats it all to pieces.

59. I didn’t know why they called Kemp Bison so I looked it up on Wikipedia just now. Now that I know why I think it is a stupid nickname.

58. I didn’t pay any attention to baseball until 1986 so I don’t remember Garvey as a player. For that reason this card is just a picture of a guy in a batting stance. Meh. (You can expect something Garveyish in your mailbox soon)

56. How come nobody sends me a vintage card of an all time great out of the blue? Must have something to do with being able to write really good and posting more than every couple months…

55. 2008 Stadium Club is way under rated. There are so many great photos in it. Too bad the screwed up all the numbers/ parallels and made it expensive.

54. I don’t know how I never saw this card. I thought I had seen every single 89 Donruss card there was. Orel always looks so young in his early cards. He was 30 in 1989 but his card makes him look 16.

53. My house wasn’t a baseball house. We didn’t watch lots of baseball games as a kid. I did however see Gibson’s walk off. I’ll never know why it was on my tv because my dad hates baseball but it was.

52. What I notice is the horribly shaped hats. Guerrero’s looks extra tall and Law’s looks extra wide. Simpson looks like he may be swallowed by his.

51. A manager standing next to the bat rack does make for a pretty good card. Did anyone else notice those two bats with no knob on the ends? Wonder how many of those ended up in the stands?