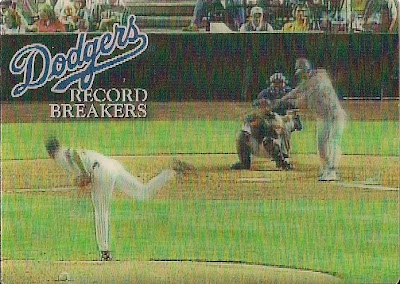 I believe this is the last of the "I Don't Know What This Is" Cards that I've received in the mail over the last few weeks. I am sure there's another one that will be arriving any day now at the rate I have been accumulating them.

This card came from Adam at ARPSmith's Sports Obsession, and I think he throws cards like this at me because as a Giants fan he enjoys tormenting Dodgers fans.

Here is what I know about this card:


But I do know that these cards are best scanned horizontally. The image above is a horizontal scan.

This is what you get with a vertical scan: 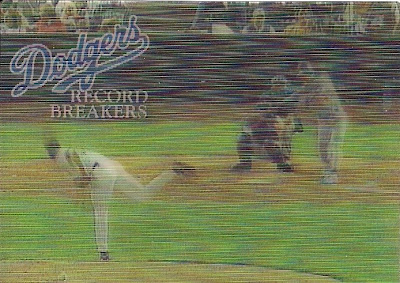 I think that wall behind home plate will put you into a deep sleep.

The card uses the lenticular technology that was used with Sportflics cards, and Sportflics are the same way -- they scan better if placed on the scanning bed vertically. (Your scanner may vary).

But that's all I know.

The card doesn't appear to be listed in my great big Sports Americana book of baseball cards. And that's as far as my knowledge goes these days. I don't have time to stare at the internet for hours.

So, like all cards of this nature, it will be grouped with my 1998 Dodgers but placed in the back with any other random, generic, indefinable, sometimes infuriating, Dodger cards.

Night Card Binder candidate: Raul Mondesi, 1998 Dodgers Record Breakers, some sort of stadium-issue set, no number
Does it make the binder?: It needs a number to make the binder, so, no.

arpsmith said…
I found that card in a dime box at a card store I frequent occasionally. I thought of you instantly hoping you hadn't seen it before.
November 26, 2012 at 8:28 AM

AdamE said…
I have some of these in my long forgotten Marino collection. They came in a case that looks and opens like a CD case only it is smaller. The football ones had like a 10-15 player checklist, were each sold individually, and they were issued for two years (that I know of).
November 26, 2012 at 10:54 AM