One great thing about baseball ... 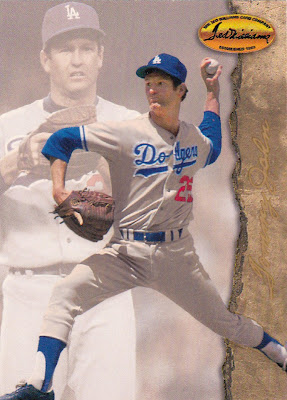 Baseball has a lot of sayings, some clever, some tired and some endearing.

A phrase that I hear a lot, especially from former baseball players who are now broadcasters, is something along these lines:

"One great thing about baseball is that you always see something you've never seen before."

This saying has always struck me as rather parochial, meaning it's a narrow way of looking at things. Many players and fans love the game so much that it's all they see. But anyone could possibly cite a million different activities, pursuits, etc., in which something happens in that particular activity that had never happened before.

Baseball isn't special in that area. Sure, if you're comparing baseball to tic-tac-toe, then, yeah, baseball can produce a lot more scenarios. But I've viewed or participated in enough events that didn't have anything to do with baseball where I've said or thought, "well, that's never happened before."

One of those activities happens to be collecting baseball cards.

One great thing about collecting baseball cards is that you always see something you've never seen before.

See? That saying applies to a variety of pursuits.

I'm always finding things in collecting that I never knew about or I've never seen. I'm not the most knowledgeable collector, but I didn't just start collecting three months ago either. So every new discovery is a surprise. 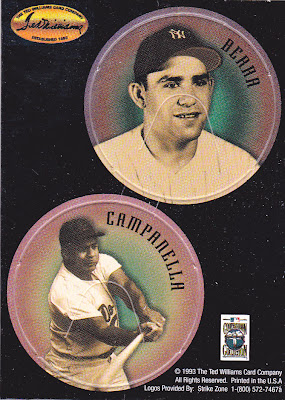 The Ted Williams Card Company put out pogs in the early 1990s. Did you know that? I never did until these arrived in my mailbox.

Pogs arrived way after my time. It was a big craze in the early '90s, but I was about 15 years past kiddy stuff by then. Because of that, there is no chance that I will punch these out and spin them around, or whatever the heck you do with pogs. 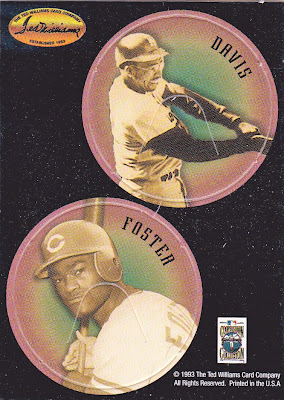 These are from an insert set from 1993. The backs of the cards are blank, so need to show them here.

These pogs, as well as the Tommy John Ted Williams card at the top of the post, arrived from Jim. I've got to send him an email because he also asked for my want list of '75 minis (my email is on the fritz today, so let's hope I remember).

When they showed up in the mailbox it was my "you learn something new every day" moment.

That's one great thing about collecting.

I thought it might be fun to learn what other new things collectors have come across recently. What was the most recent "new" thing you discovered in your collecting journey? It could be a new set, or a card you never new existed, or a new variation, or anything.

What was your most recent "Oh, wow, I never knew/saw THAT before" moment?

Maybe you even said, "One great thing about collecting is that you always see something you've never seen before."

I guess it depends on where you're coming from.

dayf said…
Hmmm... it's hard to surprise me, but the last EGADS moment I can remember having was at a vintage show last year when I saw a T3 Cabinet of a boxing subject that had the design of the 2007 Topps Turkey Red set. The beige one, not the gray one. Up until that moment I thought Topps just pulled that design out of their butt like they did with 2005 Cracker Jack. Then later I checked my old non-baseball price guide from the 80's looking up some football stuff and saw that exact design in the boxing section. So I had known about the design for 20 years but just forgot about it and cynically assumed that Topps was pulling a fast one.

Also: Pogs. you stack the cardboard circles (pogs) face up, then take a heavy plastic or metal disk and slam the pogs as hard as you can to try to flip over the pogs. The ones you flip over, you keep. It started out with tops from school milk cartons, then when the game caught on, toy manufacturers began making them, then they became collectible, then they became a fad and then it died. Horribly. I have a stack of NHL Pogs somewhere from when I worked at a novelty kiosk stand in the mall in college. The owner stiffed me on a paycheck one week so packs of Hockey pogs mysteriously started following me home until we were even (ie. the box was empty).
October 18, 2011 at 9:23 PM

By the way, I am a big-time vintage guy who was able to identify 1950s Topps sets by the time I was 12. I still find stuff that I never knew existed. When you get to the point where you convince yourself that you're an "expert," you've essentially told yourself that you have no intention of learning anything new...which is why I always position myself as a "specialist." It's a semantic distinction, I realize, but a distinction nonetheless.
October 18, 2011 at 10:49 PM