Another card I won't need at the card show

October 14, 2011
There are three kinds of cards that I ignore at card shows:

1. Cards I already have
2. Cards I don't care about
3. Cards that I know going in are too expensive for me to buy

I'm sure there was a point early in my collecting life when No. 3 wasn't on the list. Because of that, I went through a series of crushing disappointments as dealer after dealer witnessed my heart break right in front of them on the showroom floor. It was messy, it was awkward, it was pathetic.

Finally, I got wise and put No. 3 on the list. Budgets and realistic expectations have helped me avoid a drug-dependent life ... so far.

However, even though there are a mess of cards out of my price range that I don't consider buying for a second, that doesn't mean that I don't look at them at shows. It's nice to get really close to them just in case an airplane full of money accidentally drops one of its cash bundles through the roof of the card show building and it lands right next to me. I'll be instantly prepared.

In fact, there are certain coveted high-price cards that I've viewed repeatedly, both at shows and online and in various publications.

There is one of those often-viewed cards, which is crucial to my collection, that I have never owned and always wanted.

But this weekend, if I see that card at the show, instead of emitting long, mournful moans of wanting (what, you don't do the same?), I will say this:

Because here it is: 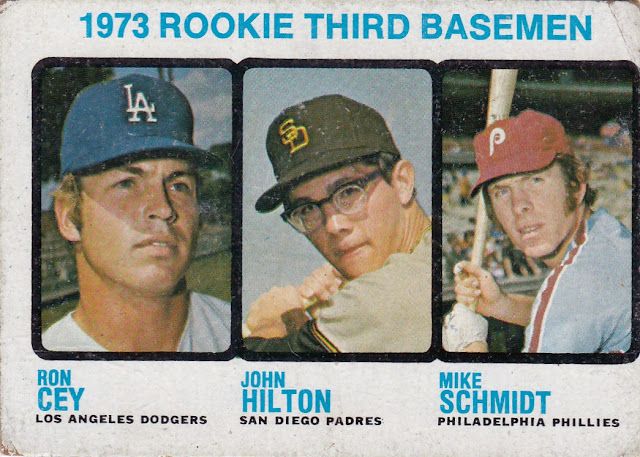 I really love it when I receive a package from Max.

This, of course, is Ron Cey's second-year card. A lot of collectors claim it to be Mike Schmidt's rookie card, and a handful of unfortunate Padre fans call it John (Dave) Hilton's rookie card.

But we all know that it is REALLY intended to be Cey's second-year card. Cey was expected to be a solid player for the Dodgers all along. But in 1973, most of what was said about Schmidt was, "for chrissakes is the kid ever going to stop striking out?"

Sure, Schmidt ended up having a Hall of Fame career, and he also managed to play all that time without me having any problems at all with him.

Except that he appeared on a card with my favorite player of all-time, thereby preventing me from obtaining my favorite player's card unless I wanted to shell out piles of cash. He was holding a card important to my collection hostage.

But that's where Max comes in. He said he was sending me a card that he thought would work in my collection more than his. I didn't know what it was, even though he has mentioned previously that he had card #615 of the 1973 Topps set.

And now, after 30 years of collecting cards, I have the card.

Maybe what I like best about this card is it's off-center on the right, almost making Schmidt less of the focus of the card. Because the photo of Cey is cropped more closely than the other two, it really looks like it's supposed to be Cey's card.

What a great hobby.

capewood said…
This card was my holy grail for a long time as well. I'd see it on eBay but it was always more than I wanted to spend. I finally found one on eBay that was a bit beat up but reasonably priced. Mine is in a bit better shape than yours. Of course, I was after Schmidt.
October 14, 2011 at 10:39 PM

jacobmrley said…
i told you those garvey cards would get no love whatsoever.

i figured i could get a minute fraction of its value on ebay or make your day. i see it is mission accomplished. i am very glad this card has found a good and proper home. enjoy, greg.
October 15, 2011 at 2:35 AM

night owl said…
The Garveys may get no love, but I'm almost positive I'll get one hell of a post out of that traded set. That's a treasure trove of material there.
October 15, 2011 at 2:47 AM

steelehere said…
One of these days you should write a "Best of the 70's article" with Ron Cey's Dodger cards (I'd even vote to have it go through 1983) just to see which card readers like best of the Penguin's as well as share your thoughts on each one.
October 15, 2011 at 1:42 PM

dfwbuck2 said…
cool card. i'd been watching those for months while putting together a schmidt collection for my brother. finally got one at a decent price in ok condition. he was pretty excited about it too.
October 17, 2011 at 8:54 PM