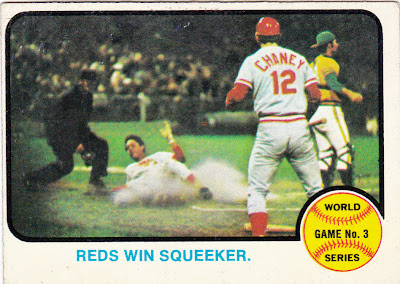 As someone who loves vintage cards, loves night cards, loves action photos on cards, and loves "moment-in-time" cards, this piece of cardboard is untouchable.

It features a photo of Tony Perez sliding home with the only run of the game, in the seventh inning of Game 3 of the 1972 World Series. The Reds won 1-0 on Cesar Geronimo's base hit that scored Perez from second base. Oakland catcher Gene Tenace is waiting for a throw and Darrel Chaney is ready to greet Perez. And if you care, the home plate umpire is Mel Steiner.

The back of this card rules, too. 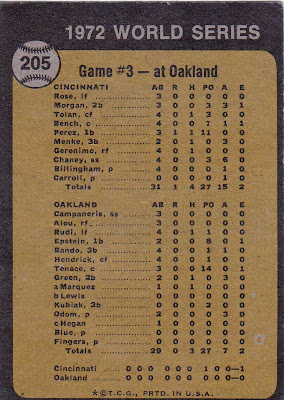 Not exactly a FULL boxscore, but it's close enough. You'll never know what the "a" "b" and "c" next to some of the Oakland players means looking at this boxscore, because the notation at the bottom was cut off (Marquez was a pinch-hitter, Lewis a pinch-runner and Hegan a pinch-hitter).

I enjoy almost everything that this card has to offer, but there is one thing that keeps me from enjoying it fully. For me, it is like a needle on a record stopping a song short.

The offensive item is on the front of the card. In sad blue letters:

There is no such word as "squeeker."

It should be "squeaker."

That is so embarrassing. I speak from experience. I've written headlines with spelling errors in them (what editor hasn't?). The vast majority are caught before they make print, but there have been a few that have hit the porch the next morning.

This is why I'm so particular about what is written on my blog. I'll read it over to make sure there's nothing misspelled. I'm not as fanatical about it as I am at my job -- which is why some stuff gets through here -- but I hate it when I find a missing word or spelling issue in a previous post.

I can just imagine someone reading this, spotting an error and saying, "look at the editor. He screwed up a simple word."

But we're all human. Even the people in charge of writing copy for Topps.

I mean, here it is 38 years later and some dude is still bringing up the spelling error on a 1973 baseball card.

Can you imagine the terror felt by the person who wrote that when he/she realized it was an error and now traveling to stores all over the world?

I've discussed this a little before. But I'm going to do it again, because Matthew from Number 5 Type Collection sent me a nice stack of '73 cards, including the awesome night card I'm showing here.

Exactly what makes this set wacky and wonderful? I think you know. But I still have to babble about it anyway. Besides, what else are you going to do on Columbus Day?

Matthew Glidden said…
Cool, glad to contribute a night card! Hadn't noticed the SQUEEKER before, either. Whoops.
October 9, 2011 at 11:54 PM

Play at the Plate said…
That's a cool patp that I'll need to acquire. I just featured a patp from Game 2 of the same World Series. I'm always thankful that you editors don't point out all the typos and grammatical mistakes on my posts. I usually see them after it gets posted and then I hope no one reads it! I correct them if I remember to go back and do it.
October 10, 2011 at 1:17 AM

EggRocket said…
Interesting ... I never noticed this before. Or if I did I promptly forgot about it.

To me, 1973 Topps is off floating in its own little world. It's great. It's horrible. It's classic. It's forgetable.

Overall it's worth chasing. Mostly because Topps tried to do some things with photography that they never tried before (or at least not to that extent.)

Chris Stufflestreet said…
For the record, I also cringe whenever I see that as I look through the '73 binder. It will eventually come up in my blog on that set.
October 10, 2011 at 8:47 AM