Trades to get your mind off football 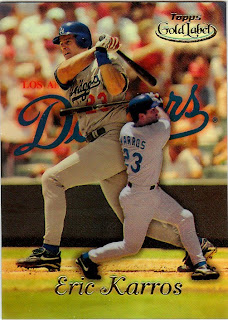 I know why you've come here. You're here because you can't stomach the season-opening NFL telecast anymore. You need a break. Tell me, how many commercials have you seen so far? It's in the hundreds isn't it? And how many times has a broadcaster or "expert" said "The National Football League" instead of "NFL"?

I am not watching tonight's game. I plan to watch some NFL on Sunday, but after that we'll see. I know that while baseball is still on, football will be nothing more than a responsibility -- got to know what's going on because of the job. The telling point will be in November, after baseball is done. Will I return to following the NFL, or will it be like the last couple of years when it was mere background noise on a Sunday?

So, instead of football yammerings, I offer you some cards to, at least momentarily, keep your mind off the most hyped sport on the planet. Enjoy some Dodger cards, obtained from Drew of Drew's Cards and John of Old School Breaks, two guys who are Yankees fans, but somehow still have very cool collections. I promise I won't yell anything. If you want that, turn the TV back on. 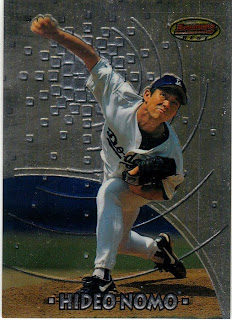 I'm starting with the cards Drew sent. And what better way to start if off than with a Hideo Nomo card? I'm beginning to get borderline fixated with collecting Nomo cards. And that is a very, very, very, very slick, slippery slope to badville. Because I suspect there might be more Nomo cards than cards of any other player ever. Even Mickey Mantle. 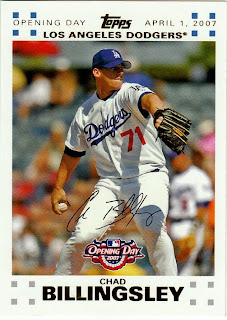 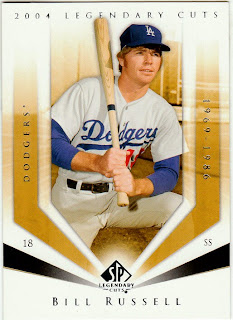 Bill Russell doesn't seem the type for a Legendary Cuts card. He's not the Bill Russell I think of when mentioning the word "legend." 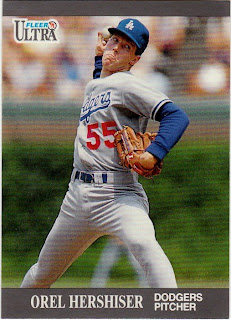 The last Dodger I needed to complete the 1991 Fleer Ultra team set. Yay! 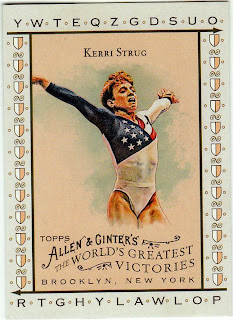 More set completion stuff. Hop-a-long Kerri is one of the last World's Greatest Victories cards that I need from 2008 Allen & Ginter. Still looking for David & Goliath and Gettysburg. 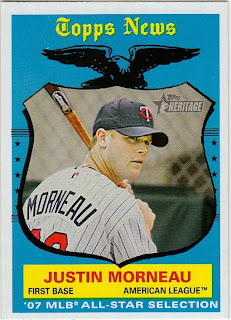 Heh. A 2008 Topps Heritage short-print. I should probably get serious about finishing up this 2008 Heritage set and just track down all the short-prints and put the thing out of its misery. But something is preventing me from doing that. Hmmmm, what could that be? Oh, that's right. Money. So, I'll stick to the one card every month technique. 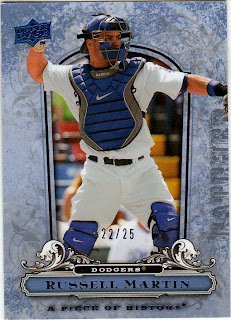 Again. No idea they were serial-numbering Piece of History base cards. But I try really hard not to pay attention to this set. 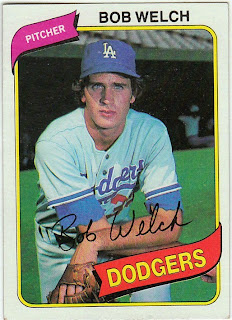 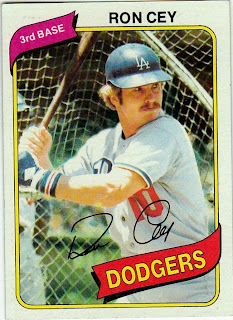 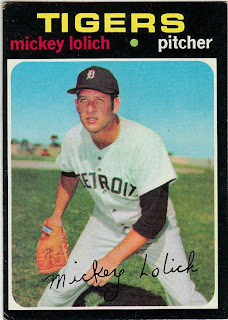 This is very cool. A 1971 Topps card need from Drew! Sweet, man! I promised I wouldn't yell anything, so I'm remaining calm. This is tremendous. Thanks again, Drew. 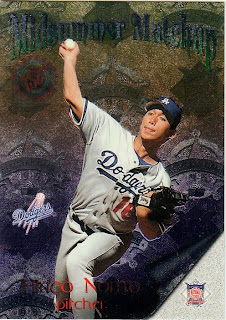 Onto the cards from John, and I'll start it off with another Nomo card. This is one of those cards where they have one player on the front and one on the back (Randy Johnson's on the back). My brain doesn't like these cards. I try to convince it that it's a Nomo card and my brain keeps telling me: "psssst, Randy's on the back." Yeah, I know, brain. Shut up. 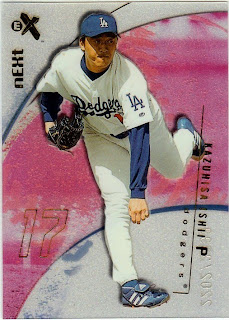 Oooh, I like this card a lot. I have a couple of these 2002 Fleer EX things. They're snazzy. Even the pink is cool, and the card has a great feel and it's serial-numbered, and all that good stuff. 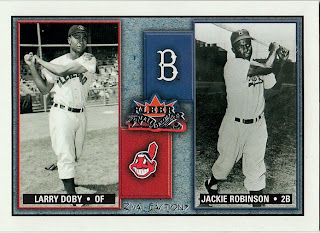 You can't go wrong with a card that features both Jackie Robinson and Larry Doby. The "Rival Factions" title is bizarre, especially since I don't believe Doby ever faced Robinson in a game that meant anything. 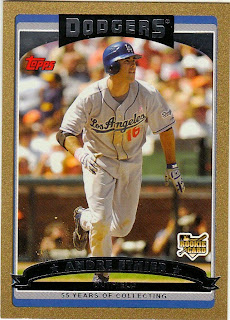 A gold parallel of the guy who has more walk-off hits than any other major leaguer this year. I expect to hear Yankees fans talk in the offseason about how it'd be a good idea for the Yankees to acquire Andre Ethier for next season, just like they talked about Matt Kemp last year. Like the people who run every other team are absolute dolts. And people wonder why the Yankees and their fans drive me wacky. 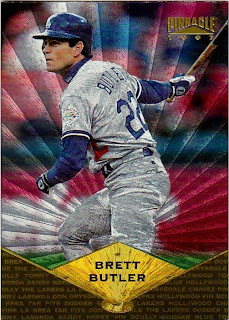 Pinnacle doing shiny like Pinnacle liked to do. I don't know what this effect is called. Someone who was collecting at the time probably knows. 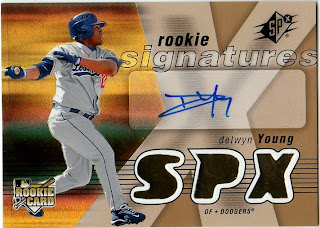 Now this is a super shiny, super awesome card. One of these days I'm going to feature all the cards that I showed to my daughter that got a "Cool!" out of her. This will be one of them. 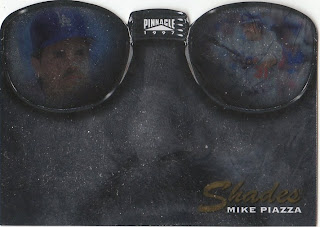 I'm just showing this for the freak show factor. Do I really want to look at Piazza's nose hairs? Because that's all I see. 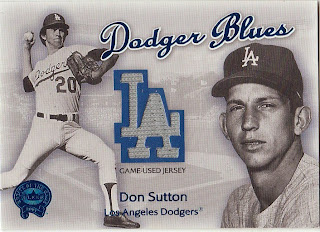 Final card. And this wipes the nose-hair thing out of my mind. I oohed and aahed over this card when I saw it on Old School Breaks several months ago. And John sent it to me! Woo-hoo! Thanks John!
OK, that was three exclamation points in a row. So I think I've got you all ready for the rest of the football game! More hype! Go hype! Go commercials! Go 98 TV timeouts a game! Go Oilers ... er, Titans! LET'S PLAY SOME FOOTBALL!

SpastikMooss said…
Aw man, didn't realize that was the only Orel you needed. That was the only fleer ultra I had for a while..totally would've sent that with the smoltzie. Alas, glad you have it now.

And I actually am here because I want to watch the game but my girlfriend won't let me. We're watching HGTV.

her logic: you don't care about the teams
my logic: you've been watching house hunters for 2 hours and I just finished all my homework.

madding said…
I'm pretty sure I sent you a serial numbered Opening Day Loney card awhile back. I remember picking it up at a show in a penny box.
September 10, 2009 at 9:57 PM

BASEBALL DAD said…
I'm just thankful for the MLB channel! That's what I'll be watching after October. Love the Doby / Robinson card. Anyone else got one to trade ?
September 10, 2009 at 10:04 PM

Offy said…
Dufex! It is still my absolute favorite thing done to a card. Dufex cards just popped. I'm disappointed that Upper Deck has used the process in some of their hockey sets, but none of their other sports.

My daughter enjoys refractors. Whenever I show her one she asks if she can hold it and tilt it back and forth to see the rainbow.
September 10, 2009 at 10:41 PM

Matt Runyon said…
Whew! The Steelers squeaked that one out! Now back to baseball for 10 days. Looks like the Rockies are going to make things interesting in the NL West. The Giants are doing a fade. :(
September 11, 2009 at 9:00 AM