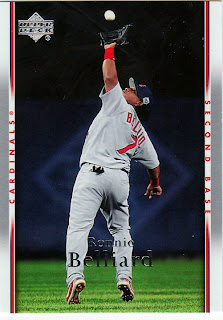 In all the buzz this week over the Dodgers acquiring Jim Thome and Jon Garland (how about that pitching performance last night, D-Back fans?), perhaps not enough has been said about one of the Dodgers' other recent acquisitions, Ronnie Belliard.

I haven't paid much attention to Belliard's career, so it was a little bit of a surprise to see that he was a successful regular with both the Brewers and Indians. I thought he was nothing more than a sometimes-starter guy, but he's put up 169 hits in a season before, hit 48 doubles in 2004 and was once the Brewers' minor league player of the year. Got to pay more attention to those Midwest teams, I guess.

Belliard came into focus much more during the 2006 postseason, when he played for another Midwest team, the Cardinals. He's a pretty solid hitter and can play a lot of positions, which is why the Dodgers dealt for him.

So there is more to Belliard than the stupid corn rows (does he still have those?) and being a member of the baggy uniform patrol (some Nationals fans have called him fat). Here are a few more things about the guy up on that awesome night card:

-- He was born in The Bronx.
-- He was drafted by the Milwaukee Brewers.
-- He is a distant cousin of former Braves shortstop Rafael Belliard, which is a relief because I'm sure I've called him "Rafael" more than once.
-- He hit .462 in the 2006 NLDS against the Padres.
-- He was the victim of an extortion attempt in which a man, whose daughter had a relationship with Belliard, was convicted of trying to extort money from Belliard in exchange for keeping quiet about the daughter's alleged pregnancy. I remember reading about this and thinking, "eesh, I'm glad Belliard isn't on my team." Oops.
-- He made one of the most amazing plays I've ever seen from a second baseman.

The Dodgers have quite the collection of players on their team now. I can't even get into all the different personalities there are without turning this into an epic post. But somehow it's working. Right now.

The Notorious B.U.D. said…
That play is outta sight! How did I miss that on Web Gems? Belliard has had a sneakily effective career, I remember he just cracked 100 career HRs last season. I think one of his GMs or coaches once called him "rolly polly", but there are certainly worse 2B in the game today.
September 5, 2009 at 1:15 AM