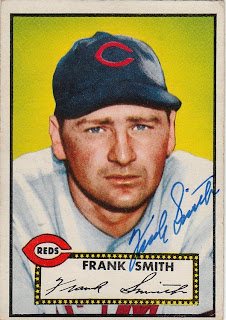 Four years ago today, former major league pitcher Frank Smith died. It doesn't seem that long ago. It seems like just last summer when I was talking to him on the phone and he was inviting me down to take a dip in his pool, even though we lived about a thousand miles apart.

But that's the kind of person Frank Smith was. I only knew him for the tail end of his life, but he seemed to be friendly to everyone he met. Frank pitched for the Reds and Cardinals in the 1950s. He was one of the top relievers of his time. And he sure seemed to enjoy his trip to the major leagues.

His friends included Vic Raschi and Ken Boyer. His best friend in baseball was probably Andy Seminick, a Reds teammate who also played for the Phillies. But even though Frank hung out with the best in baseball, he was also a fan. He collected autographs from Ted Williams and Mickey Mantle. The den of his home was lined with memorabilia. He told stories about Stan Musial. He said his biggest thrill in baseball came during his first year in the majors in 1950 during a barnstorming tour.

He was at a high school in Ohio with Jim Konstanty, the famed Whiz Kid reliever from the Phillies, Hall of Fame broadcaster Mel Allen, and a few others, including an elderly man that Frank didn't recognize. The man sat next to Frank. He had white hair and wore a gray vest. "He handed a ball to me," Frank said. "I went to grab it and I couldn't get it from him. He said, 'Not bad for an old man.'"

Frank looked at the man again and instantly recognized him. It was Cy Young.

Frank kept a broken bat of Jackie Robinson's in his closet. He also told me about an encounter with Robinson during a game.

"I went 2-2 on him and I knocked him down. Nobody gets knocked down on that (count). He didn't say anything. He brushed himself off. The next pitch, he bunted. I figured something was up. I went to field it and he ran right over me. Left his cleat marks on my shoulder. We just looked at each other. Didn't say anything. We knew that's the way the game was played."

Frank also ran a baseball camp for years, traveling around the south for one-day clinics. He was known for his affection for kids and was always handing out prizes and treats to them.

Frank was 6-foot-3, which was big for his time. He was a sidearm pitcher and people called him "Fireball." He was intimidating. "The sidearm was a great pitch to right-handed batters," Frank said. "Willie Mays was that way. Right now, if you mention my name, he'd say, 'That mean son of ...' I used to have to brush him back."

The man was full of stories. My initial conversation with him must have lasted two hours. The crazy thing is, I contacted him because I heard that there was this former major league player from our area and I couldn't believe that our newspaper hadn't done a story on him or even mentioned him since his playing days.

To get ahold of him, I called up another one of Frank's good friends, Norm, who still lived in town. I visited Norm's house. He had a bunch of Frank Smith memorabilia out for me. Newspaper clippings, glossy photos, buttons, baseball cards, autographs. Norm asked me if I collected. I said I once collected cards, but not anymore.

Norm would visit Frank every March during spring training. They would attend spring training games together. But Frank would lose interest after about five innings. "He says there's nothing more boring than watching a ball game for nine innings," Norm said.

Frank, who grew up on a farm, never made more than $12,500 a year during his playing career. But he enjoyed his career immensely. He and his teammates knew people in every town. Frank knew an artist in New York who was a baseball fan. During Frank's visits to New York, the artist would have a car waiting for Frank after a game. Frank would attend parties on the artist's sailboat. All of Frank's teammates were jealous.

But his career was cut short when he developed shoulder pain during his one season with the Cardinals in 1955. Smith had pitched as many as seven games in a row during the peak of his career and his sidearm delivery had worn on him. He tried to keep the pain quiet. "But I needed both hands to comb my hair," he said. Reacquired by the Reds after the Cardinals waived him, Frank quit pro ball in 1957 rather than go back to the minors.

Frank realized that baseball had changed vastly since the time he was in uniform, but didn't appear to hold modern players' fame and fortune against them. He would attend autograph sessions with younger retired players and current players and watch them barely look up as they signed autographs. Frank, meanwhile, chatted and rubbed kids' heads. But Frank would shrug off the difference. "It's just a business," he'd say.

When Frank was 21, he went back to the locker room during spring training to change his shoes. Three veteran players walked into the locker room but didn't see Frank. They began ripping the young players, then left.

"I said I hope I never do that when I get older, and if I do, I hope somebody shoots me," Frank said.

I wrote up a large story on Frank and included most of these moments -- and many others. Frank enjoyed the article. He kept inviting me down to Florida where he lived. But I couldn't go. Norm loved the story, too, and he kept me up to date via email on the latest on Frank.

Less than a year after the article, Norm told me that Frank had leukemia. It was bad. His survival rate was 26 percent. Frank said: "I asked my doctor, 'how many of your patients die?' He said, 'about half of them' and I said 'well, your batting average ain't that bad.'"

After about seven months of hospitals, Frank actually made it through. They had a big party. Soccer, softball, swimming, horseshoes, golf. When Norm gave me the news, I could tell he had a big smile on his face when I talked to him on the phone. Frank said, "I don't know how long I'll last, whether it's one year or 10 years. Doesn't matter. I'm here now, with shorts on."

Norm emailed me the news. I dutifully wrote up the obituary on Frank. I mentioned all of his exploits. Norm emailed his thanks, said he thought the story was great. Soon after that, the next day or two, Norm called me up. He said he wanted to stop by the office. I met him outside the building.

Norm had some items in his hands. They were four signed baseball cards of Frank. I had seen them during my first visit to Norm's house. Norm said he wanted me to have them. I stammered out an 'I can't,' but Norm insisted, and I felt obligated. It was strange, because in the newspaper business you are not supposed to accept any gifts. But this felt almost necessary, like it was required and I was doing something wrong by not accepting them. 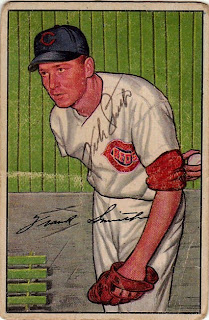 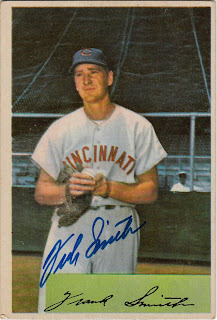 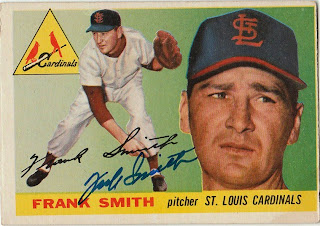 1952 Bowman, 1954 Bowman and 1955 Topps. All signed by Frank. These cards are probably in the top 10 of the most meaningful cards in my life.
I was just barely starting to get back into card collecting at this time, chasing the 1975 Topps set of my youth. But these Frank Smith cards were a huge emotional boost in getting me to fully return to collecting.
About three years later, I was at a card show standing at a dealer's table. The dealer was a local man who knew I lived in the area, too. He pointed out some cards of Frank Smith that he had. They were signed by Frank. "You know he is from here," he said.
I said, "Yeah, I know." I didn't buy the cards. Had them already.

Tony said…
Nice story. These older players are collector's best friends. Even though they might not have been as famous as Mantle or Mays, they did play with/against those guys. They have wonderful stories to tell, and most times they are happy to be remembered by the fans. Older stars are wonderful to get to know, I have written to a few myself, and many have said "happy to receive your letter, please write again". These are people that should be treasured and respected for what they contributed to the game.
I would take a single Frank Smith autograph over a dozen Derek Jeter's anytime.
September 24, 2009 at 10:45 AM

Carl Crawford Cards said…
Man, what an awesome post. And I'm with Tony. Older players really appreciate the fans and what they mean to the fans. They don't get enough respect or credit.
September 24, 2009 at 11:30 AM

anybody think in 50 years that someone will be sharing these types of stories about the athletes of today?
September 24, 2009 at 11:35 AM

Hackenbush said…
Great post. One of the things to love about baseball is all the little stories of relationships between fathers and sons, fans and players and the players themselves . There has always been an intimacy in baseball that doesn't exist in other sports. Thanks for letting us know a little bit about Frank.
September 24, 2009 at 12:22 PM

Orioles Magic said…
Awesome post, older players really seem to have the right idea about how to go about dealings with fans as opposed to today's players
September 24, 2009 at 12:57 PM

Tony said…
One of my favorite ex-player responses was from Joe DiGangi. He wasn't a player, but was the Yankees bullpen catcher with those great Yankee teams with Dimaggio, Gehrig, Ruth etc. And until Bill Werber recently passed, the only surviving member of the 1933 Yankees. He was friends with all the greats, and was in the bullpen warming up Red Ruffing while Gehrig was giving his famous speech. he sent me at least a half dozen additional autographs, plus my 2 photos. A wonderful gentleman to write to. Living history, and a national treasure as is all veteran players.
September 24, 2009 at 7:55 PM

Play at the Plate said…
Wonderful post...I think my favorite one yet. Like Canuck, I wonder whether today's athletes will be looked upon with this fondness in the future. Hopefully there will be enough that respect the game and the fans and appreciate being remembered that stories like this will be written. Thanks for sharing a little slice of Mr. Smith's life with us.
September 25, 2009 at 1:36 AM

Anonymous said…
This is a great article. Thank you for sharing this with us. It's great to know there are still good athletes out there that are good people, too. Frank may not be with us anymore, but it gives us hope that more stories like his are waiting to be discovered.
September 25, 2009 at 10:10 AM