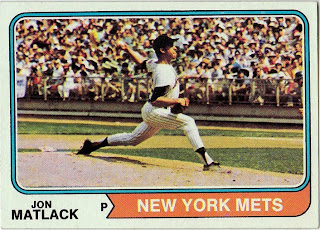 I've mentioned before how much I like horizontal cards and that I wish someone would issue an all-horizontal set someday -- something like 1960 Topps, but with all action shots.

I'm not sure why I find horizontal cards so pleasing. It might be because the cards are much like the effect you receive from a wide-screen TV or computer. The image just seems bigger, more life-like, more panoramic. Another reason is because during my peak collecting period, from 1975-1990, Topps didn't issue horizontal player cards. It wasn't until Upper Deck arrived and started putting out horizontal player cards that Topps came back with them in 1991.

I thought I'd show some of my favorite horizontal cards, in no particular order, although I did save my favorite for last. Also, I'm breaking this post up into two parts. Since horizontal cards are so commonplace now, it's too difficult to search for my favorites from 1992 to the present. So, this part will be the old-school, gray cardboard, horizontal card post. And someday, when I can't figure out what to write, I'll show my favorite new-school, whatever-the-hell-they're-printing-cards-on-these-days, horizontal cards.

You've seen a lot of these cards before, because they're classics. So, I'm showing them nice and big, just like a wide-screen TV, so you get a better look at them. Pretend they're in HD. 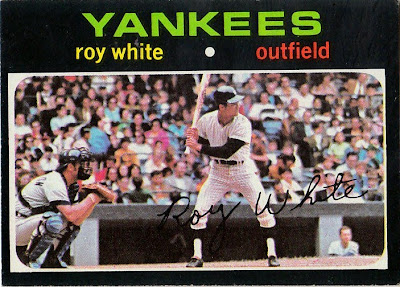 1971 Topps Roy White. This might be the first horizontal card I ever saw. White is my favorite Yankee of all-time, a player I liked so much as a kid that I wish he never played for a team that I dislike so much. Here you see White's pigeon-toed stance that announcers always discussed when he came to bat. In case you care, the catcher is Duane Josephson of the White Sox. 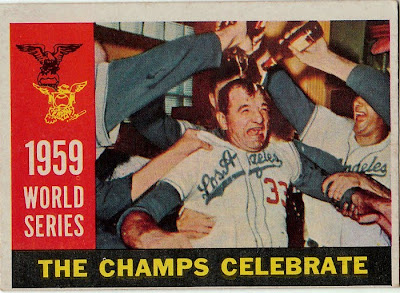 1960 Topps, The Champs Celebrate. This card doesn't exactly give off the whole "wide-screen wow factor." But it's too cool of a card to ignore. Besides, the Dodgers just won the World Series, man. 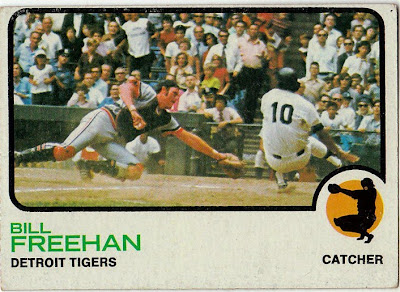 1973 Topps Bill Freehan. There are a lot of horizontal shots in '73 Topps, but I think they suffer because of the amount of space that is given to the design (1971 has this problem, too -- but the design is so much better). But the thing I like about this card is not the sliding Yankee -- Celerino Sanchez -- or Bill Freehan. It's the crowd. I could spend a good 10 minutes studying the crowd. Look at the guys in the ties, the two security guard/policemen in rapt attention, and the '60s style shades. And I wish I could read what is written on that guy's shirt. 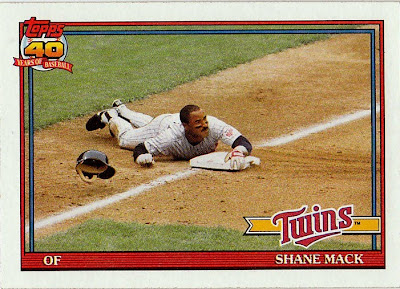 1991 Topps Shane Mack. Great shot. He looks like Leonardo DiCaprio in "Titanic" clinging to the oak panel in a desperate bid to stay afloat. 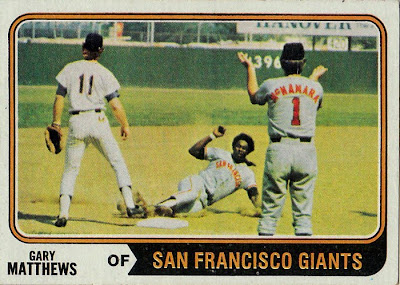 1974 Topps Gary Matthews. That's a mighty fine shot by 1974 standards. We sure loved this card as kids. The field almost looks like a minor league park. 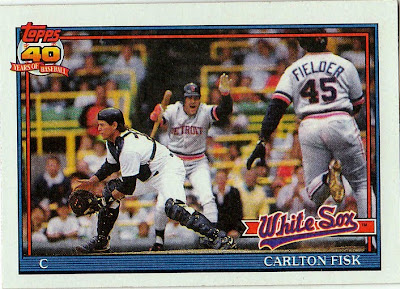 1991 Topps Carlton Fisk. A former Cardboard Appreciation subject. I repeat myself too much, so if you want to read it again, go here. 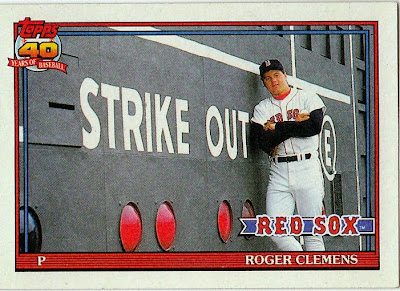 1991 Topps Roger Clemens. I suppose this was Topps' answer to the fun, portrait style cards that the other card companies were producing at the time. It's a damn good answer. One of the iconic cards of the early 1990s. 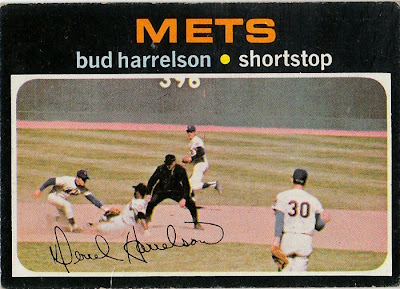 1971 Topps Bud Harrelson. Another famous card, because of Nolan Ryan's "out" call in the photo. If the player -- a Houston Astro -- is actually out, I'm hoping it's Joe Morgan. I'm too lazy to look it up. 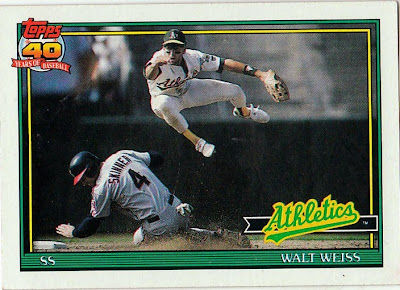 1991 Topps Walt Weiss. Would collectors enjoy 1991 Topps as much if this card wasn't in the set? No. 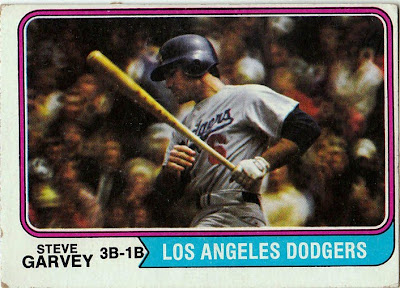 1974 Topps Steve Garvey. When I was a kid this was the "BEST CARD EVER." I wanted it for a long time -- the first time I saw it was on those 1975 Topps MVP cards during my first year of collecting. I think I bought it at a card show a few years later, and I've never upgraded it. It's got a faint crease in the lower left corner.
Now, when I look it, I realize it's not a great shot, and the ghostly fan images make it one of the "FREAKIEST CARDS EVER." But I didn't pay attention to that as a kid.
So, now do you see why I want an all-horizontal set to collect? Love those cards.
Stay tuned for Part 2 ... someday ... when I feel like it.
(I'm aware that "horizontal bop" is slang for, um, you know. But we're not talking about that now. There are kids in the room).

the fisk is one of my all time faves (http://garveyceyrusselllopes.blogspot.com/2008/10/theres-play-at-plate-and-its-perfection.html) and i used to carry that garvey around in my wallet.

i analyzed the bud harrelson card not too long ago - http://garveyceyrusselllopes.blogspot.com/2009/07/lurker-nolan-ryan-makes-call.html - and figured it's either morgan or the toy cannon, and they were both safe.
September 10, 2009 at 8:08 AM

shoeboxlegends said…
Awesome post, horizontal cards are the best!
September 10, 2009 at 8:21 AM

Andy said…
The reason why horizontal cards are so much better is that baseball is a horizontal game and, as you put it, you can see more action in one photo. Basketball, for example, is a vertical game. Players are very often jumping to shoot or block and the basket is high up off the ground. In baseball, other than very rare instances, such as an infielder leaping for a high line drive or an outfielder jumping above the fence to catch a fly ball, there are few instances of baseball plays going vertical. Conversely, your post shows a whole bunch of example of horizontal plays where either one player is extended horizontally while batting, pitching, or defending, or where 2 or more players are involved side-by-side.

Dean Family said…
On the Freehan card the ball appears to be in his bare hand while he makes the tag with his empty mitt.
September 10, 2009 at 9:16 AM

Jim said…
When I first pulled it out of a pack, the 1982 Topps Carlton Fisk In Action card absolutely floored me. That's still one of my favorite cards as it was one of the very few horizontal Topps cards from the era.
September 10, 2009 at 12:26 PM

jtanevismom06 said…
That Garvey card is the subject of a trade in the movie Mask. I think Rocky Dennis gets the Garvey and later attacks the tradee for being stoopid. Correct me if I'm wrong.
September 13, 2009 at 12:17 AM