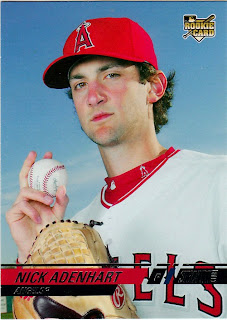 Because the news of Nick Adenhart's death last night in a car accident, apparently caused by a drunk driver running a red light (and let's not forget two other people died in this accident, too), compels me to write something, anything on the very off-chance that my blog is the only one someone reads today.

Write about how angry drunk drivers make you, how we have been talking about the evils of drinking and driving for decades, yet some shit-for-brains imbecile still hasn't gotten the memo that drinking and driving KILLS. Not only does it kill, but it ruins the lives forever of everyone involved in that accident. FOREVER.

"Nick, 21, was the youngest player in the American League when he was called up to make his Major League debut on May 1, 2008. Baseball America tabbed him the Angels No. 1 pitching prospect."

We'll never know what he could have done.

Rest in peace, Nick. My prayers and thoughts are with your family. And with you, and with the Angels.

Win a few for Nick this year.

LanceBurnitz said…
Of what I have read about him on SCN, he was a great guy. Always thought fans first, and signed everything until people were satisfied. He is in a better place now though. I have a question for you though, are there any good hobby shops up at State College? I am making my way up there on Friday and I want to pick up some packs.
April 9, 2009 at 2:29 PM

--David said…
I agree about posting something for Nick. I did a simple card for him, not even realizing until later that he had played for the Arkansas Travs...
April 10, 2009 at 3:39 PM