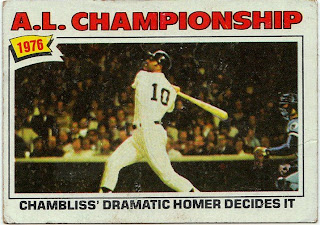 The broadcast of this game was replayed on YES this week after the Yankees' game was rained out. It's featured on the Yankees' propoganda TV network all the time. But I've never seen it from beginning to end, and it took place right before I started watching baseball as a kid. I should spend some time and watch the whole thing.

But this time I saw the game when I was at work, so I only had time to glance at the first inning. A co-worker and I were commenting on what we saw. Among the brilliant observations:

But the thing that stays with me about this game is the same thing that I see with any dramatic game of that era: the absolute chaos that breaks out when some hits a winning home run, like Chambliss, or when the final out is recorded in a championship-clinching game. Fans, athletes, team officials and police officers storm onto the field all at the same time in a crazy mob. It was mayhem, but it was also the norm then. At the end of the 1977 World Series, Reggie Jackson is elbowing fans to the ground in a frenzied desire to get back into the dugout.

In fact, many say Chambliss never touched the plate at the end of his home run in '76 and should have been called out because of it. Another nefarious plot to further the Yankees' cause had succeeded.

I remember the 1980 World Series when police came out on horseback to prevent Phillies fans from storming the field when their team clinched the title. That was the turning point in on-field celebrations. Now, when a team celebrates the Series, they do it all by themselves. It's almost surreal -- the players mobbing each other, while the people who have rooted for them all season long dance and jump in the stands separated from their heroes. But I guess that's the way it's got to be. Can you imagine the lawsuits there would be if they allowed that stuff from the '70s to go on today?

Chambliss' blast marked the return of Yankee dominance that had been dead since St. Louis beat New York in the World Series in 1964. And if there's one thing I'm against it's Yankee dominance. So I'm not sure why this card is here. It's not awesome at all. Chambliss isn't awesome. And he's not No. 10! The Penguin is No. 10! Chambliss stole Ron Cey's uniform number! These Yankees will stop at nothing! Call Chambliss out! Replay the game!

I understand Billy Martin, Thurman Munson, Al Cowens and a few others are no longer with us. John Mayberry isn't going to be hitting bombs and George Brett isn't going to be spraying the ball all over the place. Hal McRae may not be able to make it down to second in time to roll Willie Randolph out into left field.

But this game should absolutely be picked up from where it left off. If the Yanks can win, so be it....let their 4 game sweep at the hands of the Reds stand. But if the Royals shut the Yanks down in the rest of the 9th and win in extra innings, then lets get the Reds back out there, no matter how frayed Jack Billingham's rotator cuff is, and replay the World Series, too.

Unfortunately, this is the best chance the Royals have to hang another World Series banner in Royals Stadium in the next 3-5 years.
April 24, 2009 at 11:36 AM