Tribe fan for a night 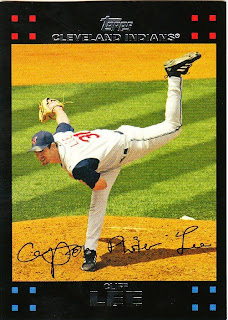 Sorry, Cliffy. This has nothing to do with hoping the Indians delay the Red Sox's quest for a postseason berth another day. It has everything to do with what I received in the mail Monday. For what before my wondering eyes did appear but a tidy white box direct from Indians Baseball Cards. Always.

Now, I know I'm a newbie in the card blogging world and all you veterans out there already know how generous David can be with his tournaments and trivia questions. But I was dumb-founded when I opened the box. All I did was answer one little trivia question correctly, and for my "effort" I received nearly 100 Dodgers cards. Amazing.

I am here to tell you, when the next Tribe Cards Tourney starts, get your butt over to Indians Baseball Cards. Always. You will NOT regret it. And it's great fun, too!

I have to share some of what I received (I can't possibly scan all of it). Those of you who aren't Dodgers fans may get a little bored. But stick around for the last card (I swear it was the second-to-last card out of the box). I nearly choked on my lunch when I saw it.

First out of the box: 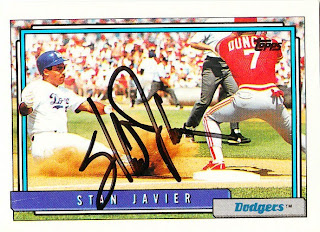 Stan Javier autograph. Any auto -- of a major leaguer, that is -- is a sweet auto. You'll notice that current Dodger first base coach Mariano Duncan is covering the bag. Very nice photo. Very nice card. 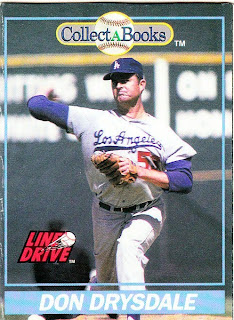 A lot of these cards I have never seen. Like I've mentioned before, I stopped collecting for about 10 years, and many of these cards are from that period (1994-2004). This is from Line Drive's series of Collect a Books. Photo on the front, cartoon on the back, stats and bio on pages 2 and 3. I actually learned a little bit about Drysdale that I did not know. 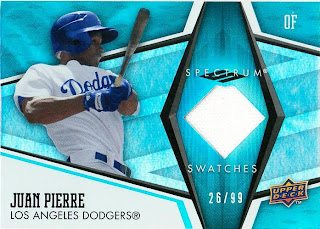 Upper Deck Spectrum 2008 swatch card. Nice! It's got the usual Richard P. McWilliam spiel about how it "is a piece of memorabilia that has been certified to us as having been used in an official Major League Baseball game." That really narrows it down, Richard. But I like it anyway. 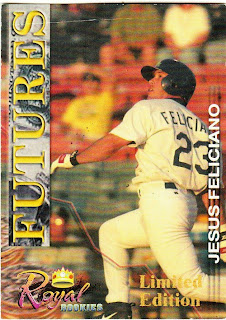 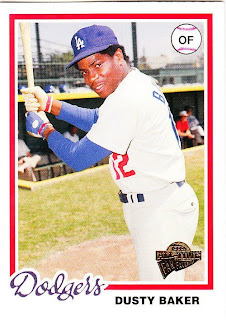 Fan favorite Dusty Baker! Couldn't get enough of the Fan Favorites when they were out. One of the first current sets I collected after coming back to the hobby. 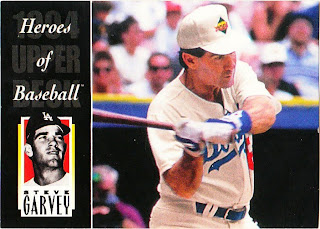 (My best Andy Rooney voice): Did you ever notice that anytime a major leaguer puts on a cap that is not a major league cap, he looks like your father playing ball? 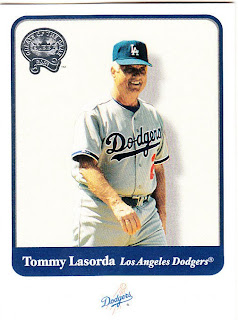 This Fleer Greats of the Game is the first card I've seen that managed to make Lasorda look svelte. 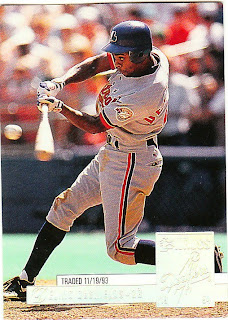 1994 Donruss special edition. Delino DeShields, on his way to the Dodgers to infuriate fans across Southern California. Nothing like having the date of L.A.'s most infamous trade stamped on a card forever. It's like having the date I threw up on the school playground plastered on my forehead. 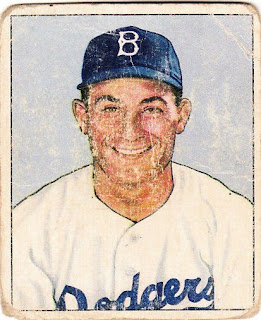 1950 Bowman Carl Furillo! Skoonj himself! I'm speechless! What a wonderful card! In all of its much-loved glory! Beautiful! And this is now the oldest card (by one year) that I own!

Thank you, David again. I should be a Tribe fan for a year for what you've sent me. But I like the Dodgers too much. Go check out Tribe Cards. Always. And enter his tournament! Go, go!

madding said…
Nice haul! My girlfriend and I got our cards from the tourney today, too. I am so backlogged on my blog posts that I won't be able to post about it for a bit now. But I will say I was absolutely floored when I saw a '51 Bowman card. Mr. Tribecards is a nice guy, indeed.

Sorry about the Cards losing tonight (er, last night), by the way. I already got yelled at by another Dodger-loving friend of mine.
September 23, 2008 at 6:39 AM

--David said…
This was a very entertaining (sometimes laugh-out-loud) write up on your prizes! Great stuff! I'm glad you enjoyed the cards!! Welcome back to the hobby. :-)
September 23, 2008 at 9:28 AM