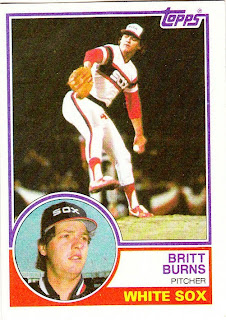 This is the first in what should be a regular series featuring cards of players photographed at night. Like I mentioned in an earlier post, I collect cards like this because they are totally awesome, or whatever the kids are saying these days (I've watched "Fast Times ..." a few times. Sue me).

Part of the trick to "night cards" is first figuring out whether they were actually photographed at night. For example, a number of photos on cards taken during games at Yankee Stadium, especially in the '70s, look like night shots, but they're not. The darkness of the stands there seems to give the illusion of a night game.

Once that's established, I like to figure out the date of the game in the photo, especially if it's a card that doesn't feature a postseason game. It's usually simple to pinpoint the date of playoff games.

This one was a little tricky, and until I stumbled upon one key fact, I was about to put out a plea to White Sox Cards to help me figure it out. But I think I've got it. Here is the scenario:

This 1983 Topps photo is from a game Britt Burns pitched in 1982 (I know it's '82 because that was the first year the White Sox wore their red, white and blue unis with the block SOX thingy stripped across the chest). There is flag bunting in the background but it's not an All-Star Game because Burns didn't pitch in an All-Star Game (he was selected in 1981 but didn't play -- thank you baseball-reference). The White Sox weren't in the postseason in '82, so the flag bunting means it was Chicago's home opener (Burns is wearing a home jersey).

Burns pitched his first home game that year against Baltimore. It was a doubleheader. Burns pitched the first game. It must've been a twi-nighter because retrosheet says both games were at night. At first, I didn't think that could be the home opener because why would the White Sox schedule a doubleheader as the home opener? But then I remembered, the start of the 1982 season was plagued by a series of April snowstorms that called off games in the East and Midwest. So it makes sense that Chicago's home opener was a doubleheader. Add the fact that the White Sox didn't play a game the previous day before the doubleheader and that previous day was a Friday, and it makes even MORE sense (snow-out?). And if you look at Chicago's schedule, sure enough, the team played five straight games on the road to open the season before coming home to Comiskey on April 17, the date Burns pitched.

Phew! That's a long way to go to come up with this: the photo was taken on April 17, 1982, a 3-1 victory by the White Sox over the Orioles in Comiskey Park. Burns was the winner, pitching seven innings and allowing three hits, Dennis Martinez was the loser, Greg Luzinski hit a two-run home run, and it was Mrs. Peacock in the study with the candlestick!

madding said…
That's pretty awesome. I don't think I've ever attempted to deconstruct a baseball card to determine what the date of the photo was, other than noticing certain things like World Series or All-Star patches and figuring out that they must have been taken at such events.
September 20, 2008 at 6:34 AM