September 14, 2008
I am a child of the 1970s. As a kid, I dined on space food sticks, collected Wacky Packages, played Rock 'Em Sock 'Em Robots, and sang along to The Electric Company.

My love for baseball and baseball cards also began in the '70s. The first cards I ever saw were from the 1974 Topps set. My mother bought them for me and my brother while on a trip to the store. We enjoyed the cards, but when the summer ended, we thought the cards ended, too, and we THREW THEM AWAY. Fortunately, we weren't such dumb asses the following year. We collected the cards from the 1975 Topps set and held on to them (I have those frayed, scuffed and creased pieces of cardboard to this day). Like all collectors, I have great affection for the set that started it all, and as an added bonus, the 1975 set is considered classic by many (some still don't like it).

My favorite team was the Dodgers from the beginning, and I'm still a faithful Dodger fan. My favorite player as a kid was "The Penguin," Ron Cey, a great player and still a Dodger favorite in Los Angeles. I wanted his 1975 card so much that I traded ... wait for it ... the 1975 Hank Aaron card to get it. 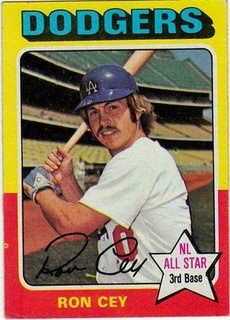 Even then, I knew I got the worst of that trade, but as many say, a card is only worth what someone will pay for it, and my payment was the Home Run King.

I collected for 10 fantastic years, from 1975-85, then went off to college and collected only sporadically. During the card boom of the late 1980s/early 1990s, I collected like crazy and accumulated a ton of crap. And boy was it crap. I made it my mission to try to collect the entire 1989 Topps set by purchasing all my cards from a single drug store in Buffalo. I came up 4 cards short.

By 1994 or so, I'd had it with cards. I didn't like the way they looked. I was never a big Upper Deck fan, and the company's influence was everywhere. I basically stopped collecting except for picking up a stray pack here or there at the start of the baseball season.

But that 1975 set got me hooked again. A couple of people at work started discussing cards, and we traded a little bit. I was turned on to a card dealer who operated in what's basically a pawn shop. Starting in 2004, through trips to that dealer's store, card show visits and trades, I managed to acquire the entire 1975 set, and it's in a lot better shape than those cards I threw around my bedroom as a kid.

I was back. I ended up collecting the 1974 set -- the year of the cards I threw away -- and then became interested in the current base sets, basically because Topps was inserting "vintage" cards into its 2006 rack packs. The inserted cards weren't from the 1970s -- mostly '80s stuff. But I collected in the '80s, too. Just for the heck of blowing my money, I tried doing what I couldn't do in 1989, collect the whole 2006 set simply by buying packs from stores. I'm sure I wasted a bunch of cash, but I did get the whole set.

I've collected ever since. I'm still collecting 1970s stuff and a few older things, and I like the current Topps Heritage and Allen and Ginter, like many collectors. But I have to say, the other stuff that's driving the hobby -- triple cut signatures, patch cards where the patch is twice the size of the photo of the player -- doesn't do it for me. Autographs are cool, but it's not why I collect. I hate the idea of cutting up photos and cards to glue some signatures together. Give me a photo that tells a story any day.

So that raises the question: What can I offer in a card blog if I'm not up on the latest hobby goings-on? Well, I've found out over the last two months that there are plenty of great blogs that do a far better job on breaking hobby news and providing spot-on-commentary than I ever could. If you have never checked out Wax Heaven or Sports Cards Uncensored or Voice of the Collector or Stale Gum, then by all means, get off of my blog and check out there's. They know what they're talking about. I read those card blogs and many others. And that's the point. I love blogs like Dinged Corners and the Baseball Card Blog and Cardboard Junkie even if they're not knocking Beckett on its ear every week. There's room out here for everyone, I hope.

Basically, I'll be offering my perspective on why I love baseball and cards. As a veteran small-city sports journalist and editor, I hope I have a few posts of interest.

But this post is too long already. I'll add some more about what I love about baseball and our hobby in the next day or two.

James B. Anama said…
Welcome to the Hobby Blogosphere. You have now been added to the Sports Card Blogroll

Gellman said…
Welcome to the Blogdome. Nice colors to choose on your layout, I am almost blinded at 7 in the morning!