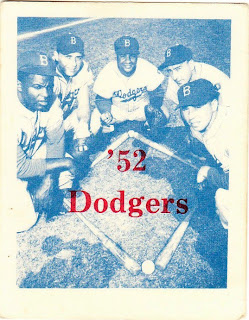 You thought I was going to post about blue refractors didn't you? Sorry, we're going in an entirely different direction.
The Dodgers clinching a postseason berth tonight got me thinking about why I like the team. And while a lot of that can be explained by card collecting and the fact that the Dodgers were one of the top teams around when I was a child, there's more to it than that.
My appreciation for the Dodgers comes down to history -- Brooklyn Dodgers history, and more specifically, the Boys of Summer. Roger Kahn's book, "The Boys of Summer," based on the 1952 Brooklyn team, stayed with me more than any other book I read during college. And I read a lot of books in college. Kahn's book was like "Ball Four" and "The Bronx Zoo," in that it finally depicted players as people and not mythic legends. And while that idea may seem to contradict the practice of collecting pictures of players on little squares of cardboard, I don't think it does. I collected baseball cards BECAUSE they depict people with all of their imperfections. Let others collect cards of furry creatures or magical wizards.
Anyway, the stories of the 1950s Dodgers and the Brooklyn community solidfied my fondness for the Dodgers forever. And long before I read the book, I acquired this set from TCMA, the '52 Dodgers.
TCMA is the card company that produced many, many sets through the 1970s and 1980s. The company is named after founders Tom Collier and Michael Aronstein. It's probably most famous for the sets of '50s and '60s players that it put out in the early 1980s. But it produced minor league sets, too, and specialized sets of certain major league teams.
I ordered this set, one of the earliest ones TCMA put out, through a collectors' magazine when I was in my early teens. It's 40 cards of everyone on the Dodgers' roster in 1952. If you had five at-bats, you got a card. There are even cards for the coaches. 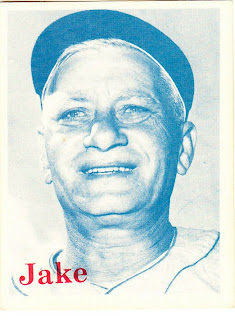 The cards, which were produced in 1974, are as basic as you can get. I like the blue tint, though. The sizes of the cards are not uniform. Some are standard 2 1/2-by-3 1/2, and some you can't even fit in a regular nine-pocket sheet because they're so wide. 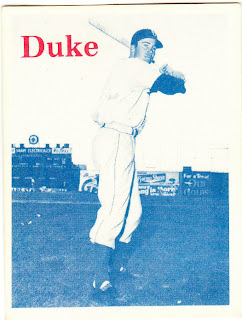 The cards feature the players' first names on the front, and in many cases, nicknames. There is Preacher and Campy and Pee Wee and Skoonj 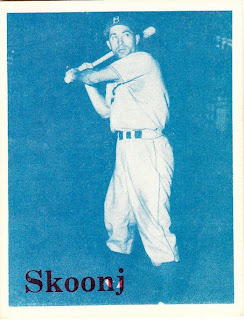 Until I picked up a 2008 Allen & Ginter mini last month, this was one of only two Robinson cards that I had. 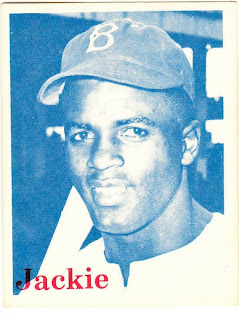 The set is kind of beat up now, but I like it because it reminds me of why I am a Dodger fan. 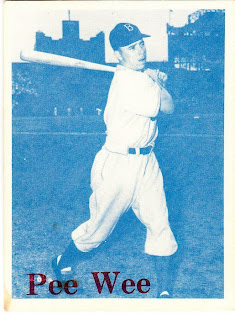 And I like it for the wonderful, crude backs. Nothing but red ink and a typewriter, and someone who can't spell "shortstop." 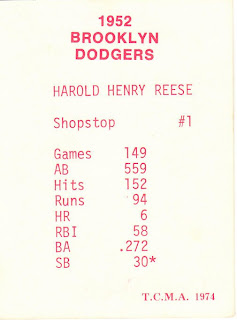 Kahn's book is now more than 35 years old. But it's still one of the most touching, heart-breaking, thought-provoking books I've ever read. If you have never read it, you should. It's still relevant today. And who knows, maybe it'll get you to root for the Dodgers in the playoffs this year. 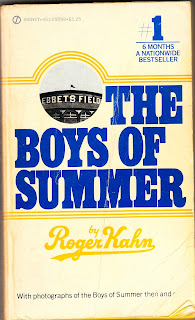 dayf said…
Wow, awesome cards. I love those old TCMA cards. They have a real DIY feel to them that makes you want to go print up your own set of cards.
September 26, 2008 at 11:54 PM