Knowing when to stop

September 13, 2008
This is not the first blog to call card collecting an addiction. That it is. That. It. Is.

But sometimes you have to be slapped in the face with a few dud packs, as I was tonight upon ripping into my third Allen and Ginter blaster box in three days. Call it a box-a-day habit. One purchased Wednesday, one Thursday and one Friday.

I bought the last one despite already blowing my weekly allowance -- the cash left over after feeding the Suburban Monster (bills, groceries, gas, dog). But I needed to get one of the last two boxes at Target, because the closest Wal-Mart to my home --apparently operating under the assumption that only kids buy cards -- removed the card display to put up back-to-school stock (enough frivolity, kids! How can you have any pudding if you don't eat your meat?)

The Wedneday and Thursday boxes were semi-productive, fueling my habit. The third box tonight was deflating. With eight ripped packs still on the floor, this is my booty, (excluding the mass quantities of duplicates): 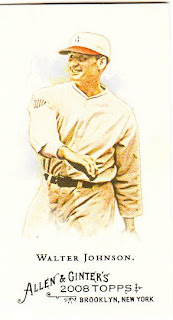 And a Tom Glavine jersey card: 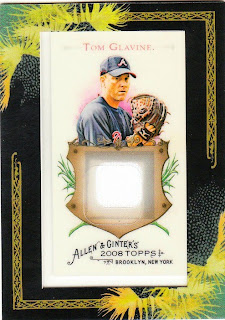 The Glavine card admittedly is cool. But for $20, I received only a handful of cards that I needed. Not my idea of getting value for your money.

So what have I learned tonight? Yep, I should've bought a blaster of Goudey.