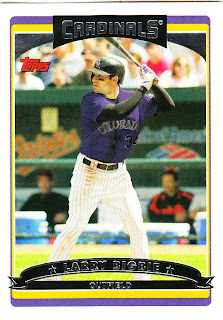 We're all familiar with Topps' methods of dealing with cards of players who were traded during the offseason. Back in the '50s, the pictures were paintings and they would simply repaint the cap on the picture. During the '60s, they would get a shot of the player without his cap and crop the photo tight so you couldn't see the player's old uniform. During the '70s, Topps constantly featured players staring up into the sky, as if they had just spotted a spaceship (is that what I think it is?), so their cap logo wouldn't show. And of course, there was airbrushing. Topps airbrushed the caps on seemingly half of the 1969 set after baseball expanded by four teams.

During the '70s and '80s, Topps attempted to draw the new team logo onto the players' caps with some spectacularly horrid results. I often wondered if Topps employees hung those card photos on their refrigerator doors at home because the logos looked like children drew them. (Check out the 1974 Jim Perry or the 1987 Mike Laga someday).

Nowadays, photoshopping has replaced airbrushing and it's a little more difficult to tell anything was done to alter the card. A little. And that's not to say Topps still isn't lazy or careless.

Exhibit A is the 2006 Topps Larry Bigbie. It's the first card of a player that I've ever come across that says he plays for THREE different teams. Bigbie started out the 2005 season playing for Baltimore and you can tell that they took the photo while he was with the Orioles. He's in Camden Yards, judging by the giant "Orioles" logo and the apparent Orioles team members in the dugout.

But Bigbie was traded to the Rockies in a deadline deal in July of 2005. So, Topps photoshopped him into a Rockies uniform and used the Rockies color scheme on the border.

THEN, Bigbie was traded to the Cardinals in December. Topps' solution was to stamp the Cardinals silver foil name onto the front of the card, but not change the border. And you'll notice on the back of the card that they put the Cardinals logo on the left-hand side, noted that he was traded from the Rockies in the upper right-hand corner, and colored the name masthead Cardinal red. 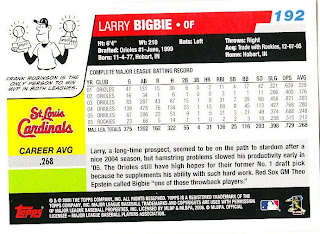 What they failed to do in their rush job was change the text at the bottom. It says in part "The Orioles still have high hopes for their former No. 1 draft pick because he supplements (supplements? Is that some sort of Mitchell Report crack?) his ability with such hard work." Well, that's mighty big of the Orioles to have such high hopes for someone playing for St. Louis.

This card basically says that Bigbie plays for the Orioles, Rockies and Cardinals. This was no gimmick because no correction was made as far as I know. Bigbie didn't appear in the update set either.

We all know the irritating stuff that Topps pulls. But this is just stupid. I don't know about you, but it annoys the hell out of the editor in me. It's just shoddy work.

madding said…
I never noticed that about the Bigbie card before (the Orioles in the dugout). Bigbie apparently was sent to the Cardinals as a snitch to try and get dirt on other Cardinals members, but he was hurt most of the season and only appeared in a few games. I guess that's why he wasn't deemed worth of an Update card.
September 24, 2008 at 4:22 PM

night owl said…
The Orioles DID play the Rockies during the 2005 season at Camden Yards, but it was in June, BEFORE Bigbie was traded to the Rockies, so he's definitely photoshopped into a Rockies uniform.
September 24, 2008 at 7:42 PM

Play at the Plate said…
This is what happens when you pay attention to the packs you bust instead of just rippng looking for the hits. Nice work by you, shoddy work by Topps.
July 13, 2009 at 4:46 AM