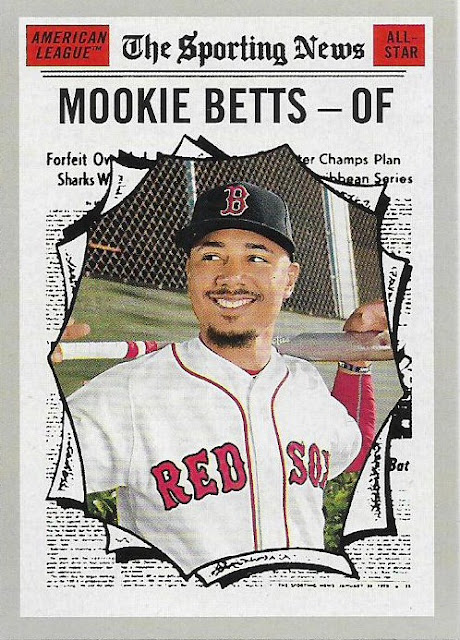 Somewhere during the 1980 baseball season, I became aware of a player named "Mookie."

What a terrific name. You just didn't come across unusual first names like you do these days (every day at my workplace, it's like: "OK, so that's how we're spelling 'Jasmine' now?").

Mookie was called up to the Mets in September of 1980 and, wow, was it different viewing someone named "Mookie" on my television. 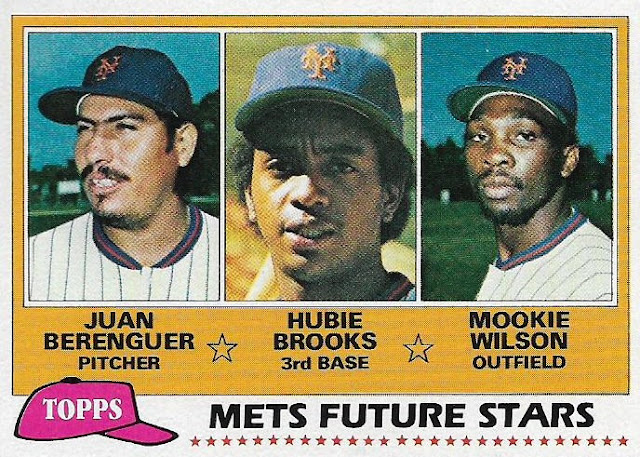 This card is practically iconic, thanks to the arrival of Mookie Wilson on cardboard.

But it still wasn't as fantastic as this card: 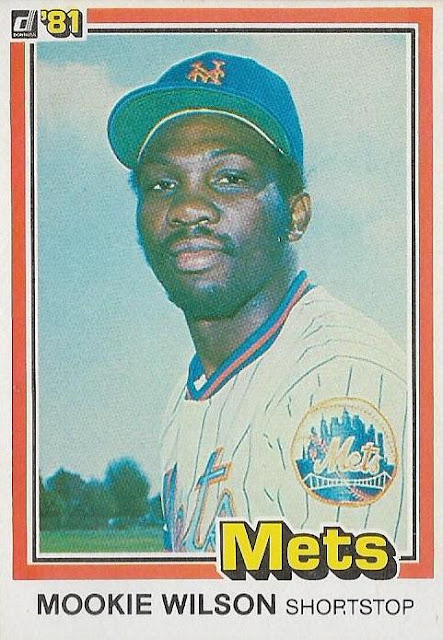 I pulled this card of this Mookie character in one of the first packs of 1981 Donruss I ever bought. I was entranced.

I mean, what decade was this?  Cards by something called "Donruss"? Players named "Mookie"? Man, the '80s are gonna be weird!

For years I hoped that somehow the Mets would trade Mookie Wilson to the Dodgers. I liked speedsters anyway and Mookie would liven up a team with a whole lot of Steves and Rons and Bills and Dons. (We did have a Dusty though!)

It never happened. And my Mookie dream died when his career ended in 1991. The Dodgers would never, ever have a player named Mookie.

The Dodgers DO have a player named Mookie on their team now. In crazy news that caused me to tear up half the planned cover of Wednesday's sports section last night and try again, the Dodgers obtained Mookie Betts and David Price from the Red Sox in a three-way deal that also involved the Twins. Then, separately, to clear some outfield space (and, no doubt some salary), they sent Joc Pederson to the Angels for Luis Rengifo and some prospects -- or at least they're working on that deal anyway.

The Dodgers have obtained some big blockbuster players over the past 10 years, from Manny Ramirez to Adrian Gonzalez to Yu Darvish to Manny Machado. Only Ramirez matches the excitement level I felt when I heard the news of Betts (bumping the Padres out of a potential deal makes me even more pleased).

I already can't wait to pull the first Mookie Betts Dodgers cards. But I will be waiting for the traditional card versions -- not Topps Now stuff.

As it is now, I have just 21 cards of Betts. I don't own his rookie card, mostly because I stopped buying 2014 Topps fairly quickly because I didn't like the way it looked.

Interestingly, 11 of the 21 cards are from last year, probably because Topps bombed us with Betts cards after he won the MVP award in 2018. 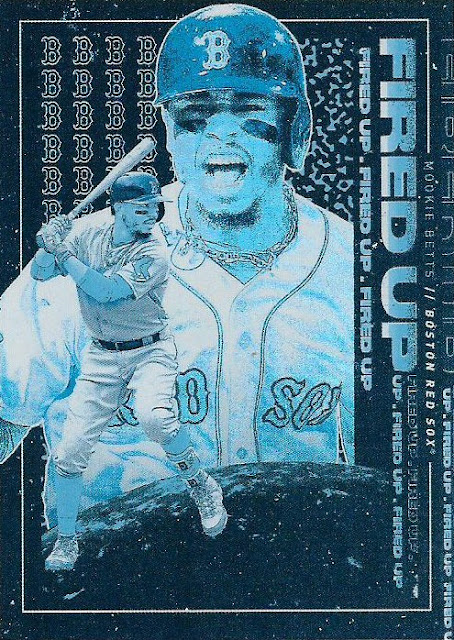 This one is my favorite. I usually give up Red Sox cards pretty readily in dealing with Red Sox collectors -- they did beat my team in the World Series, you know -- but I've hung on to this one. 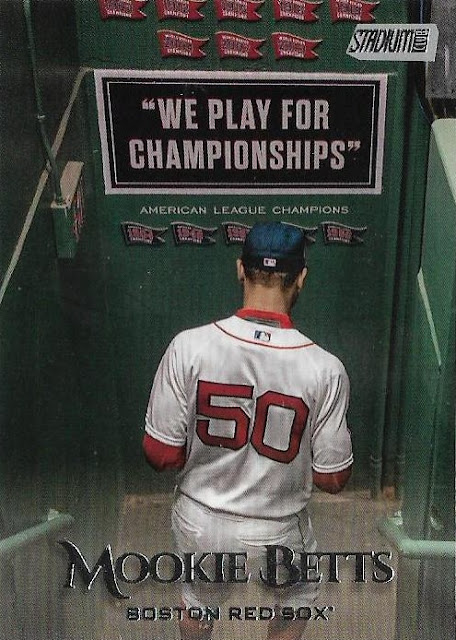 Of course, this one is the best piece of cardboard that Betts has ever appeared on thus far.

As for earlier cards, not much stands out in my collection. 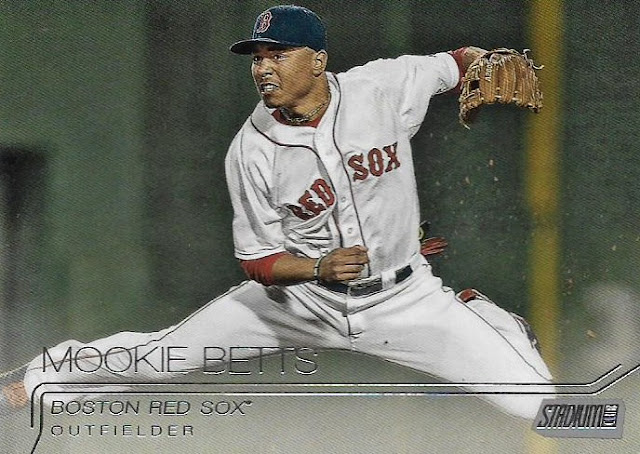 That's from 2015 Stadium Club, from before he started growing facial hair. 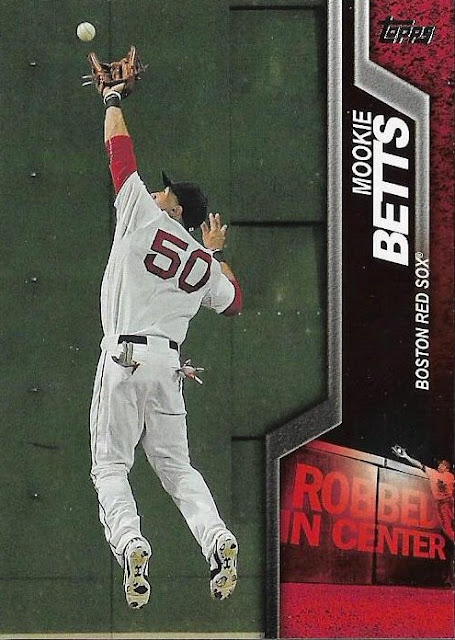 There he is robbing someone in center. 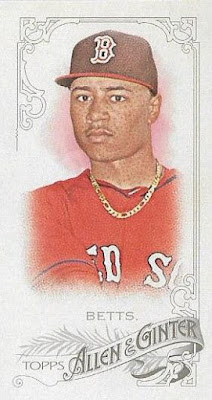 Mookie is in my Allen & Ginter frankenset. So is David Price, just one page over from Betts. 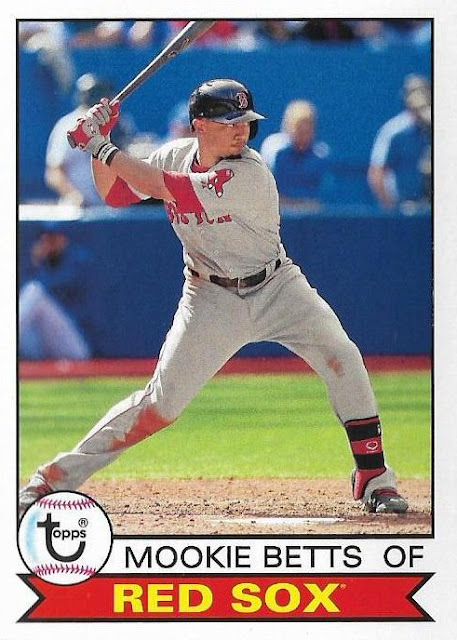 In 2016, Betts appeared on the 1979 design in Archives. I collected the whole '79 portion of the set because I enjoyed it so much.

I did the same thing with 2019 Archives, with the 1975 design portion of the set. Unfortunately, Betts wasn't in that part. 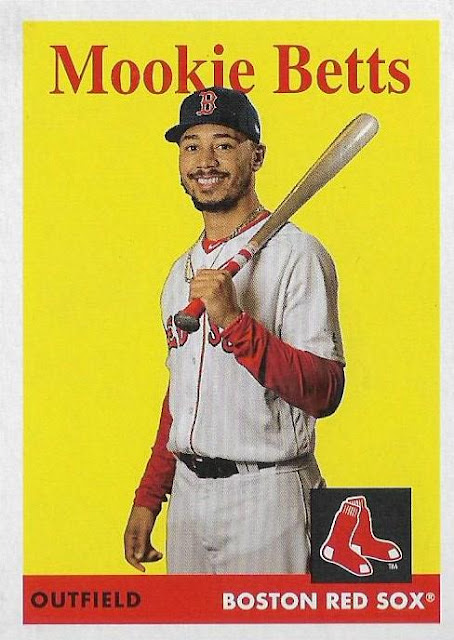 He appears in the 1958-themed section. Still a handsome card. It's nice to have Archives and Heritage so we can see players as we once saw them on cards, instead of the constant action of the last three decades.

My favorite part of this trade is how well the Dodgers front office maneuvered, protecting all of their top prospects from being dealt even though I'm sure teams inquired about many of them. But the Dodgers still hung on to Lux, May, Downs, Gonsolin, Smith, Ruiz, Gray, etc.

Yeah, the Dodgers dealt Pederson, Kenta Maeda and Alex Verdugo, all key parts of the Dodgers' postseason runs of the last two years. But all were expendable. Pederson and Maeda had their up-and-down moments and even with some notable World Series achievements for both, you need to consider that Betts is pretty much the best position player out there not named Mike Trout. I think the F.O. did well.

In the process of all the trade rumor talk, just about every Dodger not named Kershaw, Buehler or Bellinger was mentioned as potential trade fodder. One that got me a little nervous was the possibility that Corey Seager was on the move. That's because I just acquired my first Corey Seager autograph recently. 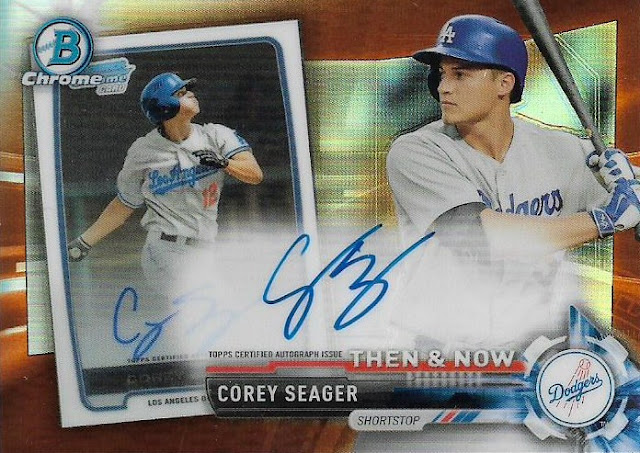 This came from Twitter friend Mark, and I was pretty happy to fill a hole in my collection of Dodger autographs (I would like to get one of each player, but that is a very casual, whenever I get to it, project).

Keeping Seager on the Dodgers adds to a potent lineup that may look something like this:

Of course, the Dodgers swap players out like crazy so I'm sure we'll see that configuration maybe once all season. But, still, it's a stacked lineup.

My hope is that Betts will help this along.

If not, well, at least I'll be able to shout "MOOOOOOOOOOOOOOOOOKIE" at my TV all season long.

I've wanted to do that since I was 15 years old.

Brett Alan said…
I wish that Betts had ended up in the rightful, historic home of baseball Mookies, but there are worse places for him to be. Happily I did pull his base rookie card (from a discount blaster a couple years after the fact, I believe) and I've bought up quite a few of his cards from dime boxes, including much of the all-Betts insert set from last year.
February 5, 2020 at 10:33 PM

GCA said…
Ah, that will make me like him much more now that he is out of the AL East.

Here's how much I stay on top of baseball news, even though football is done now. Your post is the first I've heard of this trade! I'll still be more into hockey until April.

I was going to say how silly it was that Bowman did a "Then & Now" on a player that was a rookie only a couple years ago, but then I looked it up and that Seager rookie auto is from back in 2012. Didn't seem like that long ago. Again, I'm the "anti-collector" in that rookies are pretty much the least of my cardboard concerns. (Anti-hype collector maybe).
February 5, 2020 at 10:34 PM

Lee Hero said…
Hell, I pulled the base of that Seager autograph out of a pack and upon first glance got all excited because I thought it was autographed, lol.

I'm pretty stoked about the possibilities with Mookie in the lineup. I'm gonna miss the guys we lost alot, especially Verdugo.
February 5, 2020 at 10:48 PM

BaseSetCalling said…
didja at least get excited later on when the Dodgers got their first Hubie?

(and is that triple Rookie Card in the Cardboard Appreciation series somewhere?)
February 5, 2020 at 11:19 PM

Matt said…
This one is going to hurt for awhile.

Doc Samson said…
Congrats on your squad obtaining Mookie, Mr. Owl. I remember a time when these blockbuster trades were so far and few between. I believe that Jimmy Carter was in office...
February 6, 2020 at 3:57 PM

Fuji said…
When I hear the name Mookie... I think of the movie Do The Right Thing. As for the trade, I've got mixed feelings about it. I wish Mookie would have signed an extension and become a lifelong Red Sox, because I like seeing players stay with one franchise. But I'm happy he's not headed to the Evil Empire. Not that the Sox would trade them to their rivals. I just hope that he doesn't end up leaving LA to sign with the Yankees next year.
February 7, 2020 at 7:57 PM