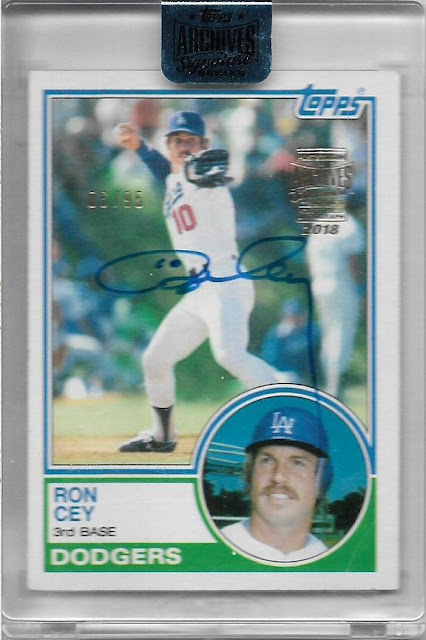 Today is the birthday of my all-time favorite player, Ron Cey.

I usually try to find a new card of Cey around his birthday, but we happen to be in a dry spell for new Ron Cey cards.

The most recent ones issued are from 2018 and they are hardly new cards. One of them is shown right here, it's simply a 1983 Topps card, signed by Cey and then encased in plastic to make it look fancy. It's not a new card. But I happen to have two of them.

To find a new card of Cey you have to go back to 2017 when Topps Archives put him in their Snapshots series. 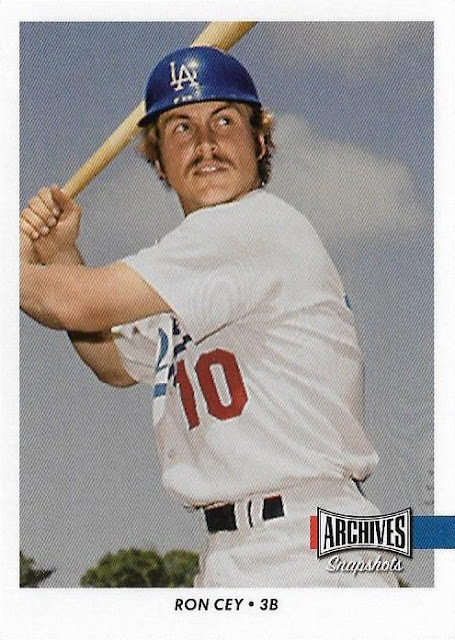 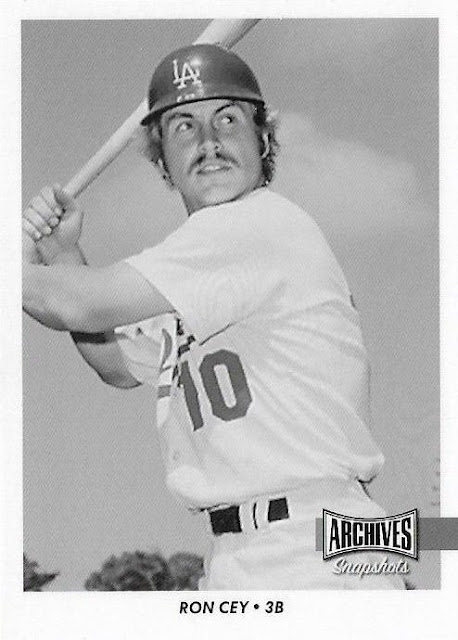 There are parallels, of course. And autographs, of course. This is basically what's left for me to collect of Cey's cards: parallels, autographs and relics. These really don't interest me much, I have plenty of all three.

I'm not complaining. I don't really need more cards of Cey to collect. I'm kind of glad that Topps has moved on to 1990s nostalgia (ugh) and is producing cards of Matt Williams and Jason Giambi (ugh, ugh). I get to focus on what I really want.

But I thought it would be fun to investigate the years since Cey retired, after the 1987 season, and find out which years were good for finding Cey cards. 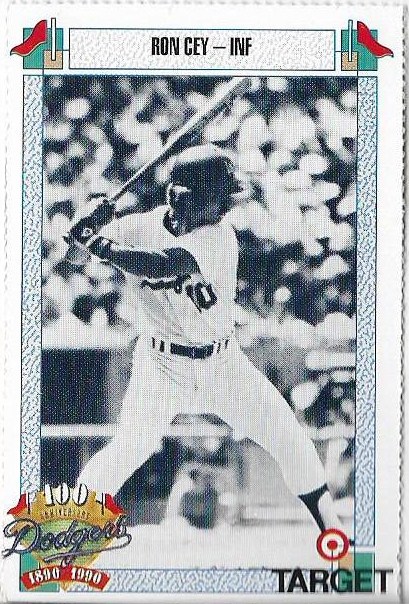 1993: The Ted Williams Company arrives and issues a set full of past greats, but captures my heart by issuing many cards of players from the 1970s. Ron Cey is included.

1994: Upper Deck issues its Baseball Heroes set, which also includes lots of fun players from the 1960s and 1970s. Again, Cey is included. This is also the first set since Cey's retirement where you can find parallels with those 125th anniversary stamped things. Yes, I have one. No, I don't understand the point. 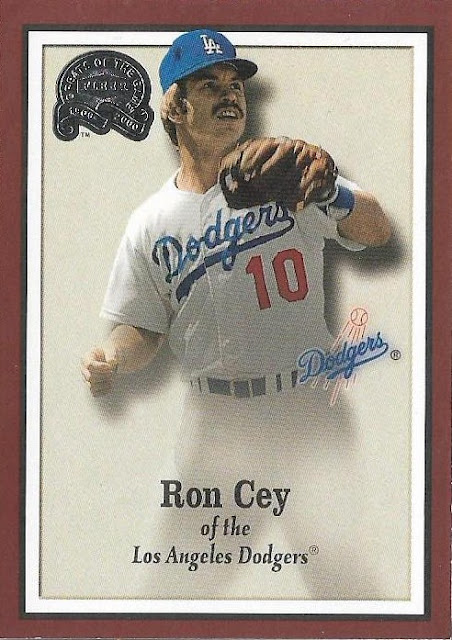 2000: So begins the golden years of retro sets and Cey was a big beneficiary, beginning with the first Fleer Greats set. This set also includes autographs, including one of Cey. I haven't bothered to get one. Again, I have so many Cey autographs.

2001: Ron Cey is all over the place, in the Topps American Pie set and the Upper Deck Decade the '70s set and in Topps Archives. Autographs and relics, too. 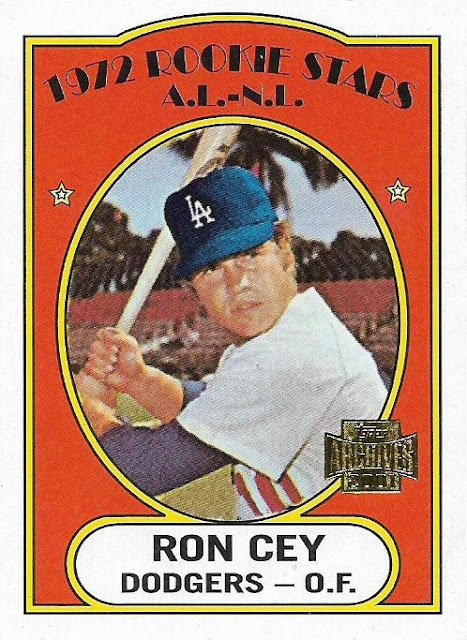 This card in particular is notable on this particular Ron Cey birthday. More in a little bit.

This year also happens to mark the arrival of Cey photos minus his trademark mustache. Cey with a mustache was all I ever knew when I was collecting cards of his as a kid, so this was (and still is) a bit weird.

2002: Fleer Greats and Topps Archives are back and so is Cey.

2003: Topps All-Time Fan Favorites arrives and Cey is included. Same with Topps Retired Signatures. Also Upper Deck Sweet Spot Classic becomes a thing and Cey is in that, too. 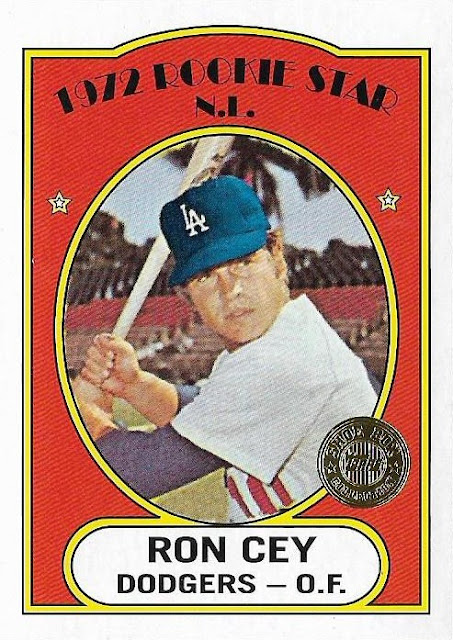 Then there is this. I could never figure out Topps' 2003 Shoebox Collection set. It's just Archives with many of the same Archives cards, right?

2006: Everyone except Fleer gets off the Ron Cey bandwagon. Fleer continues with its Greats of the Game set, which was absolutely fantastic in 2006. Lots of good stuff here.

In 2014, Upper Deck puts out a card of Cey in a top hat for Goodwin Champions, a card I don't need to show again.

And now you're up to date on Cey cards since his retirement. 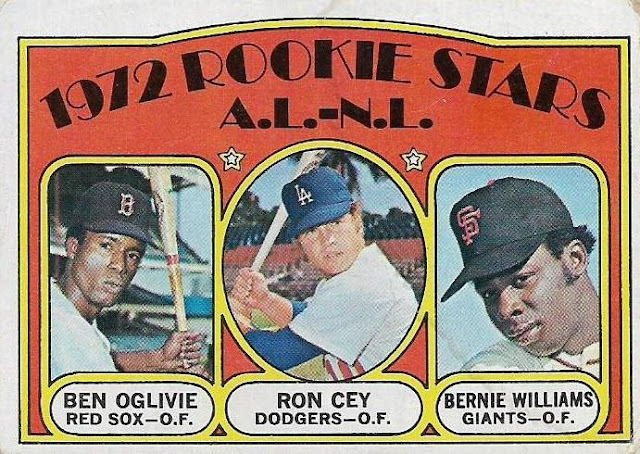 Cey happens to be 72 today.

So his age matches the year of his rookie card, making this his baseball card debut birthday!

I'd like to see some player from the '90s do that.

Chris said…
I did not realize Cey's birthday was today when I posted the Dodgers All-Time team. What a coincidence! And it's neat that his RC is in '72. I actually thought the '73 Schmidt RC was also Cey's first card - which would have been a bummer for anyone collecting the Penguin.
February 15, 2020 at 11:59 PM

Fuji said…
Update. I just checked out COMC and looked up his cards. Here's my Top 5 favorites: