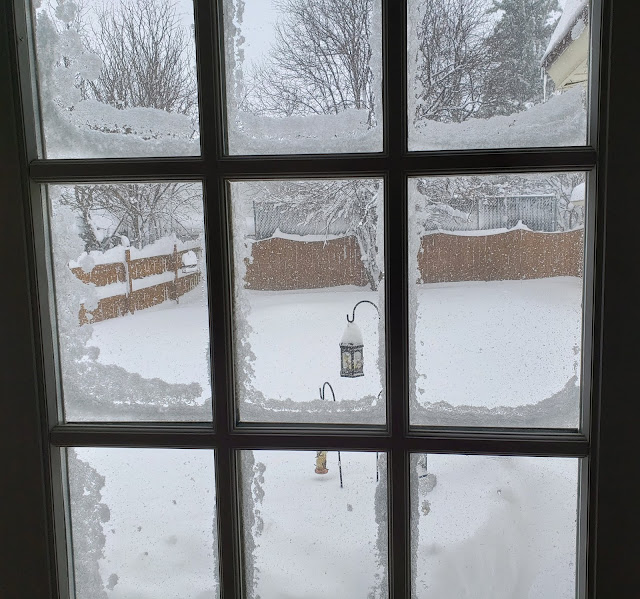 This was the scene outside in my backyard a couple of hours ago.

It pretty much looks this way still, except the roads are plowed out a little, enough for me to get to work.

We received more than two feet of snow in a 12-hour period overnight and this morning. It makes the thought of "maybe I'll head over to Target and see if there's any 2020 Heritage" a ridiculous one. Obviously I won't be doing that until Monday at the earliest.

There's really not much to do around here when the weather is like this. Once shoveling and inside "responsibilities" are finished, I'm down to either playing with my cards or going online to see what other people are doing with cards.

It's that second part that gets me in trouble -- or, more accurately, gets me irked.

It's just a little thing really. But it's bothered me for years.

It comes up quite frequently and I've heard it more often now that Heritage is out. 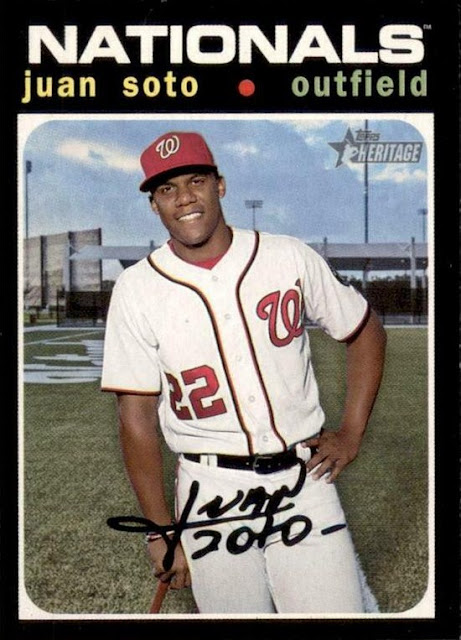 Twice already, I've heard or read collectors describe Heritage, when mentioning that it is paying tribute to the 1971 Topps design, by adding ... and this is their exact words ... "with the infamous black borders."

That has all kinds of negative connotations.

To be clear, I have never labeled the '71 set, or its borders, "infamous." I've called them beautiful, mysterious, bad-ass. To me these are all of the things that would make a set "famous," not "infamous."

I know why some collectors slap "infamous" or "notorious" on the set, though.

It's the influence of grading over the last couple of decades. Collectors want their cards pristine, so they can get the best PSA grade, and in general that's led to a much more prevalent mind-set that cards must look "perfect," sharp corners, well-centered, not a sign of wear, than in the years when I was collecting in the '70s and '80s.

This is why more recent collectors label sets from the '70s as "that period when card companies had quality-control problems." But there were no quality control problems! Collectors just weren't that particular then. Cards came out of the packs that I collected as a kid, 60-40 or with a little snow on the surface, and no one cared. I certainly didn't. 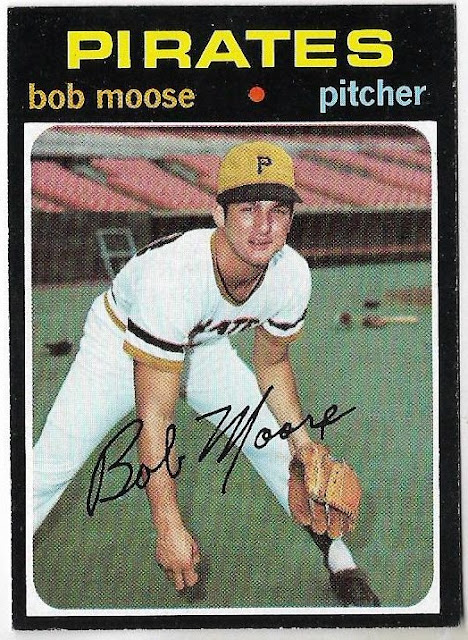 Some of the cards in my collection look like this. Black borders virtually intact, sharp as all get-out, just stunning, although I'm sure a modern collector would have an issue with that top-to-bottom centering, and probably left-to-right, too.

I'm quite content with a card of that condition in my complete 1971 binder. 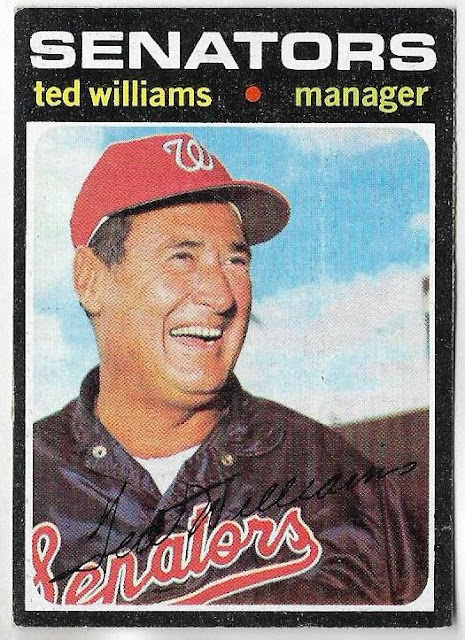 I am also content with a card of this condition in my '71 binder. Many of the '71 cards in my collection look like this. Overall, the card is in great shape, but there is edge wear (which the black borders really highlight, as those fussy collectors so often point out), and there is some minor corner wear.

Don't care. Will never attempt to upgrade. Yeah, if someone sent me a Williams card in better shape, I'd probably swap this one out, but it will never bother me that this present one is in this condition. 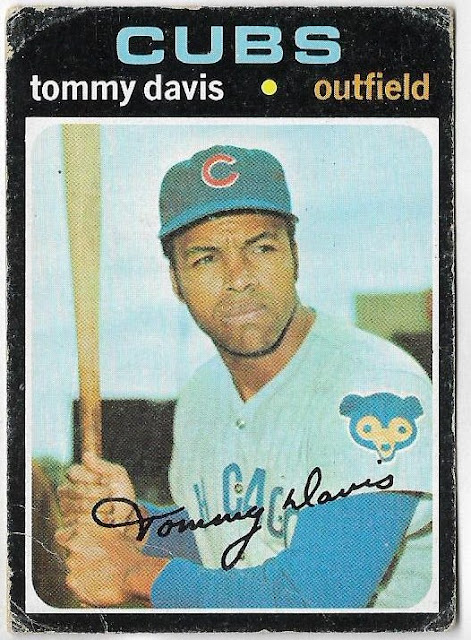 Neither will this one. It has more pronounced wear on the edges and corners and there are even some minor creases. This is a card that I received back when I was a teenager and it was never upgraded because I'm fine with this.

Admittedly, I am perfectly content with my 1971s because I don't grade my cards or sell them. I have only my own standards to consider.

Other people can collect how they want, with whatever condition standard they want, that's always cool. But it hurts my ears to listen to someone call a set that I have always thought of as one of the greatest Topps has ever made, basically the coolest set that Topps has ever made, "disgraceful" or "evil," or accuse it of somehow committing an offense. (I was watching a Heritage box break and someone was already picking on one of the Heritage cards coming out of the pack because he noticed a fleck of white on the corner).

And I'm sad when I think that some collectors, set-collectors in fact, dismiss collecting the '71 set because the borders are sensitive to chipping.

I like well-conditioned cards, but I'd never let the design stand in the way of collecting a set if I like the design.

The '71 Topps set is the oldest one I have completed and even with the various conditions of the cards in the set, I am quite proud of completing it. It is one of my favorite card collecting deeds, almost plaque-worthy. And when I think of it ... 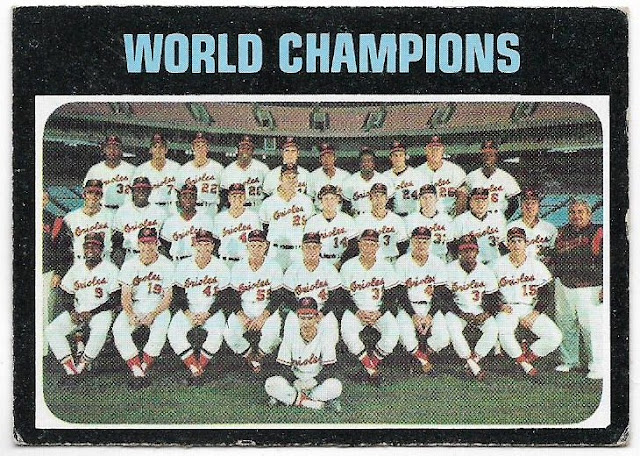 ... I feel like a World Champion. Chipped borders and all.

Johnnys Trading Spot said…
I most certainly don't need grade-able cards for my vintage card sets. Of course I'd prefer them all be NM (raw). But that's where money comes into play. Hay nooooo will I pay those prices for perfect 71's. Nope, uh ah, ain't gonna do it. Don't get me wrong, I do have plenty that are sweet, but certainly not the super stars.
February 28, 2020 at 9:16 PM

steelehere said…
If I ever finish my 1971 set, I'd be happy to have the cards in a similar condition as yours.

I've never experienced one living in Southern California my whole life but a snow storm in late February doesn't sound like something fun. (I also won't mention what the temperature has been lately out here but let's just say the grass at Chavez Ravine got a healthy dose of sunshine the past couple days).
February 28, 2020 at 9:32 PM

carlsonjok said…
I hear exactly what you are saying, my brother from another mother. I have never regretted leaving modern behind and focusing solely on vintage. so much less negativity involved.
February 29, 2020 at 1:13 AM

Bo said…
We've had virtually no snow this winter on Long Island which is almost unheard of.
If anyone has any unwanted banged-up '71s I'll take them! And I have plenty of banged-up '71s to trade.
And for anyone who doesn't like those visible creases, do like a buddy of mine and just fill them in with a black Sharpie!
February 29, 2020 at 5:09 PM

Base Card Hero said…
In Chicago last week we were supposed to get between 2" and 14". Quite the range, right? We ended up getting a dusting and I was happy with that.

gregory said…
Sometimes these days it's better not to even listen to what people out there are saying. Or you can just assume/pretend that when they say "infamous", they really mean "famous".

Fuji said…
I see both sides on the "infamous" issue. But I'm a guy who enjoys both cards with character (well-worn trading cards) as well as graded cards. If money wasn't an issue, I'd probably go after a 1971 set. But honestly I've gotta get my 1973 Topps set first. Then after that... I'd like to start knocking off more of the hall of famers in the 1956 set. So these black bordered beauties are going to have to wait unless I come across one heck of a bargain at the next card show or flea market.
March 1, 2020 at 10:55 AM

RunForeKelloggs said…
Upgrade a card from my youth that was used to complete a set? Not a chance. Those 1971s are great whether they look new or like they were in your pocket in school during fourth grade.
March 1, 2020 at 11:35 AM