'56 of the month: Andy Seminick 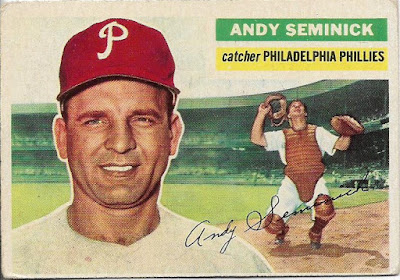 I've written a handful of posts about Frank Smith, a former major leaguer from where I live who was a relief pitcher for the Reds and Cardinals during the 1950s.

I had the thrill of writing some stories about Smith, long after his playing career had ended, both before and after his death. It is still one of my greatest honors as a writer to have written Smith's "sports section obituary" after he died in 2005.

I got to know Smith a little bit between 2002-05 and that made me want to know some of the other people that spent time with him during the majors. Smith mentioned that some of his best friends in baseball while he played were Ken Boyer and Harvey Haddix with the Cardinals. But probably his best friend of all was Andy Seminick with the Reds.

That makes sense because Seminick was a catcher and caught Smith when the two played together from 1952-54.

When Smith mentioned Seminick when I wrote that first story, I had never heard of him. I figured he was one of those '50s players lost to time, never a star who never played for those big '50s teams, the Yankees, Dodgers or Giants.

But Seminick did play for one of those big '50s teams, he was the catcher for the 1950 Whiz Kids, the Philadelphia Phillies team that made it all the way to the World Series.

I dug deeper and was fascinated by what I found.

Seminick came from a very poor background, growing up during the Depression. His family were immigrants from Russia. Dad worked for a coal-mining company, when he could find work. If he couldn't, he'd work on farms as a hired hand type. Andy, meanwhile, worked in the coal mines as a youngster, for two years.

Seminick always played behind the plate, but he wasn't always good at it. He led the National League in errors three times during the 1940s. Philadelphia fans noticed and booed him relentlessly. It became so bad that some female fans felt sorry for him and started a fan club for Seminick. It became one of the most popular fan clubs for Phillies players, particularly when Seminick was named to the All-Star team in 1949 and helped Philadelphia to the pennant the following year.

Seminick took no flack on the field and there was a famous dust-up, which involved the police, with the New York Giants. Seminick took out the Giants' catcher and second baseman on the base paths after the Giants' Eddie Stanky refused to stop distracting Seminick when he was batting. Giants manager Leo Durocher commented that the Giants would have had to play with minor leaguers if umpires hadn't eventually ejected Seminick because they were running out of healthy guys.

Seminick played through a great many injuries during his career and became known for his toughness just because he refused to sit out despite his injuries.

Seminick died in 2004, one year before Smith did.

One other interesting thing I found: Seminick delivered a game-winning base hit off of his future pal, Smith, on Aug. 1, 1950. 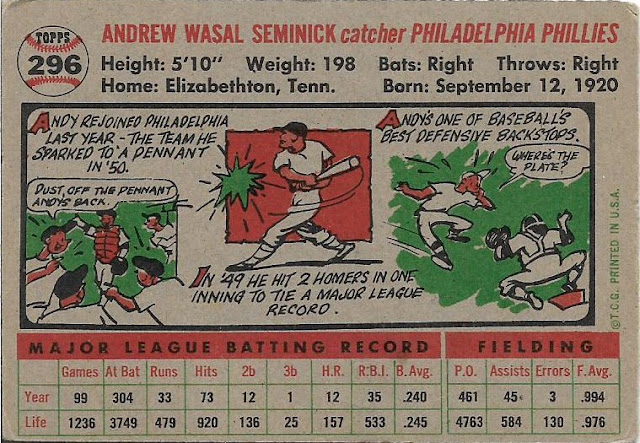 Now I know a little more about Andy Seminick (and you do, too).

Seems only fair after writing so much about one of his best friends.

(P.S.: Many thanks to the Society for American Baseball Research for yet another one of their very detailed biographies).

Angus said…
What a great looking card, and thanks for the info about a player than I didn't know anything about.
July 25, 2019 at 8:13 PM

Jim from Downingtown said…
Seminick was the Phillies' bullpen coach in the late 1960s, and I think he was a minor league manager or instructor for them after that.
July 25, 2019 at 8:19 PM