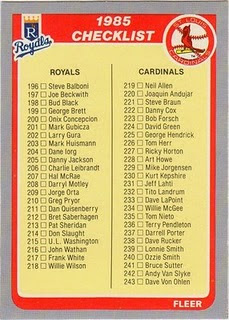 It's the final few days of the season. The winners of each division have already been determined, and all that remains is a couple wild-card races.

Around this time of year, the more daring revisit their preseason predictions and see how accurate they were. The gutless try to pretend they never made any.

I'm not gutless, but all I'll say is I predicted two division winners correctly -- the Rangers and the Brewers. I also correctly said that the Dodgers would finish third. As for the rest, you'll have to find the post yourself.

But even if you did predict a bunch of place-finishes correctly, that's really not much of a feat. Anyone can do that a few months before the fact.

Now, predicting World Series opponents YEARS before the fact -- that is something really worth noting. Mystical, magical, spooky stuff.

It seems impossible to do. But Fleer did it over and over again during the 1980s.

The card above is just one example. Fleer put the Royals and Cardinals together on its 1985 checklist card, and a few months later, both teams were facing each other in the '85 World Series.

How did they do that? 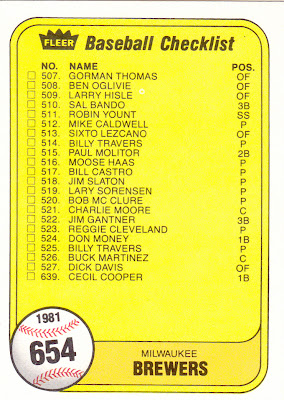 But Fleer was prognosticating correctly right from its return to the card scene in 1981. The checklist cards that year featured one team on the front and another team on the back, a format it used until '85.

On this card, the Brewers are on the front. 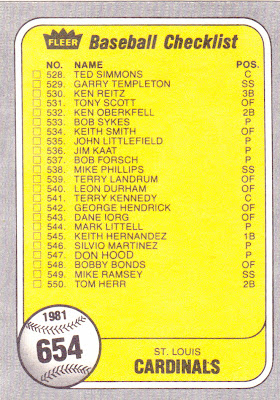 And the Cardinals are on the back.

One year later, the Brewers and Cardinals would play each other in the "Suds Series."

Fleer seemed to emphasize that it knew about the imminent matchup by repeating the pairing in the 1982 set. "Really, Vegas, start placing your bets. The Brewers and Cardinals are playing in the Series. It's a lock." 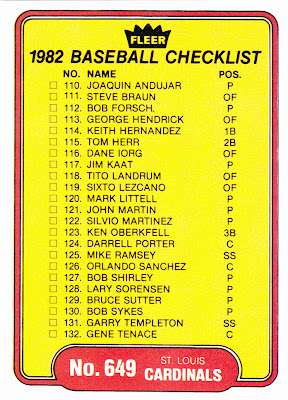 This time the Cardinals were on the front. 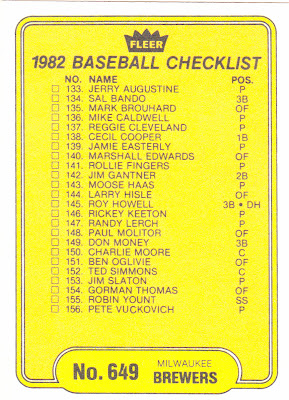 And the Brewers on the back. That October, the Cardinals beat the Brewers in the Series. If only the odds-makers knew about Fleer's checklists. 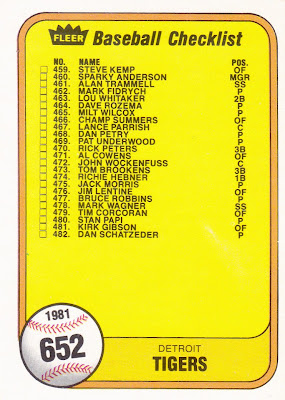 But Fleer wasn't satisfied predicting one Series matchup with its 1981 checklist pairings. It did it again with the Tigers. 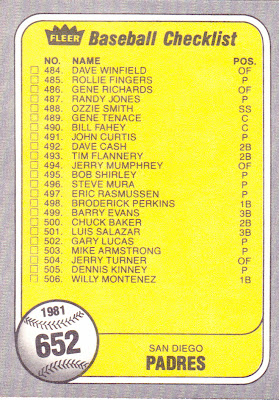 The back of the Tigers checklist featured the Padres' checklist.

Three years later, the Tigers met the Padres in the World Series. It seemed like such a strange pairing, something no one could have dreamed up at the time  ... unless you were one of Fleer's psychic readers. 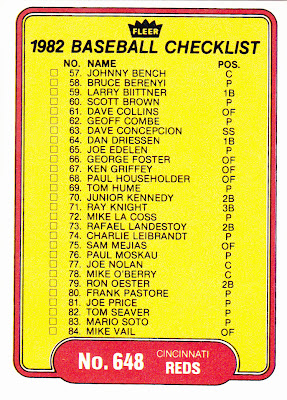 And Fleer could see even farther into the future. Here is the 1982 Fleer Reds checklist. 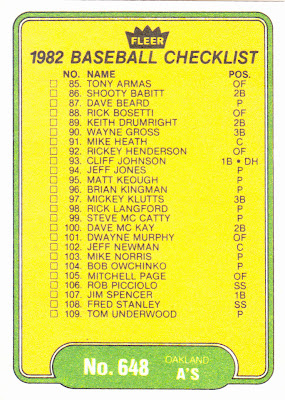 The back of that card displays the A's checklist. Lo, and gosh golly gee, the Reds and A's met eight years later in the 1990 World Series.

Fleer had done it again.

Now, some of you more rational, critical types may have already come up with an explanation. You are probably familiar with Fleer's 1980s habit of numbering its set by team. And each team was ordered in the set based on where they finished the previous season. So the team that won the World Series the previous year was numbered first, followed by the Series runner-up, playoff teams, right down to the team with the worst record in the league.

It was a charming and welcome way of numbering cards, and for you party-pooper types, it explains why Fleer paired up the checklists the way they did. It merely paired up the two teams in the order that they appeared in the set. It's just dumb luck that some of them later met in future World Series matchups.

Come on, get a grip, Night Owl.

First, you're no fun at all. 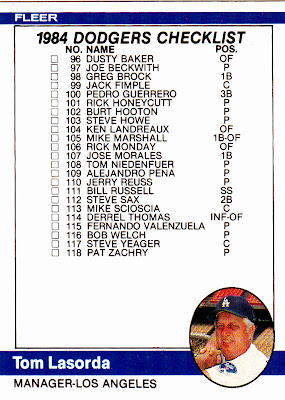 But here's that boring back: 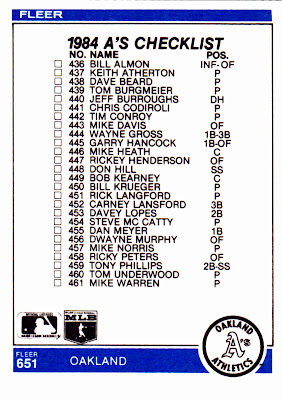 Four years later, the Impossible Would Happen, and the Dodgers would beat the A's in the 1988 World Series.

Those two teams aren't next to each other in Fleer's numbering system at all!

Yet Fleer called the series matchup four years before the fact.

They were a bunch of psychic gypsies, I'm telling ya.

Anonymous said…
I may be a little biased (actually I am totally alot biased) - but that Reds win over the A's was more impossible than LAD! The 88 Dodgers had a pitcher in the middle of the best run I've seen my lifetime (I'd bet the best I'll ever see). The Reds had... a 25-deep team with 3 or 4 All-stars.

Play at the Plate said…
No one else could make me read a post about 1980's Fleer checklists. No one.