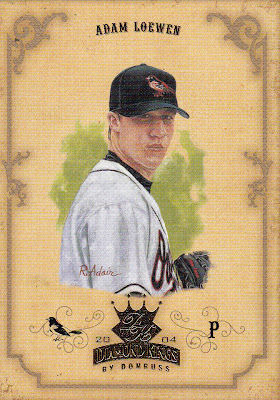 While doing my annual delayed post-Christmas shopping yesterday (you will never find me in a store Dec. 26), I snagged a long-awaited ipod for meself. I don't know what took me so long.

I also grabbed a rack pack of random cards at the drug store. It was a toss-up between the jumbo pack of "100 Baseball Cards" that I wrote about previously, and a rack pack of 2010 Topps 206.

Why are we buying current cards again?

I already knew what would be in the pack with the picture of Anonymous Baseball Man. Lots of junk wax. But there'd be a few random gems, too, which makes this pack much more interesting than a pack featuring Placido Polanco's round, bald skull.

I waited to open my 100 Baseball Cards in the hazy, buzzy first few hours of 2011. Skipping all of the junkiness, this is what was left: 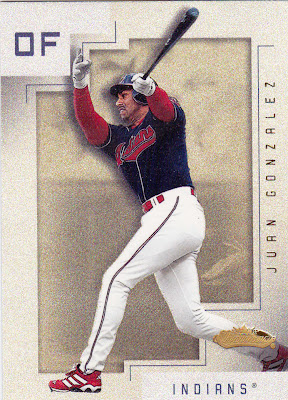 I am hopelessly attracted to any Fleer product issued between 2000-04. 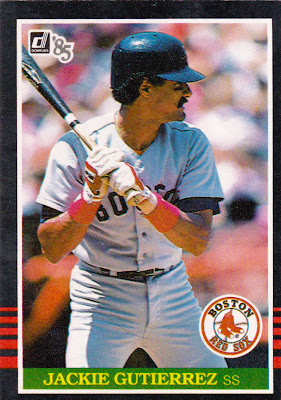 1985 Donruss is my second favorite base Donruss product ever. For some reason I have only 30-40 cards in the set. 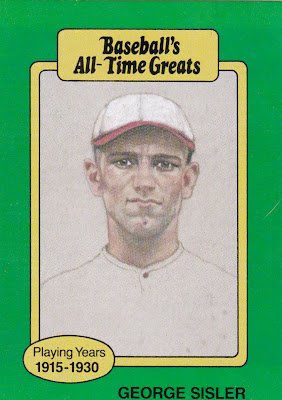 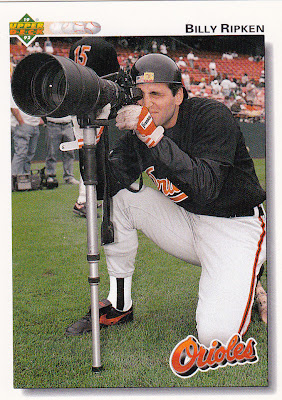 I think this conversation happened a lot at card companies -- especially Upper Deck -- during the early '90s: 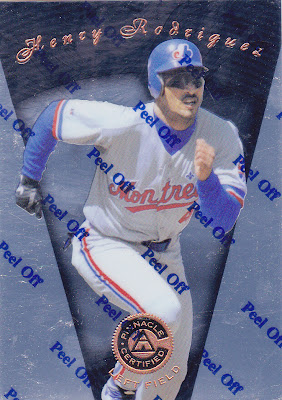 A Pinnacle Certified card of H-Rod! That is cool. That makes me happier than almost anything I could find out of 206.

Also, according to the wrapper, one in four of these packs contains a hit. I believe it's a relic card only, but I've chucked the wrapper, so I'm not completely certain.

But I did get a hit.

Observe ... or, more appropriately, prepare to cover your face in horror: 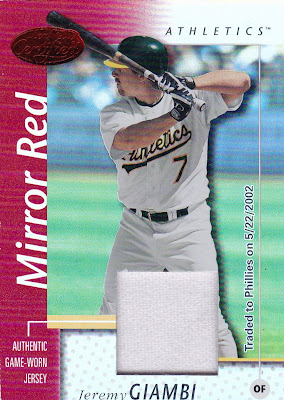 Yes, you are not seeing things. That indeed is a jersey relic of Jeremy Giambi, traded to Phillies on 5/22/2002.

That is awesome in an embarrassing sort of way. That might be the worst hit I have pulled of all-time. The Angel Berroa bat card would challenge it, but at least he was a Dodger at the time.

This Leaf Certified card is actually the first card of Jeremy Giambi I have ever owned. His playing career, from 1998-2003, occurred right when I didn't care a drop for collecting. No offense, Jeremy. But you weren't missed.

My entire knowledge of Giambi consists of him being the younger brother of Jason, getting busted for both pot and steroids, and helping to enhance the legend of Derek Jeter by failing to slide and barely getting tagged out by Jorge Posada on the dreaded flip play.

Jeremy, it is barely 15 hours into 2011, and I think you might have the honor of being the worst hit pulled by me the entire year.

Two Packs A Day said…
wow, you have too high of expectations if you expect anything but a junk relic or auto from those packs.

I bet either the company that produces those packs sells the higher value hits and only puts the crummy ones in packs or the relics/autos Blowout is buying make their way to that company intended for those packs.
January 1, 2011 at 3:24 PM

night owl said…
I have no expectations. Just commenting on the quality of the hit. In fact, I'll probably buy another in an attempt to get something else as awesomely bad.
January 1, 2011 at 3:49 PM

Section 36 said…
Former team jersey hits are the worst. Especially when it says it's the former team on the card.

Every time I see that play, I wonder why Jeter gets so much credit for cutting off a ball that was on line, and in time, taking it two steps in the wrong direction, and flipping it so Posada has a much tougher play. If the ump doesn't blow the call, it's a horrible play.
January 1, 2011 at 7:45 PM

Matt Pederson said…
I bought one of those packs a while ago and had the fantastic "pull" of a Ben Sheets BAT relic. I know he's a decent player, but pulling a bat card of a pitcher has me a little underwhelmed for some reason.
January 2, 2011 at 1:51 AM