December 01, 2008
(If you stop to think about it for a minute, what we have with this card blogging community is simply an online Mutual Appreciation Society. But it's not that we fawn all over each other -- although that happens, oh, shall we say, periodically. It's that we all appreciate the same thing: BASEBALL CARDS. It's time for Cardboard Appreciation. This is the 8th in a series): 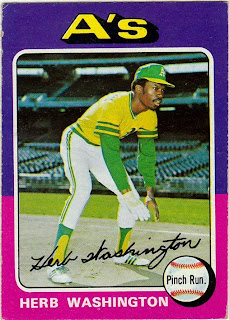 This is an all-time favorite for a lot of people, all because of what it says on that baseball in the lower right corner.

That's right: "Pinch Run." (not exactly the abbreviation for Pinch Runner that most people know). It is supposedly the only card ever issued with that position listing.

As many people know, Herb Washington was a Charlie O. Finley creation. Washington was a world-class sprinter out of Michigan State, and he became Oakland's "designated runner" during the 1974 season. Washington hadn't played baseball since high school, but that didn't matter because he never came to the plate, nor played the field, during 105 games in the major leagues.

As wonderful as the front of the card is, the back is even better. 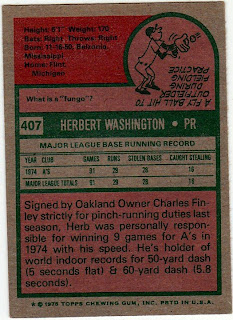 Washington has the most unique stat line ever issued on a baseball card: Games, Runs, Stolen Bases, Caught Stealing. That's it. The write-up is interesting, too. It mentions how "Herb was personally responsible for winning 9 games for A's in 1974 with his speed." I don't know how they came up with that figure, and Topps apparently didn't want to explain it.

Another key item is the cartoon on the back. It asks: What is a fungo? Interesting. Do you think Herb Washington knew what a fungo was in 1974? Maybe, maybe not.

When I think of Herb Washington, I think of how he was picked off first base in the ninth inning of Game 2 of 1974 World Series by Dodgers reliever Mike Marshall. One of the few positive moments for L.A. in that Series.

According to the quasi-reliable wikipedia, Washington is now a successful businessman, owns several McDonald's franchises and a minor league hockey team.

Good for Washington. He wasn't content to remain a novelty, even though that's how baseball fans will remember him. And why his 1975 Topps card is so appreciated.

Dinged Corners said…
We are appreciating your cardboard apprec.

jacobmrley said…
i remember coming across this card as a kid in my older brother's stack and being really confused by it. we didn't have the series of tubes known as the internets then, so i had to really ask around to find someone who could explain it to me...

i think it is rob neyer (it might have been bill james) who does a great dissertation on how Charlie Finley was obsessed with the concept of a really fast guy as a designated runner, not realizing that baseball smarts are as important to stealing as speed. at one point, Charlie O has like 3 guys who were basically only there for speed without a lick of baseball ability - herb washington being the most famous.
December 1, 2008 at 3:31 AM

Timberhill said…
This card isn't worth anything, but it is maybe my favorite card in my collection for the reasons you've laid out here.

I hadn't heard of him until he was mentioned in a post on the 88 Topps blog. I did a little internets research between baseballreference and wikipedia and learned of this card's existence and ran to my local card shop to find a copy.

Johngy said…
I really liked the 75 cards. Maybe it is just because they are the first set I complete via packs.
The Wshington card is especially cool for all of the reasons you listed, plus it is just a simple, beautiful picture. Old school perhaps, but simply beautiful.
December 1, 2008 at 6:39 PM

Rick Rodriguez said…
I grew up in the Bay Area in the 1970's and still live here! Thanks for the selecting this card! I love it for the colors and the what you point out in the post. The classic kelly/green and gold uniforms of the Swingin A's of that era were pretty cool!
December 1, 2008 at 10:34 PM

Unknown said…
if your able to get your hands on his card and address he'll actually sign the card for u and send it back if u send him a postmarked envelop...trust me I know, im his daughter and people constantly send cards to the house to sign.
December 3, 2008 at 7:22 PM

Eric Stephen said…
This was a great post. Josh Wilker, in his own unique way, also used this card as a jumping point for one of his essays on his great Cardboard Gods site: