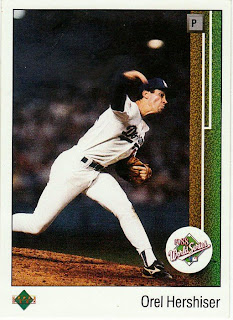 Since we are two weeks, two hours, and some odd minutes away from 2009, I figured I'd take another moment while I can and recognize the 20th anniversary of the Dodgers' last World Series title.

Upper Deck did a nice job in its inaugural outing of acknowledging the Series champs of 1988, producing several World Series cards. I love World Series cards, and postseason cards in general. I get annoyed when card companies ignore the postseason in their sets (1982 Topps, I'm talking to you).

Of course, here we have the World Series MVP, my favorite player at the time, Orel Hershiser. Casual fans can name Hershiser from the '88 team and Kirk Gibson, but probably few others. It was a real collection of overachievers. And that goes to show you that you can get by without the superstar at every position.

I think it was Jim of the garveyceyrusselllopes blog that reminded me that Alfredo Griffin was the Dodgers' shortstop in 1988. A sturdy player with a long career. But not a star. Jim was referring to my fear that the Dodgers were losing Rafael Furcal.

Well, it seems my fears were unfounded. Furcal and the Dodgers apparently have agreed to a three-year deal. My need to see Furcal back in Dodger blue seems to contradict what I just said about not needing a star in every spot. I realize that. I can't explain it. It's simply the insecure side of being a fan. And Furcal eases my insecurity.

If Furcal doesn't waffle (he's been annoying teams hither and yon the last month), and officially signs, L.A.'s infield looks pretty spiffy. Furcal just needs to hold it together for an entire year.

I don't care what others say about you, Raffy. Don't listen to them. I'm so glad you're back. 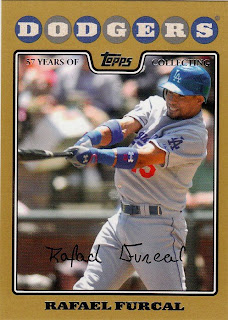