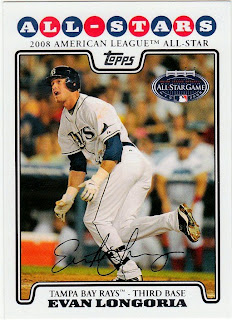 On this last day of 2008, it's fitting that I feature someone who had one heck of a 2008. In fact when you combine on-field success with "baseball card" success is there anyone else that had a more gangbusters year than Evan Longoria?

In terms of collecting buzz and actual on-field performance, Longoria has to be at the top. You could make a case for Albert Pujols and Josh Hamilton, I guess, but neither of their teams went to the World Series.

I admit, it took me a long time to get wind of who Longoria was. I'm about as far away from a "prospector" as you can get. But I'm on board now. There really is no hype with this guy. He's a fine, fine player who should have a long, long career.

Dave said…
I'm sorry that I just saw this post now. Awesome write-up on Evan! You know that I'm a big fan. And I loved that you pointed out that he went to the World Series. Sometimes I still think I'm going to wake up and find out that the Rays 2008 season was just a dream...
January 12, 2009 at 2:04 PM