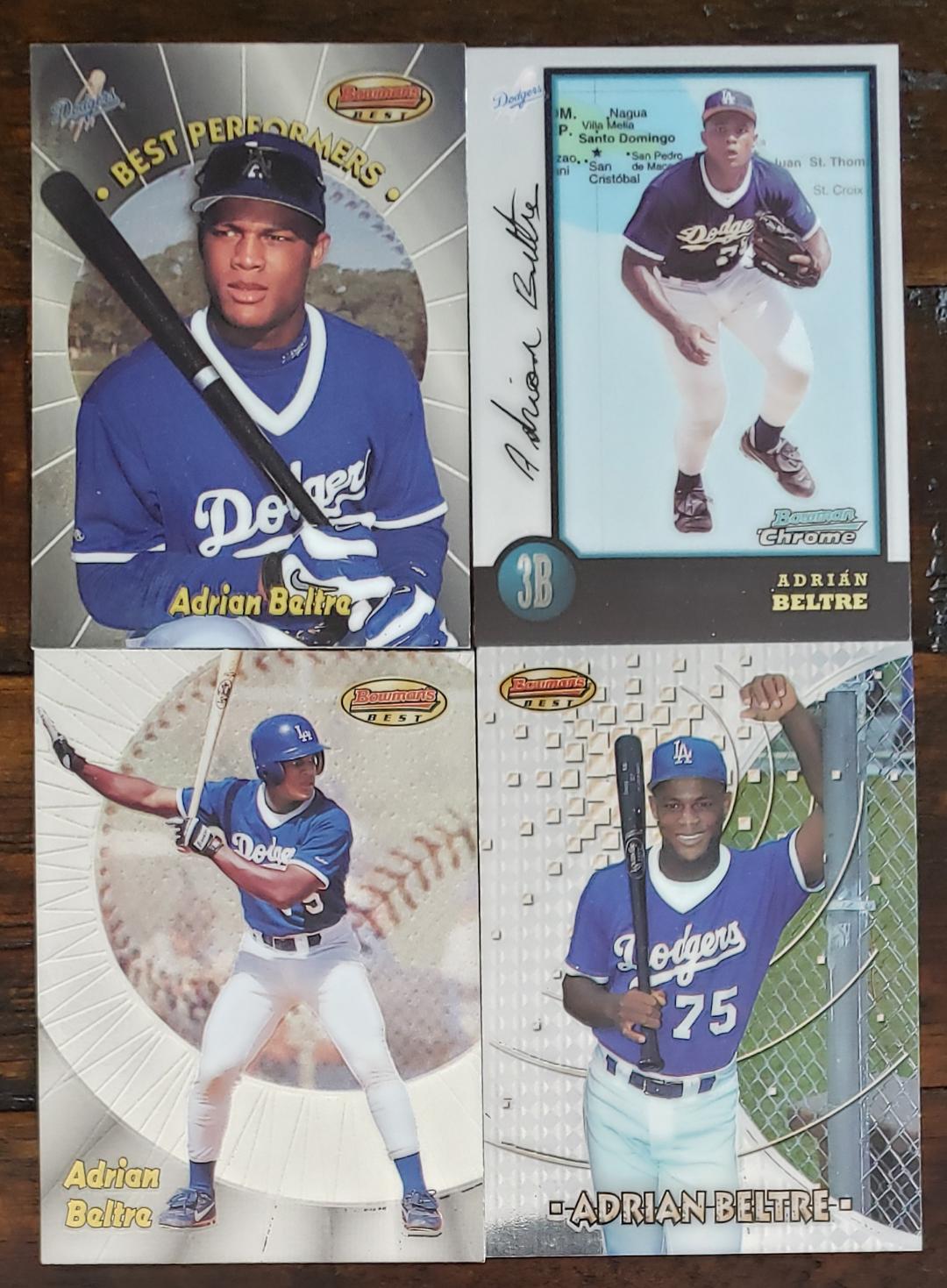 OK, here it is, the 5,000-card giveaway. I must be nuts:
A) This is a lot of cards.
B) This is a lot of work
C) This is a lot of postage
D) Who has the time?
E) There is youtube and Netflix to watch
F) There are spring training games to watch
G) This is a lot of work!
But I want to acknowledge people who are still at it, reading this blog after a dozen-plus years and 5,000-plus posts. Sure, probably most weren't around at the very beginning. I'd love to acknowledge them the most, but there's no way of verifying that, so I'm opening this giveaway up to everyone. Yeah, even you, anonymous, and, you, prize hound, and, you, folks who didn't even hear of this blog until "The 5,000-card giveaway ..." popped up on the social media site.
It's possible there won't be that many people who want the cards anyway. It's not like I'm giving away sapphire chrome or Formula 1 cards or whatever is the be-all right now.
All this is is (is is?) trying to produce is what I would like a repack to be when I buy a repack.
I want repacks to contain interesting cards. What usually happens is like 10 of the cards are interesting and the other two-thirds or three-quarters or four-fifths are "my god how many 1990 Donruss cards were printed anyway??"
So, what I'm doing is going through my collection and finding some cards that at least I think are interesting. Many of these are extras in my collection but some of them are not -- it's just time to get them out of the house, why am I hanging on to them?
I want to give away 20 "repacks" of 250 cards. Do the math, that's 5,000 cards. 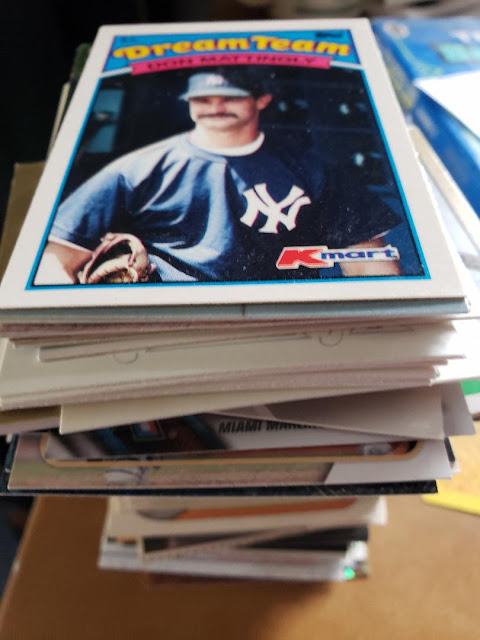 That there is the start of the giveaway. It's only about 300 cards in that picture. I haven't had any time to gather cards and there is still so much to get to.
The four Adrian Beltre cards at the top of the post will be included in the giveaway -- sorry, the one everyone wants isn't there, if I had it, it would be in my collection and no way would I be giving it away.
Here are some highlights-slash-a-good-representation-of-cards-contained-therein-if-you-should-win: 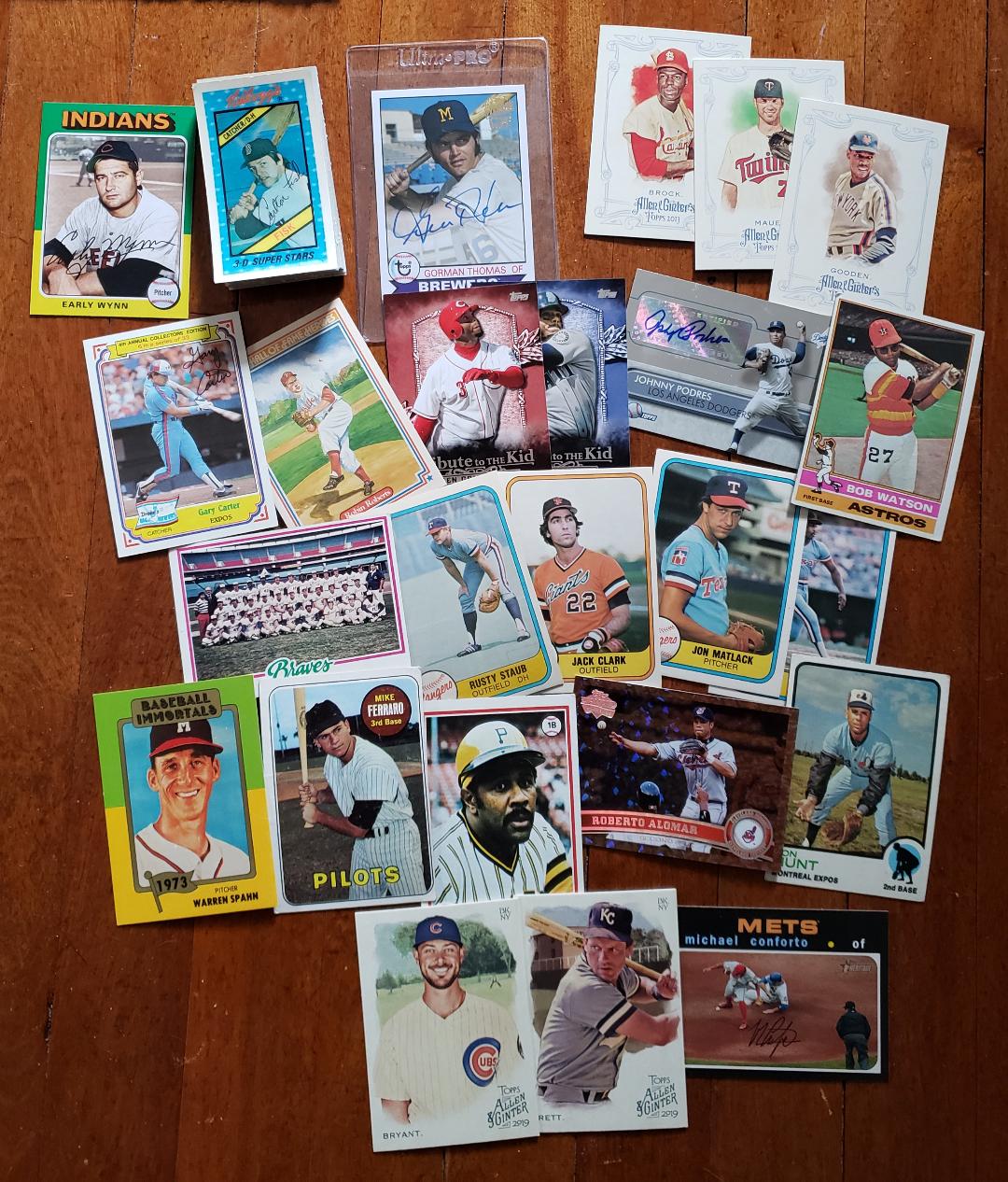 Just a sampling, really. The 1980 Kellogg's cards are extras and just about all are in great shape. This doesn't mean one person is getting all of those, I will distribute them across the board as a good repack would.
There will be other goodies too, which I haven't determined because, again, the job is behaving very rudely right now. But the cards will be a wide cross-section. And unlike the common variety repack, I have skipped anything that has to do with 1989 Fleer, 1991 Donruss, 1991 Upper Deck, 1987 Topps, 1989 Donruss, 1990 Fleer, 1989 Topps, 1991 Fleer, 1991 Score, etc, etc, you know the deal.
Anything related to that time period that happens to slip in will be either a star or notable player or an oddball. That's my mission anyway. There is no complaint department here, so if a 1988 Topps Donn Pall ends up in your giveaway repack, hey, see excuses A through G above. I'm just one guy here.
Also, I have these things: 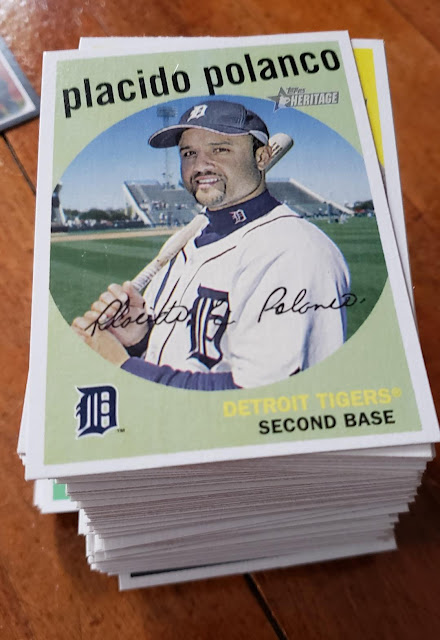 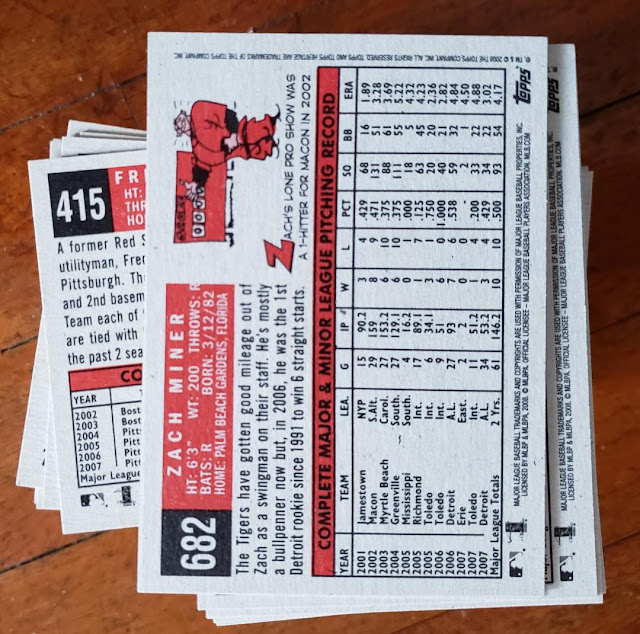 ... 2008 Topps Heritage black backs, plus whatever '08 Heritage High Number black backs I have.
I believe it's the entire 145-card black back main set. The reason I don't know for sure is because I haven't looked at them for a long time and have really, really, really, really, REALLY soured on back variations like this. I avoid looking at them because I'll just question what the heck I was doing spending money on such ridiculousness.
Plus, I still don't have the Jon Lester card from the main set and I just looked up the price on that and I am not paying 30-40 bucks for a card from 2008 just to finish my set. 2008 Heritage now contains a lot of pain for me, so it's best I get rid of at least SOME of the cards.
So, the Heritage will be a separate giveaway unrelated to the 5,000-card repack giveaway.
Now, this is how it's going to go:
The first 20 people who comment on this post who write "I want a repack," will get a 250-card repack.
If those people sign on as "anonymous," they must identify themselves in some way in the comment and then send an email to nightlite77@yahoo.com confirming their ID and providing an address. In fact, anyone -- except for those who regularly comment here and have dealt with me before as far as in the mailing cards realm -- better send me a contact address.
As for the 2008 Heritage black back giveaway, if you want in on that, mention it in the comments. For those people who want those cards, I will randomize the entrants and determine a winner.
I will write a post later mentioning who has won and updating the contest, etc.
Once you become a winner, know that you are at the mercy of:
A) The post office
B) My ridiculous lack of time
C) I only have so much space in the card room to stack cards
D) Um, I'm going on vacation very soon
E) I can deal with the post office only once a week and a maximum of 4-5 packages per visit without having a nervous breakdown
F) Opening Day is six days away
G) I'm kind of out of blue tape
H) That is a lot of postage
But it will get done.
Because I dig that you guys are still reading after all these years. You are good people. I get you.
So thanks for that.
Comment away, and I'm sorry if you missed this because you were watching a basketball game or whatever.
You should be reading Night Owl Cards at all times!
Kidding.
But really, you should be.
Thanks again.

Jordan said…
Night Owl, it’s been an honor and a privilege reading your blog all these years. I’d love to be a part of the giveaway.
April 1, 2022 at 7:17 PM

dayf said…
i want a repack

also i pulled that Lester card for you last year and forgot about it because my brain has been pandemic'd into guacamole
and not good guacamole the stuff made out of mushed peas and a teaspoon of jar salsa
April 1, 2022 at 7:26 PM

OhioTim said…
I would be more than happy to accept one of your repacks of cards. But it has been an even greater honor to have been reading your blog but also the magazine articles you have written. I look forward to reading your blog for many more years and posts to come. Thank you again for your contributions to our wonderful hobby.
April 1, 2022 at 7:34 PM

buckstorecards said…
"I want a repack"

night owl said…
Kevin Bradley was the 20th comment so he's the last guy in (But need to make sure I get addresses for everyone so Michael Gray is on deck in case I can't make a connection).

The Heritage black borders are still on the table.

Michael Gray said…
Argh I was hoping you were going to be persnickety about the phrasing and I would sneak in there!
April 1, 2022 at 9:28 PM

Brett Alan said…
Guess I should have read the blog before I watched Australian Would I Lie To You! (The American version premieres in about a week; if it's anything like the Australian and UK versions it'll be a treat.)

But I'm happy to enter for the Heritage black backs. Could use something to drown out the deGrom-shoulder-related sorrows. Thanks!
April 1, 2022 at 9:54 PM

bryan was here said…
Oh well, looks like that ship has sailed...

Cards are part of a hobby intro for the kiddos. Feel free to throw my name into the Heritage drawing. They would love to tackle the completion challenge, I’m sure.

Thanks again and congrats!!

I'm not even sure if you have any left but if you do have a repack for me I want one for sure. I'm just grateful for the quality content you produce here daily. It's not easy maintaining any blog around a job and a family, and watching your favorite team. Maintaining the Greatest Sports Card Blog of All Time with your schedule is an amazing feat. Congrats again on 5,000+ posts and thank you for offering a quality repack. I've missed those 200-card bricks that target used to have pre-Covid. It's great to see you producing one, whether I'm a recipient or not. :D

GTT said…
I wanted a repack... but I was at a track meet. Oh well. At least I did really well.

Pennsylvania Tiger said…
I want a repack… but I’m #32

Thanks for continuing to post such great stories, reading is its own reward
April 1, 2022 at 11:04 PM

Nachos Grande said…
Those Heritage cards are probably TCBD gold for a guy like me who is stupidly working on other Heritage sets...I'd take 'em!
April 1, 2022 at 11:13 PM

Fuji said…
I'm late to the party as usual. Those repacks sound like fun. As for the black back Heritage cards, I'd like my name tossed into the hat.
April 1, 2022 at 11:15 PM

Nick said…
Very late to the party here, but wanted to say again - Congrats on 5,000 posts, and this is a pretty excellent giveaway! Makes mine seem paltry in comparison!
April 2, 2022 at 12:32 AM

bbcardz said…
Such a generous giveaway! Those are some big "repacks" that look like they'll include some really cool cards and I could see postage being pretty hefty. Congrats to those that will be receiving the repacks and good luck to those who are in contention for the black back Heritage cards.
April 2, 2022 at 12:39 AM

Jon said…
I wanted to wait until everyone else made their claims before I commented. This was a very generous giveaway, and I hope all of the claimees appreciate how much you'll be spending alone just on the shipping for these repacks. For those that hadn't thought of that, postage for these is probably gonna be in the $80-100 range. That's a lot to spend on one's readers.
April 2, 2022 at 8:15 AM

night owl said…
Folks, only the first 20 people who commented get repacks. If I can't find addresses for all 20, then I'll got to the next people on the list.

AndyNY2 said…
Nice of you to do this. I'm too late for the 20 repacks but if I can still get in on the Heritage giveaway that'd be great. Thanks!

Jafronius said…
I'm game for the Heritage cards since I'm wat late for the repacks. Extremely generous of you sir!
April 2, 2022 at 3:25 PM

Mike Matson said…
Very late to the party.
Just want to thank you for doing something like this.
April 2, 2022 at 4:44 PM

MikeSchmidtHappens said…
I would love a repack, NO, if there are any left.