How many autographs is too many? 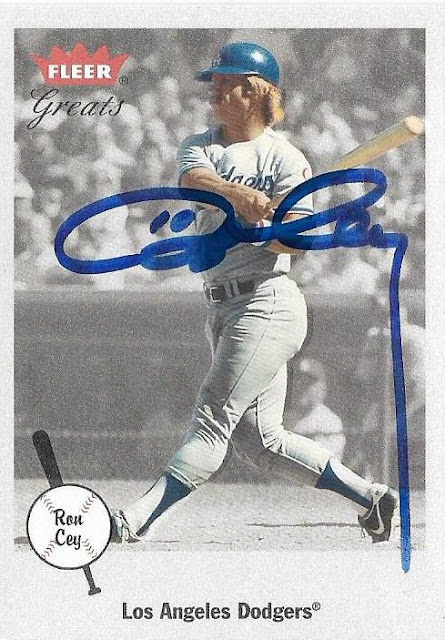 This is my 21st card autographed by Ron Cey.
I don't really try to obtain Cey autographs anymore. I own most of his certified autographs and I'm just not down with the TTM ritual any longer.
If I still sent autograph requests through the mail I'd have to pay a fee now for a Cey signature. He used to hand them out for free and return them in record time. Paying a price wouldn't stop me if I was still into it. There are still plenty of cards that could use a Cey signature: 1974, 1979, 1981 and 1982 Topps, 1983 Donruss, 1982 and 1983 Fleer.
If a card company puts out a new Cey autograph, such as Topps' recent Archives Fan Favorites offerings in 2017 and 2018, I will look into obtaining those, and I have at times. But I'm pretty casual about it.
I'll also take a Cey autographed card that I don't own if someone sends it. The above card arrived from John (@gortexturban on Twitter). And I needed it.
But how many autographs of one individual player is too many?
I ask myself that question because, as I've said before, I'm good with a single autographed card of one individual player. If I get his signature, I get to say, "I HAVE HIS AUTOGRAPH!" and we're done. No need to get another one.
It's not like actual cards where I have accumulated dozens and dozens for each individual player. Autograph collecting is not set collecting, usually.
So what am I doing with Cey and all those autographs?
Well, he's my favorite player of all-time. He's also venturing up there. He'll be 73 in February. Who knows for how long new Cey autographs will show up?
So I'll take all that I can, even if I'm not all that fired up over it.
Those 21 Cey autographed cards join the more eclectic Cey autographs that I own. There's the personally autographed birthday card from 2019. And, of course, there's the lamp. 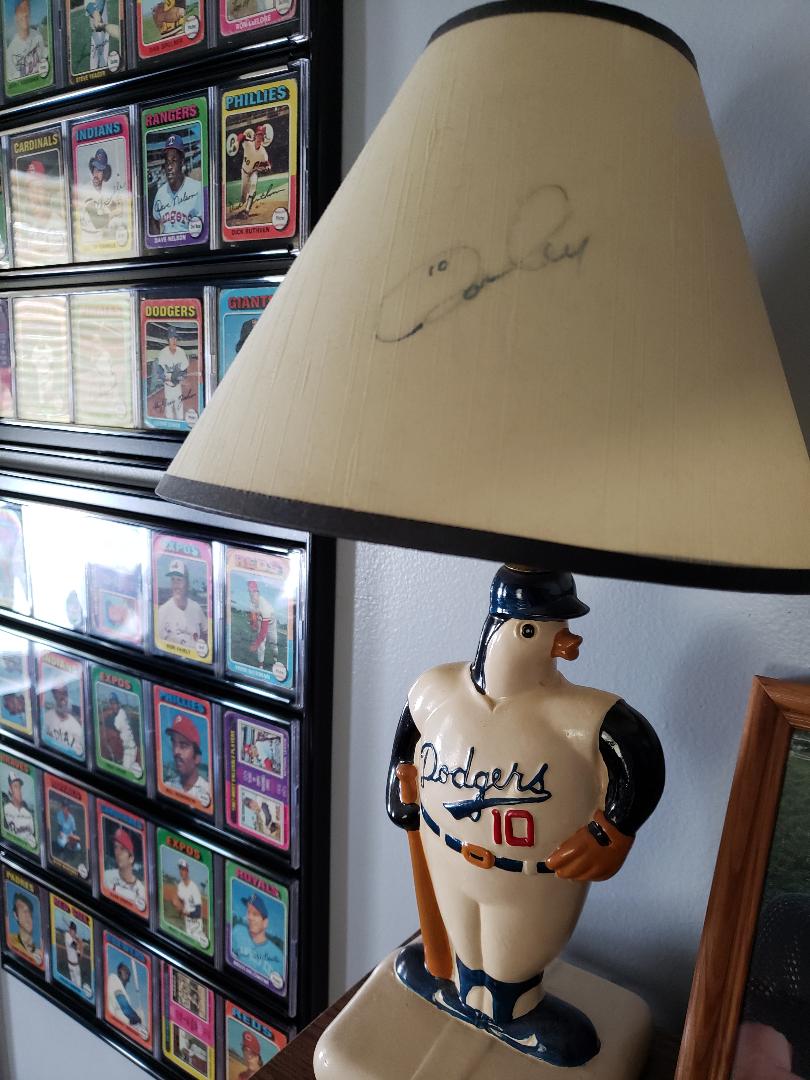 Haven't shown that for awhile.
So, really, I don't NEED any more new Cey autographs.
But I'll take any that folks send my way.
Cey joined a few more goodies in the envelope John sent. 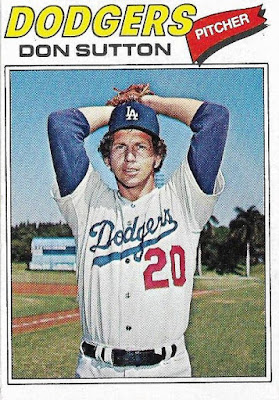 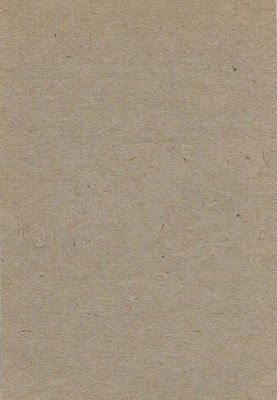 He wondered whether this was a box bottom card, but 1977 Topps didn't have box bottoms. This is a blank back. I have a handful of blank back '77 Dodgers. It seemed to be a thing in the '77 set, although I didn't pull a single one when I was buying packs that year. 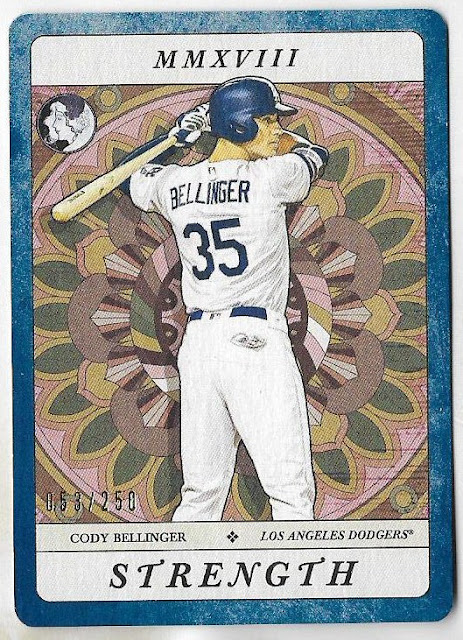 More insert parallels -- wooooooo! At least it's a border parallel. I miss those. 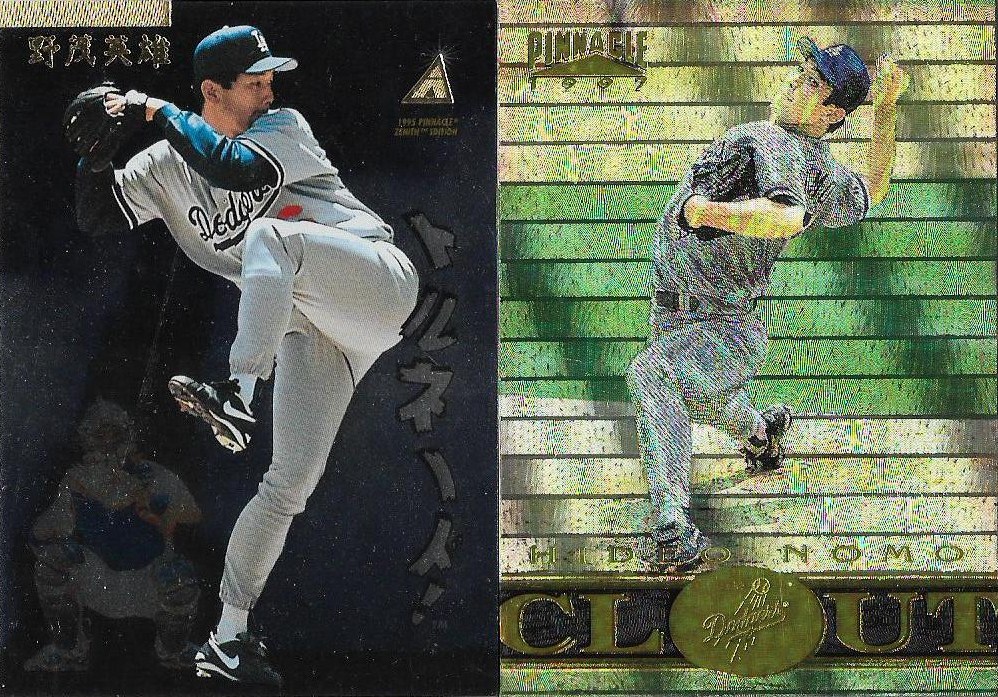 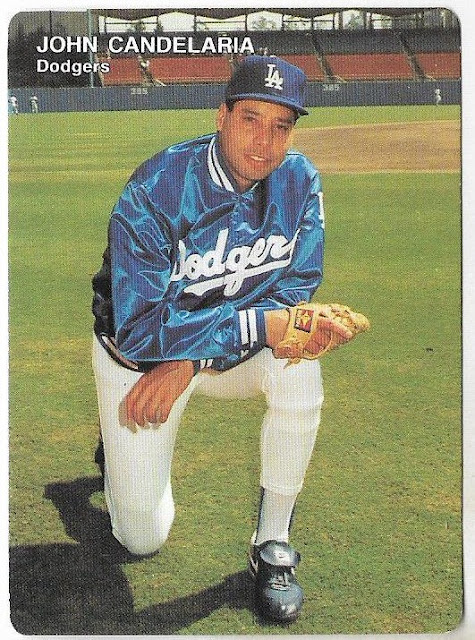 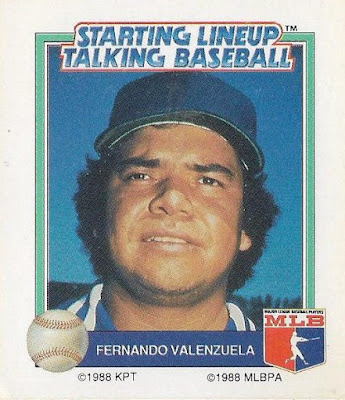 A couple of oddball needs. I'm pretty sure I've thrown this 1988 Starting Lineup Fernando in the dupes box about a half dozen times. But as of right now, I think I need it. It makes things difficult when a bunch of oddball brands out at that time used the same exact mug shot of Valenzuela. 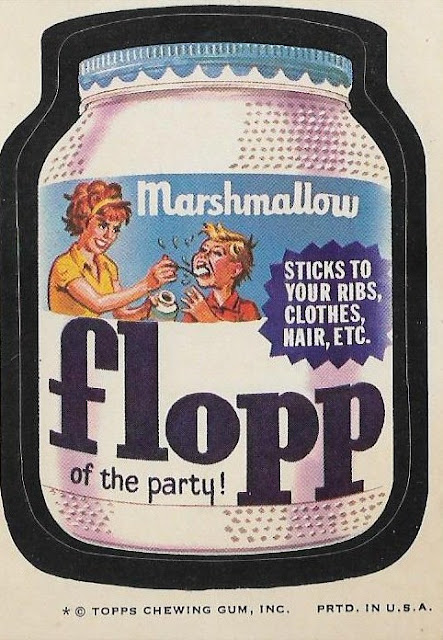 Finally, yes! The king of non-sports stickers! A vintage Wacky Package!
This comes from the 7th Series issued in 1974 and those '73 and '74 stickers sit in the heart of the time period when I was buying those, along with my '75 and '76 baseball cards (Wacky Packages had a longer shelf life).
The product WP is parodying -- Marshmallow Fluff -- also speaks to that time in my childhood.  As kids, we really wanted this stuff. I remember my mom buying it only once or twice and I wasn't really impressed with it once I tried it. But it was nice to see it in the kitchen cupboard!
I probably should land one of those Cey Archives Fan Favorites autographs on the occasion of his birthday next month just to get one from 1981 or 1982. I'm not crazy about the fact that they're encased, but I can just break out the little devil.
Thanks to all of those who feed my necessary need for Cey cards and my very unnecessary need for Cey autograph cards.

Brett Alan said…
I agree with the idea that once you have someone's autograph, that's all you need. Like you, I do make a distinction with autograph CARDS--that is, cards that come that way, as opposed to cards which are autographed after the fact. I've got 6 different certified autos of Steven Matz, for example, mostly because they come pretty cheap, and I'd be happy to buy more if the price is right. But then going and also getting his autograph in person isn't so appealing to me anymore, and I certainly wouldn't buy a non-certified auto of him, even if I knew for sure it was real.
January 5, 2021 at 9:23 PM

Nachos Grande said…
I don't really get into the whole TTM thing either. I do have a (long-term) project in mind that will use TTM signatures but I can't really even do that until I figure out how one goes about procuring proper addresses, etc.

Official autographed cards of Barry Larkin are cards I will continue to chase though!
January 5, 2021 at 9:57 PM

Nick Vossbrink said…
I'm definitely in the camp of once you have one you don't need any more (although I'll make an exception for getting an in person signature from someone who I've only gotten TTM or certified). That said I've totally re-sent to guys when I've found a special card (I like getting extra Mothers Cookies cards signed) or made a custom of them.
January 5, 2021 at 10:17 PM

Fuji said…
Wow. 21 is pretty impressive... especially for someone who casually chases them. I spent several years actively pursuing Rickey's signatures and I think I only have 21 too.
January 6, 2021 at 12:27 AM

shoeboxlegends said…
I've asked myself the same question, and arrived at much the same conclusion as you. For most players I'm content with one if any, but I'll make exceptions for favorites like you've done for Cey. I don't think I have as many as 21 of anybody though!
January 6, 2021 at 9:03 AM

Matt said…
The only athletes I have multiple autographs of are Jim Rice (card and helmet) and Luis Tiant (card and ball). I can't imagine having over 20 of one player.

My favorite childhood lunch was "fluffernutter" sandwiches (peanut butter and marshmallow fluff). Occasionally, I added chocolate chips to them.
January 6, 2021 at 9:36 AM

Mark K. said…
Your Ron Cey is my Mark Fidrych. I honestly don't know how many autos I have but know I don't have enough fingers and toes to count.You are not alone. I did have a question. The pic of the Dodger lamp also shows '75 cards framed. Is this a purchased card frame? I think I need something like this on my walls.
January 6, 2021 at 9:50 AM

Billy Kingsley said…
I'm a collector and hoarder. Nothing is ever enough. If I stop wanting to add more things to my collection, than there's no point in going forward...like a shark that is always swimming, I'm always looking to grow the collection.

With that said, I don't think I even hit double digits on any single person's autograph. I think 6 is my current top, and I pulled at least 4 of them...maybe all 6, I can't remember. Luckily, it's a player from my favorite NBA team and one of my favorite players on that team so I am not unhappy about it.

I have zero interest in IP autographs that I didn't get myself. I don't generally trust them to be real, unless a friend got them specifically for me, which has happened. I've only ever done one TTM successfully, and 1 unsuccessfully. It's just not my thing.
January 6, 2021 at 10:22 AM

cynicalbuddha said…
I caught the TTM bug years ago when The Lost Collector, AJ, came on the scene and showed off his Yankee's TTM project where he's gotten a different Yankees player TTM on every year of Topps from 1952 to present. I thought that would be neat if I could do that with the Brewers, especially considering I only had to start at 1971. I hit a milestone in 2019 or maybe early 2020 when I picked up the last year I need to complete my run from 1971 to 2000. But the desire comes and goes and with Covid I havne't sent any requests out in well over a year.

But being a team collector I'd welcome any Brewers auto into my collection and also being a player collector I'd take any auto featuring any of the players I collect regardless of team.

That being said as far as picking up or searching out autos I usually allow myself the indulgence of one new Yount auto a year for my collection.
January 6, 2021 at 11:11 AM

Zippy Zappy said…
As an extreme player collector I have a few autographs of my favorite player.
Not including duplicates I have 43 different Luis Torrens autographs (39 of which on cards with two on batting gloves, one on a ball and another on a 8x10). Oddly enough I never went nuts with getting Torrens to sign stuff for me too often during the few times I got to see him in person in 2014 and 2016, mainly because I was focusing more on getting stuff people almost never get signed like superfractors over 20 copies of the same base card. The rest are certifieds and I'm never going to turn any of those down if they're priced very cheaply.
January 6, 2021 at 11:22 AM

Michael Ott said…
I just bought one (no cert., TTM) from an eBay seller who had plenty! Needed the card for my set, the autograph looked great and didn't bump the price much. If you ever get the itch, I'm pretty sure those early 80s ones you mention are available.
January 7, 2021 at 3:53 PM

cardboardhogs said…
i kinda miss the TTM thing, but really haven't done it since the late 80's.