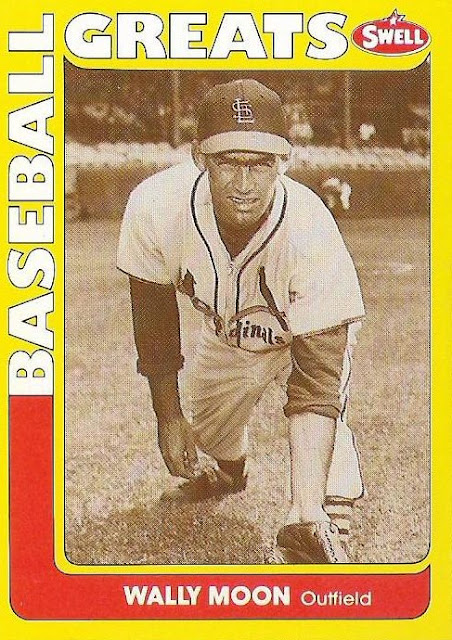 I'm probably about the last blogger to get around to the holiday Pick Pocket goodies I snared from Julie at A Cracked Bat. So I best get to it.
Most of what I want from the Pick Pocket offerings are Dodgers, of course, but also cards that feature players from my younger days or players from the '50s and '60s. So that usually means oddballs or retro cards.
Julie has a lot of those and these are popular with some other bloggers, particularly Bo, who is way quicker on the draw with these cards than I am. But I managed to find a few and I thought I'd play a game with them that I am calling "Want List Worthy."
The best cards often mean I like them so much that I want to complete the set that contains that card. And before I know it, I'm creating a want list for the set.
So let's see which of these cards from Julie are from sets that are Want List Worthy: 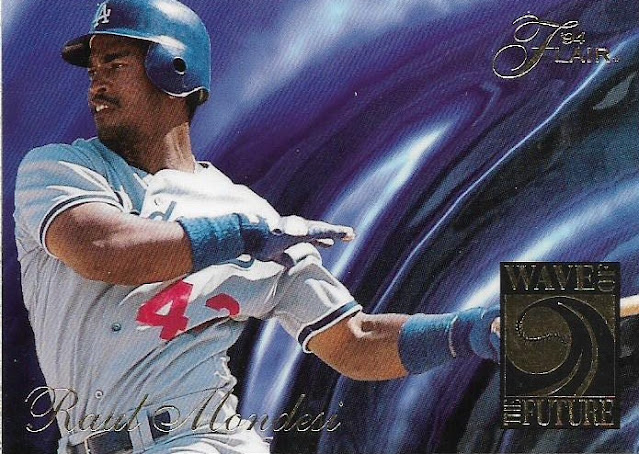 Raul Mondesi, 1994 Flair, Wave of the Future insert
Chances of making a want list: 0%
The main reason I wanted this card is because it's a Dodger card I didn't have. I was surprised that there was another Dodger in a 10-card insert set as I've owned the Chan Ho Park for quite awhile. But, no, I don't want to complete a 10-card set that includes James Mouton, Mark Acre and Kurt Abbott. 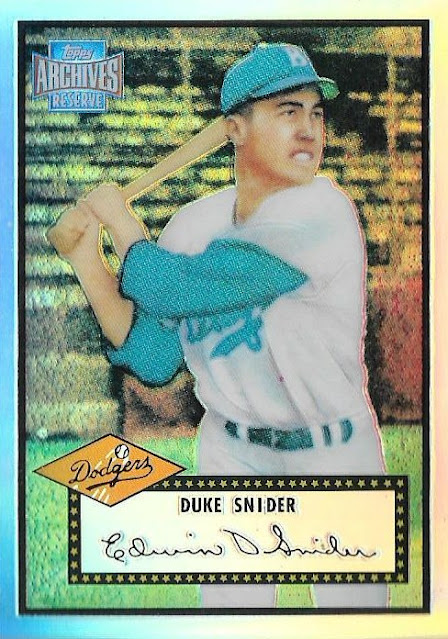 Duke Snider, 2002 Topps Archives Reserve
Chance of making a want list: 3%
Again, I wanted this simply because it's a Dodger need. I've never understood the fascination with the early 2000s version of the Archives brand. They're basically just reprints of earlier cards. I get the appeal of reprinting cards you'll probably never see in your collection, such as this '52 Snider replica. But not some of the later sets that were repeated. Plus, we're well into reprint overkill these days (and we weren't in 2002, so that's probably why they had appeal then). 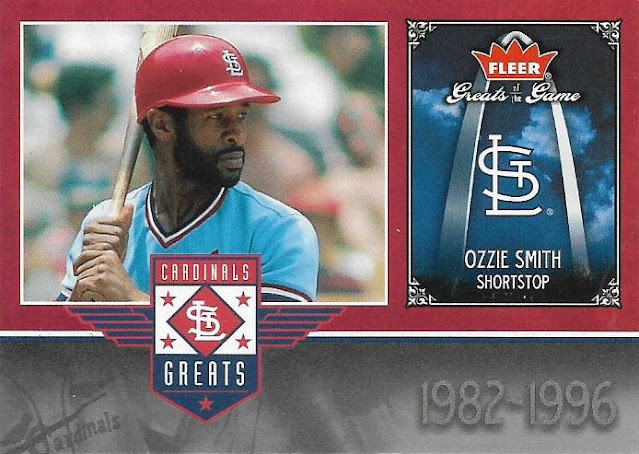 Ozzie Smith, 2006 Fleer Greats of the Game, Cardinals Greats
Chances of making a want list: 5%
I do like this set a lot and it's filled with players who I watched as a kid. That's why I pick up a card or two every time they are up for grabs. But it's difficult for me to get excited about a set issued in 2006 enough to complete it. 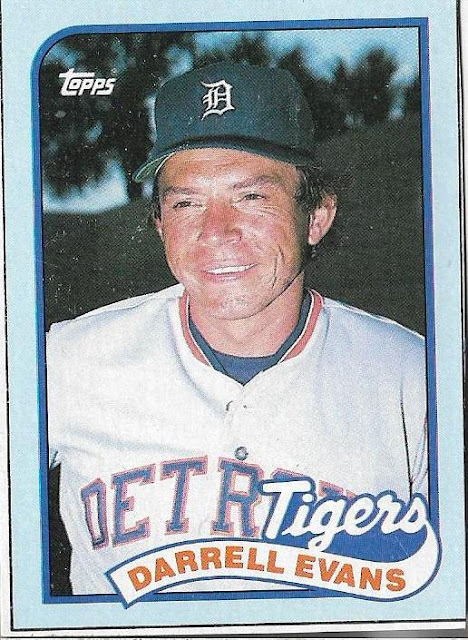 Darrell Evans, 1989 Topps box bottoms
Chances of making a want list: 50%
I should post a want list right now. What's it, like 16 cards?
These are the cards that I discovered on the bottom of the boxes of 1989 Topps we sold at the CVS I worked that year. I used to take empty boxes back to the stock room to feed to the trash compactor. But this particular box was the holy grail with EXTRA baseball cards on the bottom! I squirreled those away to take home.
But I didn't spot all of the cards so I still need more than half the set. The Darrell Evans is a particular find because Topps didn't create a regular Darrell Evans card in the base set.
That was a pretty big gaffe because Evans hit 22 home runs in 144 games for the Tigers in 1988. Sure, he batted only .208 and the Tigers announced after the season that they were not going to retain him. But is that a reason to leave him out of the set? It's not like Evans announced his retirement.
I guess Topps sort of saved face with the box bottom card, which mentions him hitting his 400th home run in 1988. Then, it added Evans to the '89 Traded set when he signed with Atlanta for the 1989 season. 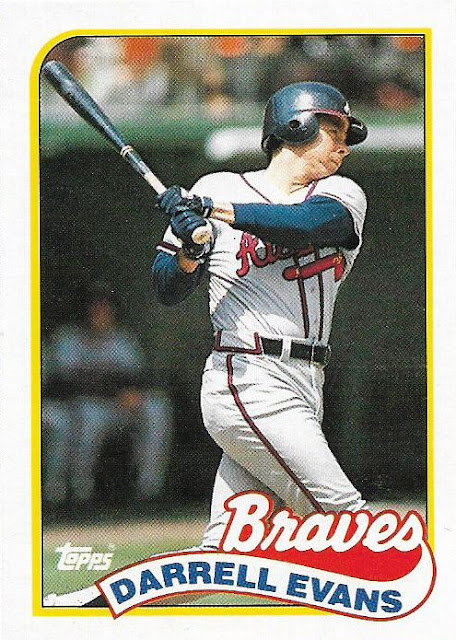 They didn't get the back right though. 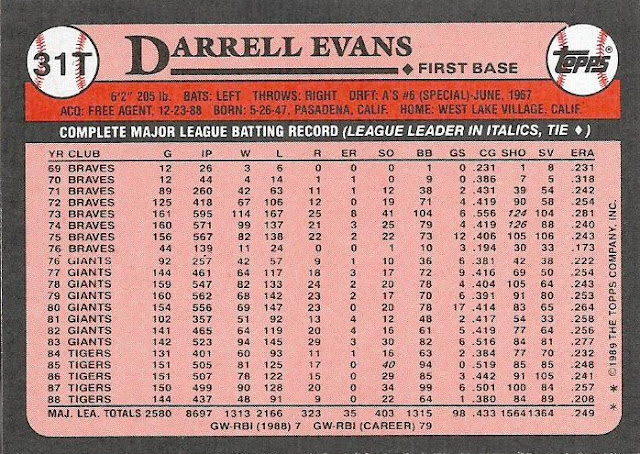 The career stats think that Evans is a pitcher. 126 shutouts in 1974. I certainly hope he led the league! 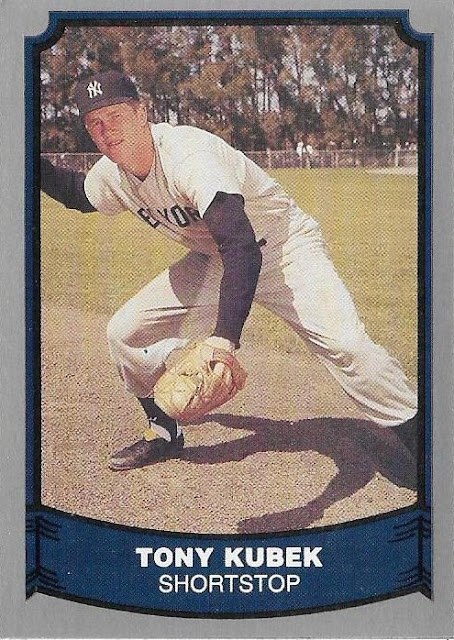 Tony Kubek, 1988 Pacific
Chances of making a want list: 50%
Weirdly, this is my first card of Kubek. You would think someone so well-known and known for playing with the Yankees would have a lot more cards.
I like the subject matter of the late '80s/early '90s Pacific Legends sets. I'm not crazy about the design, which is why I'm not as tempted to complete it as I am something like this: 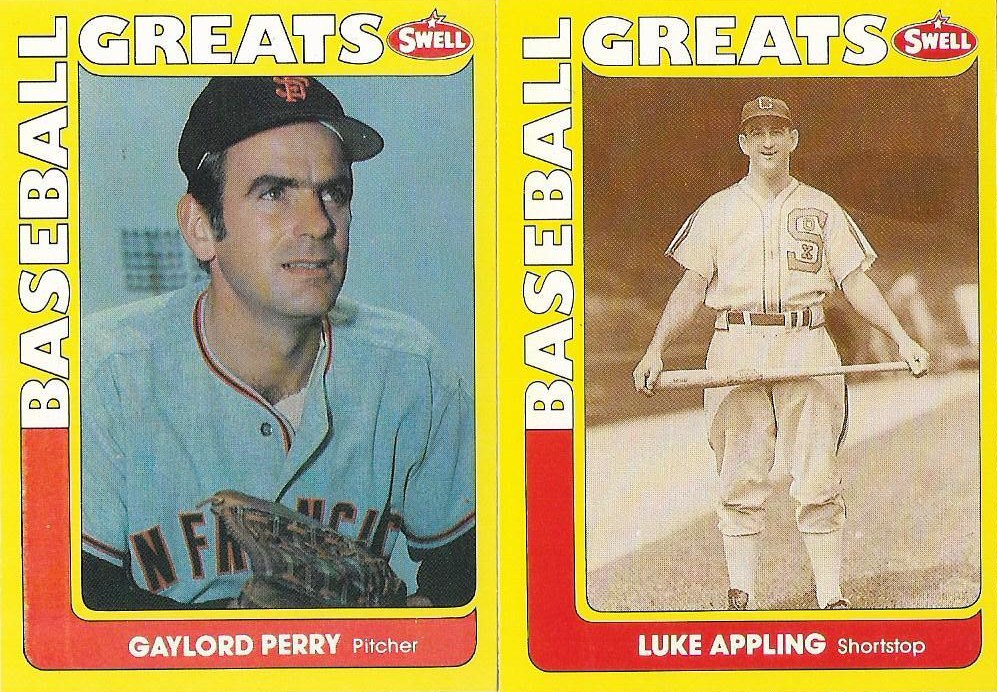 Luke Appling and Gaylord Perry (and Wally Moon up at the top), 1991 Swell
Chances of making a want list: 60%
Swell is the greatest food issue set of its time. Not only is the subject matter practically unmatched, but the look of the cards is terrific. The 1989, 1990 and 1991 Swell sets are all worth want lists as far as I'm concerned. 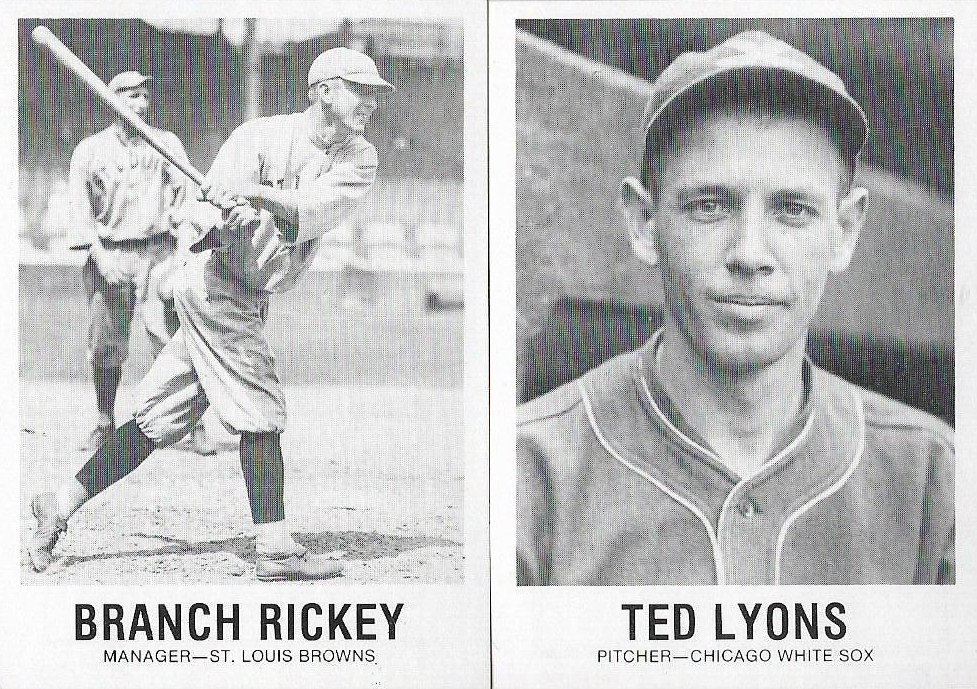 Branch Rickey and Ted Lyons, 1977-84 Renata Galasso TCMA
Chances of making a want list: It's already there
I finished off the first series of the Galasso "Glossy Greats" last year. That portion of the set is my absolute favorite. But the set continued for another seven years, long past the time I was seeing advertisements for it in Baseball Digest.
Both of the above cards, which were issued in 1980, I can mark off my want list. Weeeeee! 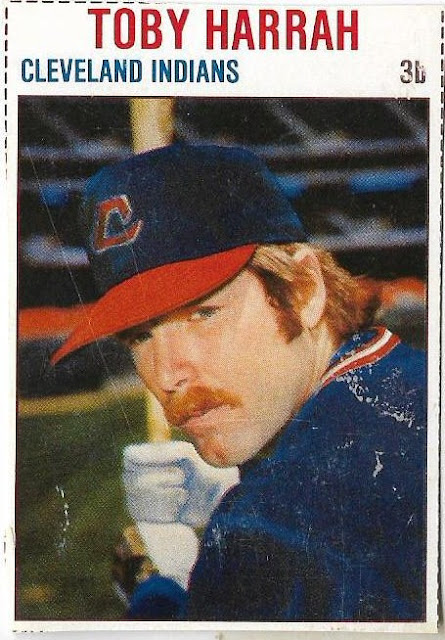 Toby Harrah, 1979 Hostess
Chances of making a want list: 85%
All of the Hostess sets from the 1970s will eventually appear on my site in want list form. I need to get off my butt and start adding cards from the one Hostess want list already there: 1976.
I tend to forget about the '79 Hostess set. But it's just as great as the others. You really get to see some obvious airbrushing excellence in Hostess sets and this is an example. 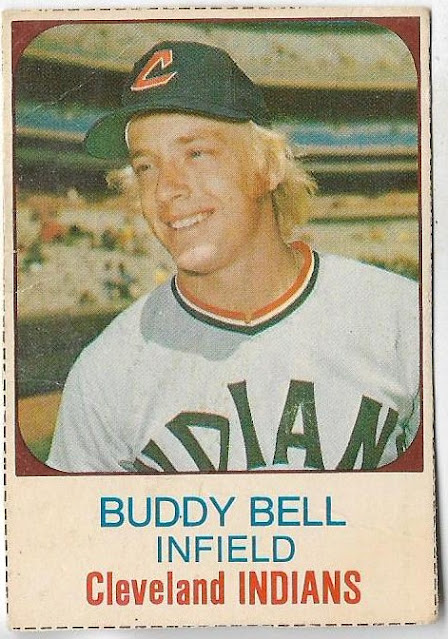 Buddy Bell, 1975 Hostess
Chances of making a want list: 90%
The Hostess sets from 1975-77 are right in my wheelhouse. I should get that '75 want list up in the next several weeks. I've got a respectable amount already.
One thing I like about '70s Hostess cards is I don't have to be too fussy over condition because you almost never get a "perfect" '70s Hostess card. Between the staining and the cutting with kid scissors, condition is all over the place.
As long as they don't look like the cards soaked in twinkie grease for 40 years or were trimmed by a budding psychopath, it's good for my collection. 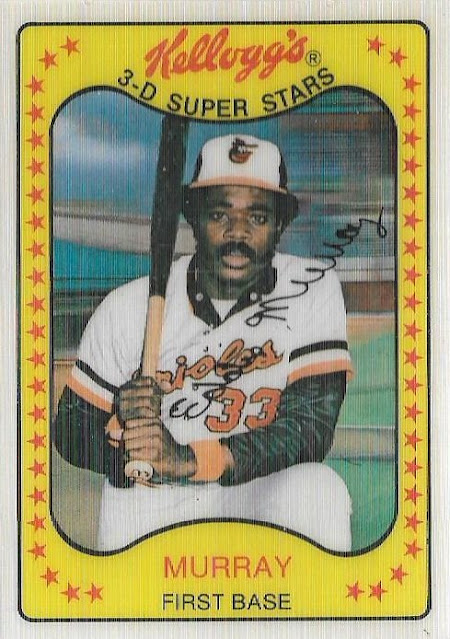 Eddie Murray, 1981 Kellogg's
Chances of making a want list: 70%
Oh, a want list will get there, eventually. Out of all the Kellogg's sets from 1970-83, the 1981 is the least appealing to me.
It's still Kellogg's so I definitely still want the cards, but the larger width combined with all that YELLOW kills the excitement a bit. Figures, a set the least susceptible to cracks would be the one that doesn't hold my interest as much. 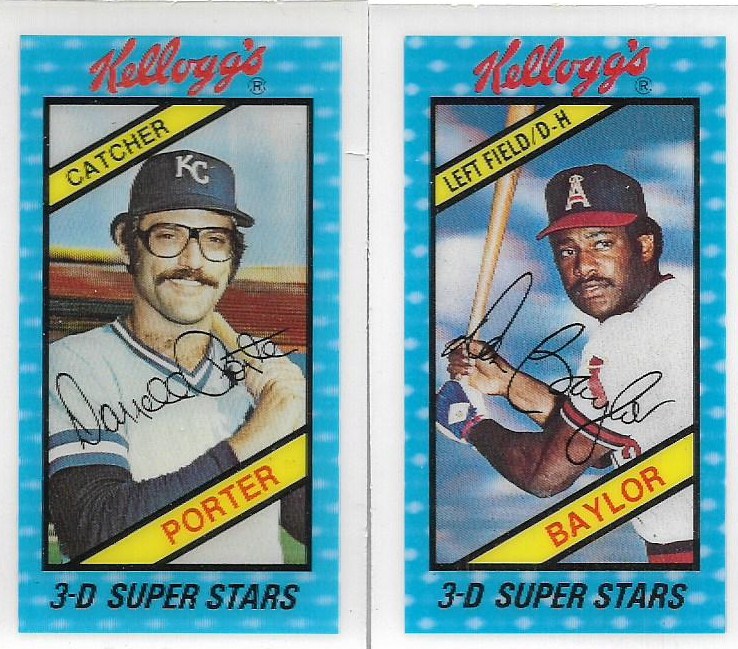 Darrell Porter and Don Baylor, 1980 Kellogg's
Chances of making a want list: 100%
As soon as I complete the 1978 Kellogg's set, which I should do within the next six months, expect to see a want list for 1980 Kellogg's. Once I'm done with the '78 set, I'll probably start on the 1975 Kellogg's set. I'll need a less-difficult completion quest to balance out the difficulty of the '75 set. That's where 1980 Kellogg's comes in.
The '80 Kellogg's set is my favorite of the later Kellogg's sets (1979-83). It's the tiniest of Kellogg's sets, but it's the perfect size (and no, I didn't feel like I was getting ripped off when I was pulling them out of cereal boxes). I like the look a lot.
So, for the most part, you can see I like these cards very much because many of them have want list potential.
I also claimed a couple of cards that are for fellow traders so I won't be showing those.
Thanks, as always, for the chance, Julie.

Jeremya1um said…
That is the reason why I loved the ‘01 Archives set. I was 17 in 2001, and probably 60% of the card designs showcased on the set were new to me, and it was nice having copies of cards that I will probably never own. ‘02 was kind of a letdown since it wasn’t rookie cards, and ‘03-‘05 were just a fun product with fan favorites, autographs, and no reprints. Wish it would go back to the ‘03-‘05 version instead of what it is now.
I bet that ‘94 Wave of the Future card was hot in 1994. Pretty sure that insert set was really popular back then, and I remember Mondesi being on the hot lists during his ROY season ( as well as Park).
January 15, 2021 at 8:04 PM

Nick said…
Some great Pick Pockets there! Those Swell definitely live up to the brand name.

I love 2001 Archives because it's the first time I personally saw a lot of the cards that would later become staples of my vintage collection. I was a kid when that set came out, and didn't even have a clear indication of what vintage was at the time. It's also the set I credit with introducing me to the allure of sunset cards, since a lot of the reprints feature less-famous final cards (which is refreshing after seeing the '52 Mantle reprinted 100 times).
January 15, 2021 at 10:40 PM

bryan was here said…
Some nice pickups there. I especially love that '79 Hostess Toby Harrah. I've had that card since his Indians days in the early '80s. Always loved the velvet jacket and triangle C that he never wore as an Indian. What's funny is that there are Buddy Bell cards with the Indians where he is wearing the block C they wore form '78-85. The Harrah goes into the same category with the '76 Topps Traded White Sox cards (Garr, Spencer, Carroll) where they're airbrushed into an old style uniform worn before said player joined that team.
January 15, 2021 at 11:37 PM

Mark Hoyle said…
Over the last few yrs I went back and grabbed all the Swell, Pacific, Galasso sets complete . You can find them fairly cheap.
January 16, 2021 at 8:50 AM

Nick Vossbrink said…
Nice pickups with lots of Hosetss and Kelloggs. Don't feel bad about being so late posting, I haven't even recieved mine yet. USPS must have eaten it somewhere.
January 16, 2021 at 9:09 AM

Shlabotnik Report said…
Well, now I know who got to some of these Hostess and Kellogg's cards before I did. :-)

I'm surprised I didn't know that about the Darrell Evans box card. I'll have to remember tha if/when I finally decide on whether to complete the 1989 Topps set.
January 16, 2021 at 12:37 PM

Adam said…
Don’t feel bad, I haven’t posted about the cards I picked from Julie either yet. Nice picking though!
January 16, 2021 at 5:51 PM