I feel a bit foolish.

I ended up remembering what I forgot to get at Walmart the last time. It was some envelopes for work to mail off some plaques.

So, even though I wanted to avoid buying anything off card shelves for the rest of the month, I felt obligated to stop by the card aisle. Besides, Archives will likely make an appearance near me before the month is out and how will I be able to resist sampling something that contains the '75 design? You ARE expecting an exhaustive break down of Topps' inability to replicate that design aren't you? I'd be disappointed in you if you didn't. I'd be disappointed in me if I didn't.

So, obviously, no Archives yet. We can't all run over to the hobby shop in Alaska.

My closest Walmart did contain Chrome and Heritage High Numbers, formerly the latest-and-greatest cards on shelves. I turned down Chrome flat. Ever since Chrome scrapped its borders it has lost all of its irresistibility. I am immune to its charms.

So, with only one option left, and to control costs, I grabbed a single rack pack of Heritage High Numbers.

This was what was in the pack: 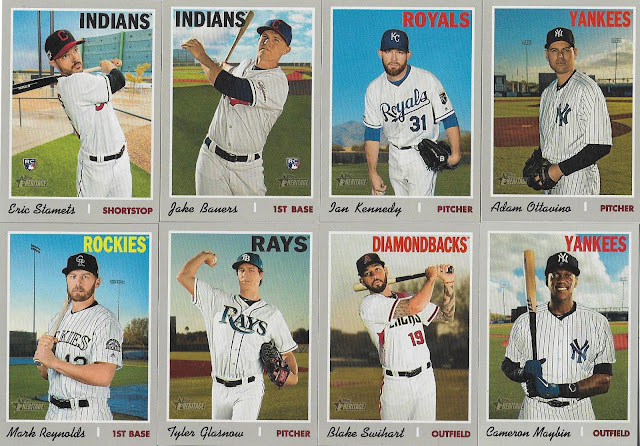 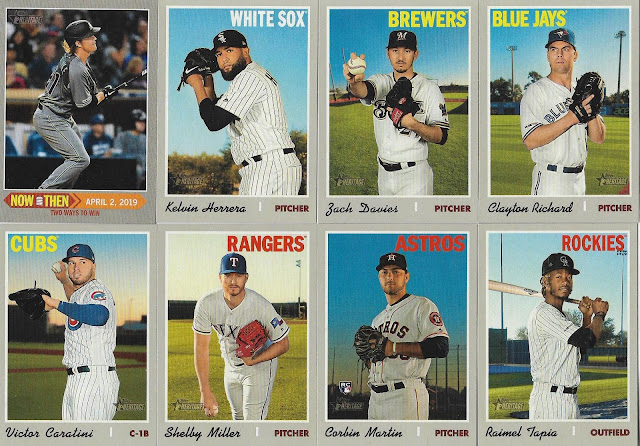 Are you as bored by this as I am?

I couldn't scan the cards individually because it's much too dull for that.

This has all the signs of the dullest pack of the year: a design that just doesn't interest me that much (even though the original '70 set has grown on me), players I don't know, and a whole host of teams that could disappear tomorrow with me barely noticing. Not only are there no Dodgers, but I think I've officially set a personal record for pulling Diamondbacks this year and the lone Diamondbacks collector I know doesn't seem to be collecting them anymore.

So, I don't really feel like I shouldn't have bought the pack or anything like that, that I've been taught a lesson, or that I should have saved my money to buy something I really want and then lord it over people who have bought blasters recently. But I do feel a little bit foolish for grabbing this instead of another pack of A&G.

And I also feel foolish for risking the chance of pulling a Dodgers dupe since Buckstore Cards has promised me the majority of the Dodgers.

But I did buy what I wanted when I wanted at the time I wanted. And that can't be stressed enough.

And that's all I have to say about that.

bbcardz said…
I like 2019 Topps Heritage (despite the lack of team cards, manager cards and checklist cards). But that particular pack was pretty uninspiring, to put it mildly. I think there's a couple of former All-Stars in there but no big-name superstars. If you're lucky, one of those rookies will turn out to be a HOFer (or not).
August 24, 2019 at 6:05 AM

Fuji said…
These are dull, but I can't wait to see some of these cloth stickers advertised on the packaging.
August 24, 2019 at 9:27 AM

gregory said…
(1) Sixteen cards used to be a normal pack, not a super value amazing pack.
(2) I've heard of four of those players.