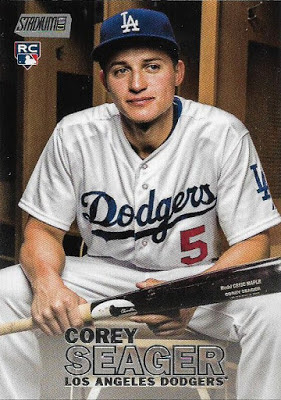 I just got back from a quick jaunt to my folks' house to continue with the never-ending clearing out process. What a project.

When I returned and walked through the door this afternoon, the mail from the last two days was sitting on the computer desk. It contained two pieces of junk mail and five -- five! -- envelopes containing cards.

For a moment I was transported to 2010 when that kind of card bounty was a semi-regular occurrence. To what did I owe the cardboard pleasure?

Back in those days, I was so buried in cards from others that sometimes I had to feature more than one card package in the same post. I haven't done that for a long time. But I'm doing it here now. Because my brain is a bit fried from a long drive.

This will be quick though. I'm showing only three of them and two of the envelopes contained just one card and the other contained two. Each, however, is quite interesting in its own right. 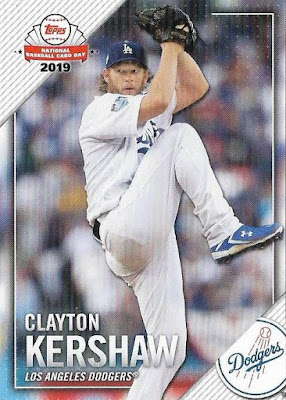 The first card arrived from Peter of Baseball Every Night and it's a card from the recently celebrated National Baseball Card Day.

I didn't get a chance to partake in National Baseball Card Day. I never do. It's always on a Saturday when I'm usually busy with work. It also usually takes place only at participating card shops, which don't exist around here, participatory or not. Also, Topps added a feature where collectors without card shops could go to Target or Walmart for a special something (I don't remember what) on NBCD. But I cannot stress enough how much I detest being in a Target or Walmart on a Saturday, free, new cardboard or not.

So this was the quite opportune send by Peter!

I can't get over how nice the NBCD cards are this year. They don't merely repeat the year's flagship design (previous years had unique designs, too, but this seems a bit more distinctive) and the photo is different and everything. Nice work. 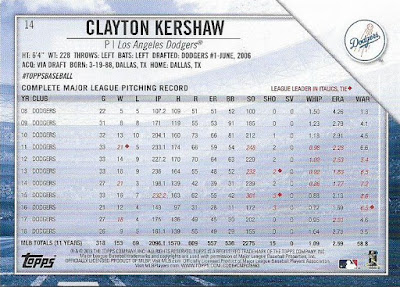 There's even a completely new-look back with full stats that make me feel like I'm looking at the back of Jim Kaat's card in 1982 (geez, has Kershaw really pitched that long?). 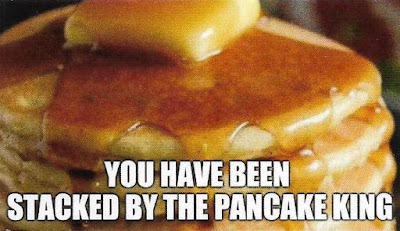 All right, next envelope.

It came from The Pancake King. Mercy! I've been stacked!

A few weeks ago or so, it was a mystery about who was sending these stackings and referencing pancakes. I wasn't stumped though. I knew it was Wes. It had all of the signs. Wild generosity. Food-related humor.

The pancake's out of the bag -- or something -- now as Wes has revealed himself as the great pancake king, determined to send cards out to anyone he can. I picture someone with sticky syrup hands sealing the envelope.

Here are the two cards from this actually unsticky envelope: 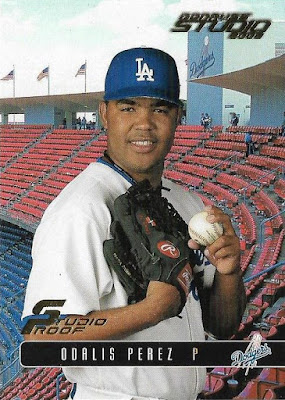 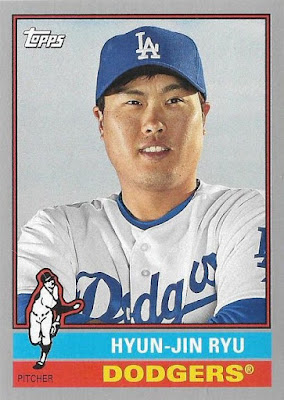 Both of these are numbered and both are things I never didn't know existed or forgot existed.

The Ryu card is from Archives from 2015. It's numbered to /199. Ryu's having an unreal season and that's all it takes for me to be a lot more appreciative of a Hyun-Jin Ryu card now than I was in 2016.

Thanks, oh king of pancakes. 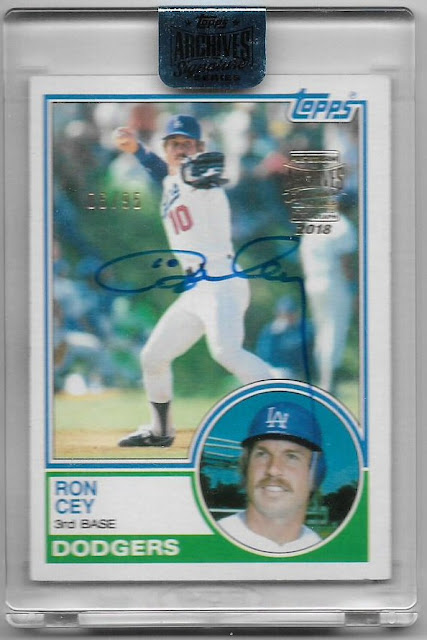 You've seen this card on my blog before. Well, not exactly this card, but you know what I mean.

It was sent to me for my birthday. Here it is now: 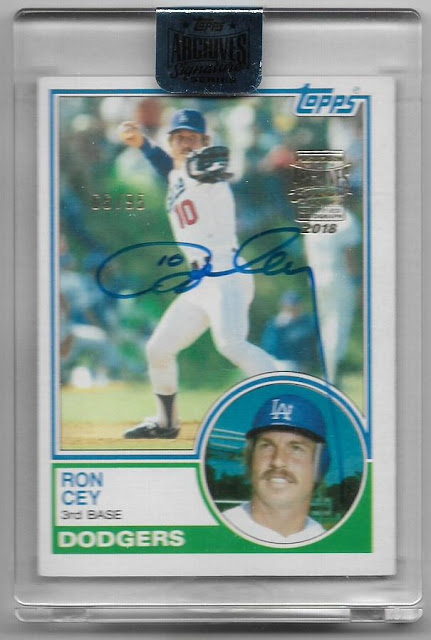 Both of these are 1983 Topps cards signed by Ron Cey and encased as part of the 2018 Topps Archives Signature Series set.

The latest one came from Jim, also known as mr haverkamp. He found it in a cheapie box at The National. I'm not sure how I feel about that. I'm happy to get a card from The 2019 National -- my first one -- but what is a signed card of Ron Cey doing in the cheapie box??

Anyway, the card Jim sent is numbered 6/95 and the one I received last month is numbered 66/95 and now I probably should get all the Cey 2018 Archives that have 6 in the number.

I know I asked for this although I was referring to the 2017 Archives edition. But no matter, I'm certainly not complaining. If someone is going to toss this in the discount box, by all means, send them to me. I will take all 95 of them.

So there you go, three interesting envelopes that greeted me as I walked in the door.

Henry Blanchette said…
While I appreciate the idea of having Target and Walmart participate in NBCD, I doubt most of those stores will stock the shelves with the exclusive cards on the actual event day.
August 14, 2019 at 8:41 PM

Brett Alan said…
They don’t—it’s a different promotion. Wal-Mart has blasters with Gallery preview cards and Target has a coupon for a free pack when you spend 10 bucks. And NO will be happy to know that the deals are good all week, so no need to go on a Saturday. In fact I think I’ll try the Target coupon today!
August 15, 2019 at 9:08 AM

Fuji said…
When I visited my dad two weeks ago, he brought up the idea of downsizing and he mentioned that he didn't want to leave me and my siblings with a bunch of stuff to get rid of. I told him it's his stuff, so he should do whatever brings him the most happiness. But after reading the first sentence of this post, I'm starting to think that maybe I should downsize myself to prevent my family from having to either try to sell my collection or worse... simply throw it away.
August 16, 2019 at 11:49 AM

arpsmith said…
My wife just got finished cleaning out her mom's place, her mom passed away in March. We are in Kansas, she was in CA so it was 3 different flights out west. Luckily she had helped her mom downsize from a 3000 sq ft home about 10 years ago to a 1200 sq ft condo so it could have been tougher. I visited my mom a few weeks back and all I could think about was how challenging it was going to be to clear out her place - felt bad that my mind went there but it did. I know it isn't easy, good luck getting through it.
August 16, 2019 at 10:49 PM