August 20, 2019
(Stage 2 of the creation of my card room has begun. A second set of shelves has been purchased and erected for my Dodgers binders. With that, there will be some reorganizing of stuff on the wall and possibly moving the card desk around. Then I'll get the remaining binders off the floor and onto shelves and then it's on to Stage 3 -- wall stuff! But now it's time for Cardboard Appreciation. This is the 284th in a series): 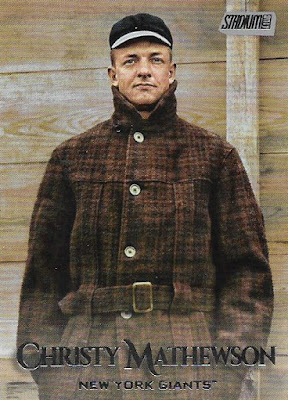 First reaction: he pitched in that?

More on that in a minute. But I wanted to mention that I've noticed a handful of new legends in Topps products this year.

Most of this is merely the return of retired players who already appeared regularly on Topps cards a decade ago. Mathewson and Pee Wee Reese (still need that wonderful Stadium Club card of Reese) were regulars in Topps products in 2010 and 2011. 2019 has also marked the return of cards for Rogers Hornsby and Mel Ott, who were each regulars back in 2011.

The only legends newbies that I can find in my collection are Sammy Sosa, who appears to only have had an Archives card in 2014 since retirement (I'm referring only to Topps here); Tino Martinez, who hasn't shown up post-playing days since 2006; and Casey Stengel, who hasn't been in a Topps product since 2002! So the 2019 Stengel card is well-deserved and I'm glad I have one (from Allen & Ginter).

I think I might make this a regular practice -- charting the legends featured each year -- it would be interesting to see who moves in and who moves out.

Overall it's basically the same old players over and over. I suppose Ruth, Aaron, Clemente, etc., aren't ever going anywhere. And Topps will probably hold on to Derek Jeter forever, too. But Willie Mays hasn't shown up since 2016 and meanwhile, legends (*cough*) Luis Gonzalez and A.J. Burnett are weirdly popping up and I find that fascinating.

So if I don't forget, expect a report here at some point.

Anyway, the Mathewson card is striking. Obviously it's been colorized. Mathewson didn't pitch in a world of color photography. The image appears to be from 1911. A photo of him wearing the same sweater was taken during spring training in March, 1911 in Marlin Springs, Texas.

This explains things for the Stadium Club shot quite a bit. It must have been a cold day in Marlin Springs, which is south of Dallas, near Waco, for Mathewson to wear his collar all the way up. Here is the shot that Topps used for the card.

I'm going to assume Mathewson did not wear that while playing.

Those sweaters were the style back then, the forerunner to the jacket and, now, the hoodie. Here's another shot: 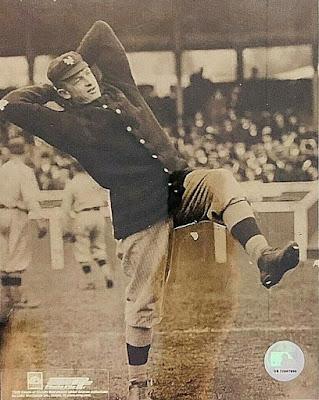 For the first decade of the 1900s, there was probably no other player better than Mathewson except for Honus Wagner and Cy Young. I don't seem to hear as much about Mathewson as I do those other early 1900s players like the ones I mentioned above and Hall of Famers like Ty Cobb and Walter Johnson.

Yeah, this is a Dodger fan saying I think he should get a little more credit, if only for the sweater.

Brett Alan said…
Mays seems to have a couple online-only Topps cards this year. Is it possible Topps has the rights to use him in online sets but not packs? Really weird, but I can’t imagine that they wouldn’t have put him in the “Greatest Players” insert set if they could have.
August 20, 2019 at 10:42 PM

Nick Vossbrink said…
So on the topic of baseball sweaters I have to dredge up Meredith Wills's blog since it's all kinds of awesome and even though she's now doing great stuff with the changes MLB is doing to the baseball I really love this deep forensic look at how these century-old garments were constructed. http://hofknitter.blogspot.com
August 21, 2019 at 1:51 AM

EbeSPN said…
Any of the cards of that era interest me, especially when they use a new photo or like they did for the 2009 Topps Updates series with Cy Young with the Boston Rustlers, Honus Wagner with the Louisville Colonels, Mathewson with the Reds, Ty Cobb with the A's and Babe Ruth with the Braves.
August 21, 2019 at 10:51 AM

GCA said…
You like baseball sweaters? Here's Christy and the whole 1909 team from my framed photo:
https://a84e725c-a-62cb3a1a-s-sites.googlegroups.com/site/cardwantlists/home/t205-giants/My%201909%20Giants%20sm.jpg?attachauth=ANoY7crLCuEn4ArjRL0zyK5C8RHf4ofy-T26Cs5-oe7evXPgeZvLIfpLpjhK2b-s0Joqu_tqxZwYyUhMEUumomn3nYHU8fwe28S98sef1v2BGkSepN65BOY0rcqBwmFTiOPRKkAGBw_rXNzJba8d7X7y2NEYQ3JHu62wopzIpsk0vnFp97PPr2ZKivnza1zg3IC0XgZL32n2mHURuxly2V2Hd_wyM2iFXt9XZIg4ETC3OVZQCN65XtXcWJ820cJQhOBhd1lma-9r&attredirects=0
August 21, 2019 at 3:04 PM