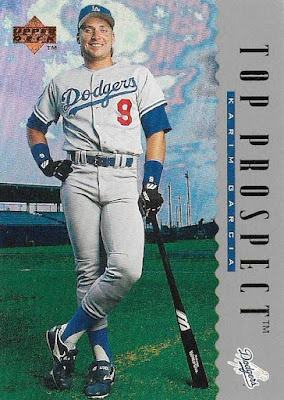 I have been cataloging cards in my collection for as long as I have been writing this blog. It seems like I'll never get to the end but the goal is to someday reach the finish line.

Once I have totaled all of my cards, there are several posts waiting to be made. One of the ones I've always wanted to write is figuring out which player in my collection has the greatest disparity between total cards and games played.

In other words, way more cards than games played.

I have a hunch who that is.

Garcia was a big prospect for L.A. in the mid-1990s. But he ended up playing in just 29 games for the Dodgers between 1995-97. Even though he was called up to the major leagues as an 18-year-old in 1995, he managed just a single home run for the Dodgers total and hit just .150. Not even his number of plate appearances with the Dodgers -- 67 -- can equal the total number of Dodger cards of him that are in my collection.

Ninety-four cards of a dude who played in just 29 games for L.A. (I know this can be expressed in the form of a handy ratio or percentage, but I've just returned from another exhausting trip to my folks and am in no mood to calculate math). That's pretty ridiculous and sums up the 1990s card world quite aptly.

Garcia would go on to make a name for himself with the Diamondbacks (as a starter in the very first Arizona lineup), the Tigers, Indians and the Yankees (possibly known more for fighting groundskeepers and pizza delivery guys than anything else).

But I will remember him as potentially the guy with the biggest disparity between the number of Dodger cards and Dodger games played. 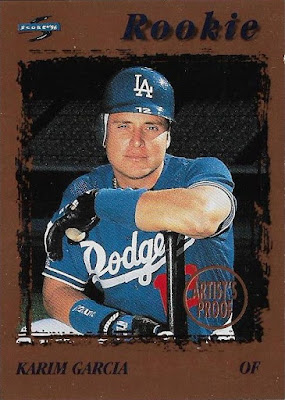 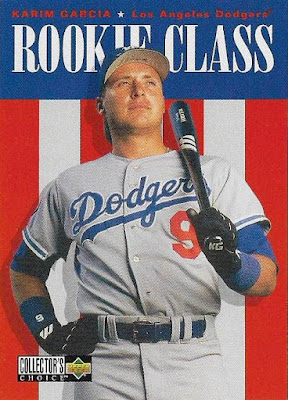 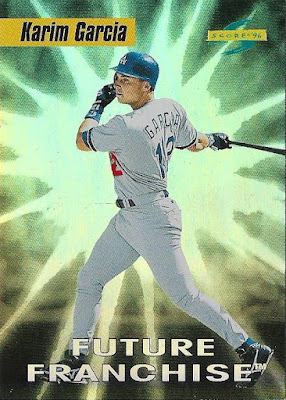 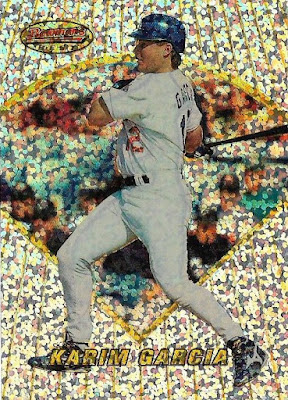 And some pretty fancy cards for those 29 games.

Jeremya1um said…
I always thought Garcia would hit 40 HRs in a season. He never did, but I still collect him and am glad he has so many cards. I kind of thought it would be Piazza or Kershaw with the astronomical amount of cards they get every year between base cards and parallels and inserts and parallels of inserts and such.
May 7, 2019 at 7:55 PM

Nick said…
I've wondered about this kind of thing as well. I too collect Karim Garcia for some reason, and noticed that he had a lot of cards as a Dodger despite only playing in a handful of games for them. Another good one I can think of is Jack Cust (another kinda obscure dude I collect) -- I own about 30 of his Diamondbacks cards even though he appeared in just three games in Arizona.

Depending on how you look at it, the golden boy could be Josh Hamilton: I have right around 50 cards of him with the Devil Rays and he ended up playing exactly zero games for them!
May 7, 2019 at 8:57 PM

This is an interesting idea though. Off the top of my head, I'm not sure who the Reds' representative would be on the "overproduced" list. Mike Cameron and Ron Gant both are options, though both played before the plague of parallels in the baseball world took over which might limit the number of cards that I own of each them.
May 7, 2019 at 9:52 PM

Fuji said…
My brain hurts. This post inspired me to think of the Oakland Athletic with the biggest disparity. After at least five minutes of flipping through scans... I gave up. Great post though.
May 8, 2019 at 12:17 AM

Jongudmund said…
This is an interesting train of thought. It's like finding MLB rookie prospect cards of someone who never made it out of AAA. I've got a few of those "prospects" who are probably now retired.
May 8, 2019 at 8:48 AM

Billy Kingsley said…
I never even thought about this concept. Cool! It immediately brings to mind an NBA player, who despite having a guaranteed three year contract, played in zero games...but has at least 30 cards in my collection. I might have to steal your idea.
May 8, 2019 at 10:01 AM

PK Steinberg said…
That's a pretty interesting thing to track, games played versus number of cards issued.
May 8, 2019 at 1:09 PM