May 21, 2019
(Today is National Waiters and Waitresses Day. One of my favorite things to do is eat at a restaurant and I have great respect for table-servers, and from the time I was a bus boy have tried to tip them more than what is standard. They know the value of work. Time for Cardboad Appreciation. This is the 282nd in a series): 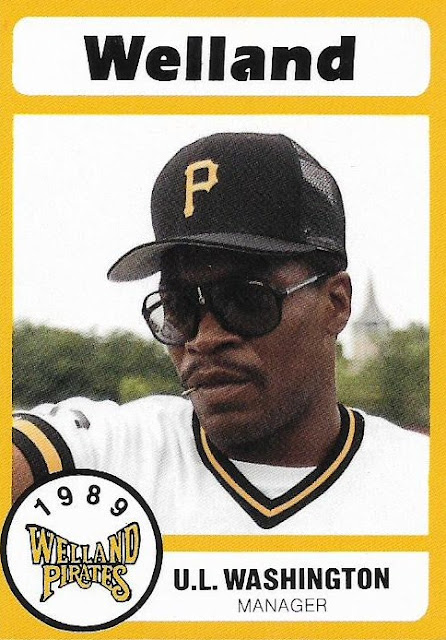 This is one more card from my COMC Spring Cleaning shopping spree and it is probably my favorite out of all of them.

I didn't know it existed until it popped up in an unrelated search. I am familiar with the '89 Bill Pucko Cards and the design from that year. But all of my knowledge came from the Niagara Falls Rapids team set from that same year and those cards feature red borders.

This was the most notable card from that set, according to me: 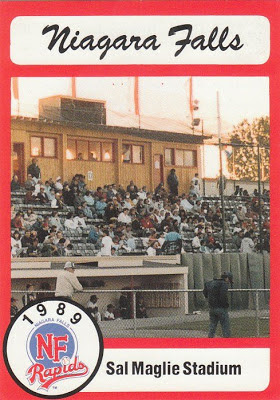 This is the card where I make my trading card debut. I'm the guy in the press box, fourth window from the left, talking to the scorekeeper in the fifth window.

I kept all of the cards in that Rapids team set as it commemorates the first professional baseball team I covered for a season. The Rapids were a new team that year in the New York-Penn League and for their first home-opener, they played another new team, the Welland Pirates.

Those were the same Welland Pirates managed by U.L. Washington.

Washington is the first major league player I ever interviewed. It came at the end of that home-opening game at Sal Maglie Stadium. Washington was displaying his famous toothpick during the interview just as he is in the Welland card, which is tremendous.

That is exactly as I remember Washington when he talked to me.

As I mentioned in this post, I grew up watching Washington play for the Kansas City Royals. He was a favorite, as he was for most kids growing up then because of that crazy toothpick. I've enjoyed every U.L. Washington card that has entered my collection. But none of them truly represented the time when I talked to him.

I didn't think such a card existed until I came across that Bill Pucko card.

(P.S.: There are also '89 Pucko cards for the Elmira Pioneers and Utica Blue Sox. Perhaps the most notable '89 Pucko card is of future pitcher Tim Wakefield as a Welland Pirate third baseman).

Jeremya1um said…
If I get that Stadium card and send it to you, will you sign it?? I’ve always wanted to be on a real card. I’ve made a Topps custom before with some guys on an autograph site, but I want to be on a real pack-pulled card. Congrats on getting on one, and also for your recent article getting published in Beckett.
May 21, 2019 at 8:14 PM

DMA said…
Great post. I have the final game of the 1980 World Series on DVD, and when U L Washington comes up, the announcers tell kids watching at home not to try to imitate him with his toothpick.
May 21, 2019 at 10:36 PM

Don said…
Great post. I remember a U.L Washington story where did not have his toothpick one year. He did it so kids would not imitate him. Ended up having the worst year of his career to date. He was never without his toothpick after that.
May 21, 2019 at 10:51 PM

Mike the History Teacher said…
I really like stadium cards, especially minor-league ones.

Sometimes when I look at a card that has fans, reporters, or other non-players in the background, I wonder if they know they've been immortalized on cardboard.
May 22, 2019 at 12:04 AM

Fuji said…
Demand for that Sal Maglie Stadium card just went up big time. As an autograph collector... I'll be joining Jeremy on the hunt for this single, so I can send a TTM to you.
May 22, 2019 at 12:42 AM