Almost always on my side 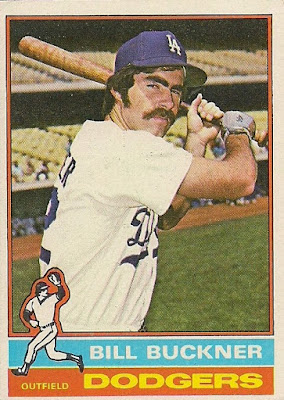 There are baseball players throughout one person's career as a fan who always seem to be fighting for the right side.

No matter how many times they switch teams (well, maybe this isn't the case if a player has worn 7 different MLB uniforms), they seem to land on the side of good. Unfortunately for Bill Buckner, I haven't exactly rooted for teams who are both "good" and "successful."

Buckner, who died yesterday at age 69, came up with my favorite team, the Dodgers. He was a second-round draft pick of L.A. and played with them for eight years. I've stressed this on my blog: Buckner was a Dodger for as long as he was a member of any other team. Yet his time with L.A. -- when he was young, vibrant, talented and exciting -- seems to be forgotten. 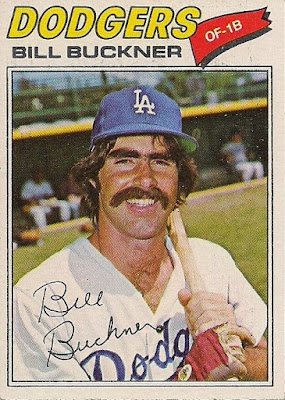 Buckner was a poster boy for 1970s virility, all chest hair and stache and bushy brows. That '77 Topps card came with its own sound effect when I pulled it as an 11-year-old. 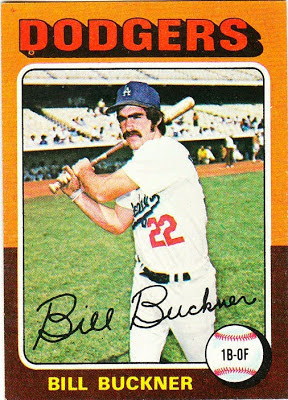 So many of Buckner's Dodger cards have meaning to me. His '75 card was one of those coveted items that I viewed for the first time in the Baseball Hall of Fame. 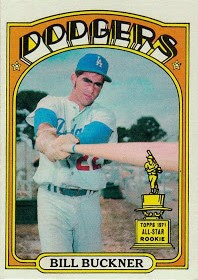 Buckner's first solo cards -- sans mustache and long hair but still with the brows and aiming to knock that baseball player off the trophy -- was also one of the first '72 Topps cards in my collection, owned long before I ever aimed to complete the '72 set.

In 1976, Buckner was traded to the Cubs because he had lost his wheels and the Dodgers didn't have a spot at first base for him.  Rick Monday was OK but I've often wondered how good the Dodgers could have been if Buckner remained with L.A.

I've never been a Cubs fan, but many consider that franchise another one from "the good side," and Buckner played for them, too.

Eight years later, Buckner came to Boston in the Dennis Eckersley deal. I know no one remembers this but there was a time when the Red Sox were as lovable and downtrodden as any other baseball team. They truly seemed cursed and nothing was more of a certainty than when the ball went through Buckner's legs in 1986. Even us nonbelievers blurted out: "Damn it, they ARE cursed." And the bad side -- this time the New York Mets -- had won again.

Buckner played for some great teams and was a great talent, but he never played for a World Series winner. I always thought he suffered too much for that one error and suffered in other ways, too, as injuries ate away at his true talent.

He seemed the perfect player for such star-crossed franchises as the Dodgers, Cubs and Red Sox, teams who for decades were known for being losers. Things have changed for all three. 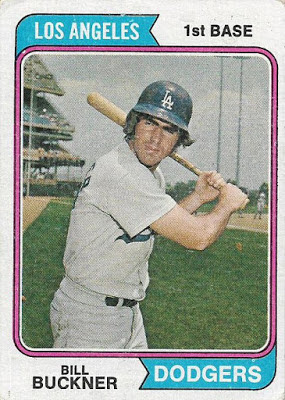 It's a relief that in recent years, Buckner was able to receive closure and forgive all those who made life hell after 1986.

But for me, in a way, Buckner's career ended with that trade to the Cubs, one of the first trades I ever knew in which a known member of my favorite team was shipped away. 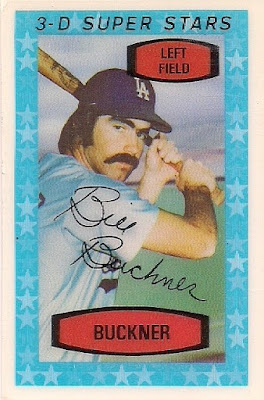 Bill Buckner will always be remembered by me as a member of the boys in blue, a member of the good guys, where the road is difficult and not all that successful but somehow that just made me like him all the more.

I, of course, as a Mets fan was happy with his World Series error, but that isn't really the comment that I wanted to make here.

Old Cards said…
I remember when the Red Sox were lovable and downtrodden and I remember when Buckner came up with the Dodgers and of course I remember the 1986 WS. Buckner had a nice career and put up some good stats. Too bad the error followed him like it did.
May 27, 2019 at 11:03 PM

bbcardz said…
I remember Bill Buckner mainly as an outfielder for the Dodgers and he had a knack for diving catches. I was even lucky enough to be at one of those early 70's games where he made a spectacular diving catch. That there is my most prominent memory of Bill Buckner. RIP.
May 28, 2019 at 12:48 AM

Fuji said…
I've seen enough of his 70's cardboard to know that he played with the Dodgers, but don't remember seeing him play with them. I was a little too young. Pretty sure my first memories of Buckner were pulling his Cubs cards as a kid... and of course the 1986 World Series incident.
May 28, 2019 at 10:36 AM

Baltmoss68 said…
Great tribute for an outstanding player and person. As a kid I was hoping he could find his way to 3000. Not quite but still a tremendous career. RIP Mr Buckner
May 30, 2019 at 8:47 PM