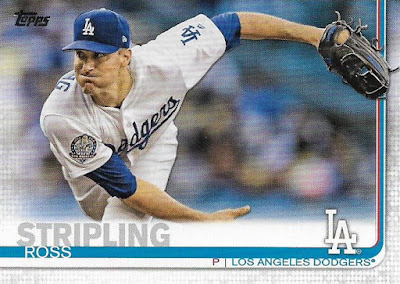 Peter from Baseball Every Night offered to send me this fine 2019 Topps card of Ross Stripling. It's much appreciated and I'll answer him back with some cards around about late May (you think I'm joking, I am not).

I like this card because although I touted the benefits of being able to see the full ballplayer on yesterday's post, closeups are fun if they're presented in an interesting way. This is. It's horizontal, the glove is giving off that 3D vibe and Stripling is making funny faces.

My guess, though, is that Stripling doesn't (or won't) like this card when he saw (sees) it. Let's flip to the back for why: 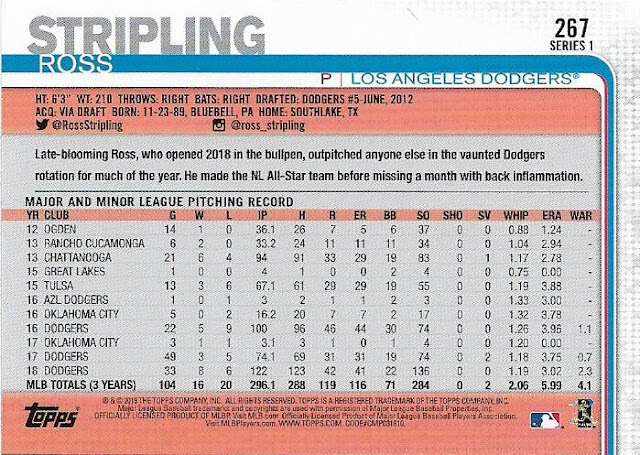 That's a rundown of Stripling's many, many stats -- it's so nice to have complete stats on the back of baseball cards again.

I can hear Stripling -- and his entire family -- saying "what the hell?" right now.

In all of Stripling's pro seasons, he has never posted an earned-run average even above 4. Yet, right on the back of his baseball card is a really, really terrible career ERA of 5.99.

After mentioning this on Twitter and going through all of his counting stats, it was determined that almost all the other career stats are correct, except for ERA and WHIP. And a couple of math wizards determined that what Topps (or whoever) apparently did was divide Stripling's innings pitched only for his 2016 and 2017 seasons into his career earned runs, which yields a 5.99 ERA.

If one uses, oh, the same years of stats for innings pitched as for earned runs, then you get Stripling's actual ERA, which is 3.52.

That is the career ERA listed for Stripling on his baseball-reference page. I just assumed Topps was using stats from baseball-reference or some other stat service. Maybe Topps is calculating its own stats to save money? I have no idea how that works, but plastering a 5.99 ERA on the card of a player who's just trying to make a living in baseball is not a good look.

So with that established, the very next day, I went out and bought a blaster of 2019 Heritage.

I know I said I wasn't going to do anything like that, but something made me change my mind -- I'll cover that in a future post (no, I am not collecting the set). One of the cards that I was pleased to have fall out of the box was this one: 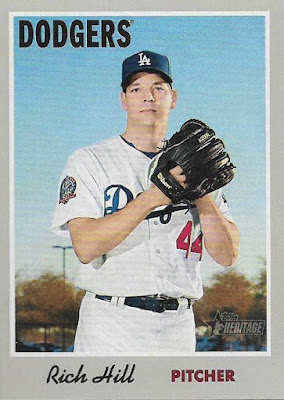 Still looking for Rich Hill's 2018 Heritage card, because that's an SP, so it was nice to find Hill in Heritage so early.

Best of all I got to look at those many wonderful career stats that Hill owns: 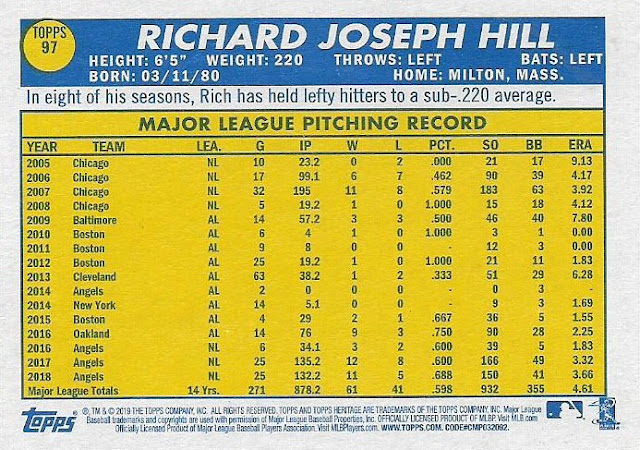 That is glorious. All those numbers and team names and I was reveling in it for a minute until I saw something jarring.

Just to fill you in, in case you don't know, Rich Hill has pitched for the Dodgers for the last three years, from 2016-18.

Yes, it's the Angels. The National League Angels.

Maybe complete stats on the back is a little too much for Topps to handle.

I know mistakes happen. I work in the newspaper business. Mistakes get printed all the time. And it's not because people are malicious or incompetent. It's human error. We all do it.

But there's one thing that newspaper readers come back at us that is difficult to argue: "If I'm catching these errors for just the stories I read, how many other mistakes are you making?"

But I thought the same thing. I've read the backs of maybe -- I don't know -- 10 cards from 2019 so far this year. I just don't have the time to read them in detail like I did when I was a youngster. So I glance at the ones that draw my eye, and those are almost always Dodgers. ... And I've found two big-fat errors already.

I don't think I want to study any more backs. 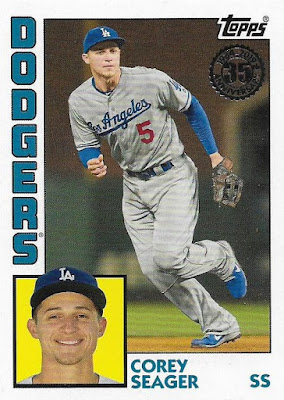 Peter sent me another 2019 Dodger card to go with the Stripling.

I haven't looked at the back yet. 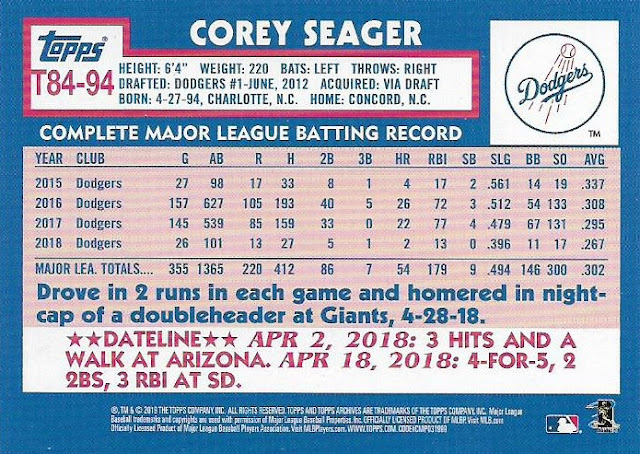 You look at it. I'm afraid of what I might find.

(Update: The Heritage card of Dodger Enrique Hernandez also lists him with the Angels on his career stats, so this may be some sort of homage to 1970 Topps? I don't know what that is, though. The cards that Hill and Hernandez match up with in the 1970 Topps set -- Joe Moeller and Manny Mota -- don't have anything like that on their backs. Meanwhile, other Dodger Heritage cards I've pulled have no mention of the Angels on the back. Hmmm. Anybody know 1970 Topps THAT well?)

Jason T. Carter said…
Knowing Topps' affinity for errors in recent years, one has to wonder if these were intentional.

Brett Alan said…
Hey, I bought a card in a Dimebox from the oddball Baseball Wit set tonight. The player was referred to, more than once, as "Willie Mayes".
March 5, 2019 at 8:53 PM

JediJeff said…
Is it me or does the back of that Seager card read "Corey dreams to play for the Giants one day cuz he thinks all Dodger fans are pussies"?

Fuji said…
Yikes. Looks like Topps went 2 for 2 today, but I'll give them a free pass. That Seager is actually a really nice looking card. I'm really excited to see him play this season.
March 6, 2019 at 12:22 AM

Nick Vossbrink said…
The only backs I've looked up were Ohtani's because I was curious what Topps was going to do (especially since it doesn't look like they did any hitting or pitching SPs). Flagship and Heritage show him batting and have batting stats on the backs. 1984 insert shows him pitching and has pitching stats. I'm kind of sad they didn't try and put both on one back.
March 6, 2019 at 8:02 AM

Collecting Cutch said…
Silly silly Topps and their errors. McCutchen has had a few intentional errors over the years, but somehow I don't think these were intentional.
March 6, 2019 at 5:46 PM

Commishbob said…
Maybe if they didn't try to put out so many sets on top of ech other they could do more quality control.
March 7, 2019 at 5:14 PM