March 14, 2019
(Greeting on National Pi Day. I am woefully unprepared for this occasion and I have no pie. I am sad. Time for Cardboard Appreciation. This is the 279th in a series): 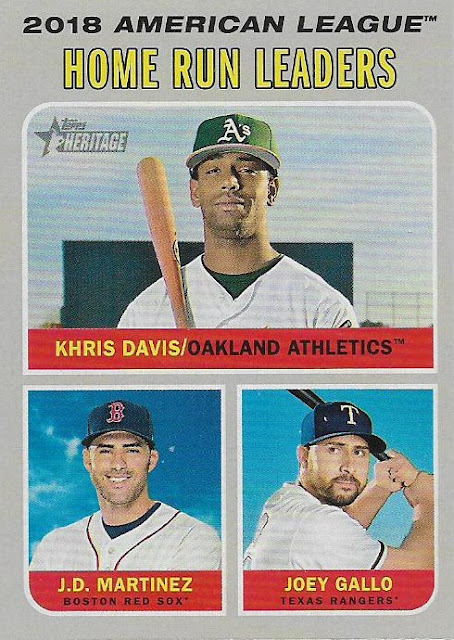 Baseball announced today a set of rules changes, which are mostly minor enough that I have little problem with any of them.

Forcing a reliever to face at least three batters is perfectly OK with me. I can't stand how pitching changes drag out games. The move to a single trade deadline is good with me, too. That trade waiver deadline thing has confused me since I was a young fan in the '70s. Also, one uniform roster of 28 players each September is fine. The million dollar prize award for the home run derby doesn't matter to me because anything that isn't related to "get rid of the home run derby" doesn't register. It's a non-factor in a non-event.

The one thing that I don't like is sticking a runner on second in extra innings in the All-Star Game. That is just foolish talk and isn't helping anything. I also see myself growing tired with the "stages of voting" for all-stars.

All of this is meant to help grow what some consider a stagnant game and also to help negotiations with the Players Association ahead of the next collective bargaining agreement.

That's a good thing -- I don't think anyone wants a strike -- but none of these announced changes fix what I consider the most annoying part of the current game:

All the home runs.

The "blast-off" mentality of the current game -- mostly about how offense seems to be all home runs and nobody can perform basic hitting tasks, like an opposite-field single -- is ruining my watching enjoyment. I do not like how I'm forced to wait for someone to hit a home run for any team to have a rally. That is not my idea of baseball and it makes every hitter appear one-dimensional. 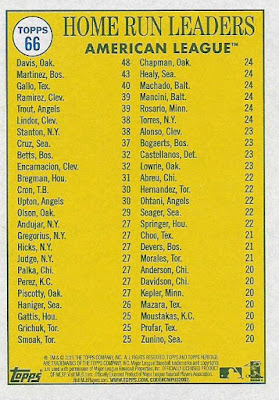 Here is the back of the 2018 Heritage American League Home Run hitters card. It documents in great detail the 50 top home run hitters for the AL in 2018.

As someone who grew up during the so-called "second dead ball era" of the 1970s and early 1980s, seeing the 50th-place hitter with 20 home runs is shocking.

The average number of home runs hit by those 50 players is 26.44. There are a total of 1,322 home runs. The high-end of the leaders is not exceedingly high. There are just three players with 40 or above, and 13 players with 30 or above.

The stunning part to me -- again, this is someone who as a kid was watching players lead the league with 36 homers -- is the sheer number of players with between 20 and 29 home runs. That total is 37. Thirty-seven! That seems insane. 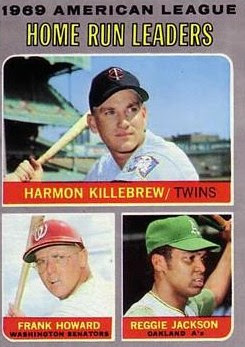 Here is the borrowed image of the 1970 Topps Home Run Leaders card (I don't have this card yet). Those are three, well-known fearsome sluggers.

Here is the back of that card: 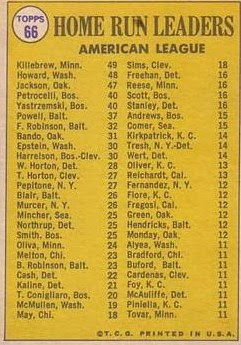 Still I can't justify my perception that all I see is home runs when I watch games these days.

I checked out the hitting averages for a typical game in 1969 and in 2018 for the American League on baseball-reference.

So I thought, maybe the HR is a greater percentage of the number of hits in an average game these days. I don't have time or the ability to do an exhaustive study of this, but I didn't find the home run swallowing up all the other forms of hitting either, at least not comparing 1969 with 2018.

That .249 batting average marks a steady decline from the late 1970s, so maybe hitters have a point. But I would have more sympathy for them if I saw more singles in my games today and fewer home runs. And eliminating the shift is not the answer. Hitters should learn to counter the shift other than just hit the ball over the wall.

Lowering the mound isn't the answer either.

I understand that this may be just me stuck in the past, wishing baseball could be played the way it was when my favorite '70s and '80s ballplayers roamed the field.

But you can't change the way I feel about the current game. It looks like some video game and I don't watch baseball for video game highlights. I want to see five-single rallies and it feels like I never see that anymore.

If this is the way the game is trending -- if this is the way to attract "younger viewers" -- then I am pretty sure I will stop watching. I don't mind things like pitch clocks and roster adjustments, etc. But anything that tilts the game in favor of one side or another will lose me for good.

I appreciate baseball scrapping the one-batter reliever. I think moving away from specialization is a good thing. I would like the same thing to happen to all the hitters who specialize in only hitting home runs.

Because of the way the teams have ®©™ on the various parts of their names. Ditto for what happens with Washington and Colorado in the NL on most cards.


Anyway, the Home Run game is indeed kinda boring. 0.5 less Doubles per game is a change; as batters try to hit over the shift one would expect more Doubles, not less. Triples are always just a lucky Double and have a big Park Factor at play.

But the data slicers are endlessly slicing things so it always remains to be seen what they come up with next. The FanSided blog for the Brewers had an excellent piece the other day about how Milwaukee ramped up Steal attempts last year, and likely won several extra games out of it, even though the data says the risk is not worth taking. But that data is for across a whole season, and can not account for the risk/reward of the decision at a single point in time within a game. My suspicion is that Milwaukee might have won more games than the formulas predicted for them at this point on the calendar last year as a result.

The Royals have a bunch of speedsters ready to go this year - Yost might have been watching Counsell's games. I think this could well allow KC to climb out of the cellar this year by a standings spot or two, we'll see.
March 14, 2019 at 8:45 PM

Old Cards said…
You made me look back at the 1961 season. I thought for sure the year that Maris hit 61 and Mantle hit 54 and several more hit 40+, I would be able to show you a year in the past when homers ruled the season. However, when I looked at the AL home run leader card, only 27 players were listed and even with the big totals by M&M, the totals quickly went down to 11. You win.
March 14, 2019 at 8:46 PM

deal said…
The tiny ballparks also speaks to those dingers - IDK maybe those short fences are reachable by more players who cannot hit singles. Regardless NL run scoring in 2018 is up 0.29/Game for each team from 1969, that is a run every three games so whatever the batters are doing is producing more runs and I am afraid to say they will keep on doing that.
March 15, 2019 at 2:57 AM

gregory said…
I'm thinking that one day a manager will put on a hit-and-run, it will be executed successfully, and fans will go bonkers and say "MOST EXCITING PLAY EVER!" And after that, maybe good ol' baseball will start making a comeback.
March 15, 2019 at 7:56 AM

Trevor P said…
The thought of a 5 single rally has me all pumped up now. It doesn't have to be a home run to be exciting, right? The problem is in the numbers. I remember reading a really interesting article about beating the shift last year, and it explained that players swing for the fences over the shift because, statistically speaking, singles don't produce many runs. They have a better chance of scoring by swinging away every time, even with the chance of a strike-out, than they do by dropping a single into the opposite field gap. I don't like how that is changing the game, but if the object is still to score runs and win, I don't see strategy going away from the statistical analytics.