If you were asked to come up with the quintessential 1970s ballplayer -- the one person who was the most typical example of a ballplayer from the '70s -- how would you go about determining that?

Perhaps you would narrow it down to players who spanned the entire "Me Decade". Maybe you would determine which players won the most titles during the '70s. Or maybe you'd break out the statistics and develop formulas that matched the average production of a '70s ballplayer, the propensity to gravitate to a team featuring baby blue road uniforms, or calculate the the collective size of hair length and mustache.

I didn't do any of that to figure out the quintessential '70s ballplayer.

Instead, I merely consulted some Hostess cards from that very decade.

Based on that Hostess research, there is one player among the three above that is a quintessential '70s ballplayer, and I hate to break it to you Carlton or Porter fans: that player is Ron Cey, Infield, Los Angeles Dodgers.

Today is Cey's 69th birthday. As you know, he is my favorite ballplayer of all-time, has been since 1975.

I show some bias when it comes to my favorite ballplayer and the '70s, so I might as well continue that for at least today. It's The Penguin's birthday. I need to show some respect.

So how did I let Hostess determine that Cey is a quintessential '70s ballplayer?

I determined all of the players to appear in every Hostess set, issued from 1975-79. That's five sets, so a quintessential '70s ballplayer should have five different Hostess cards (I'm not counting unissued proofs, Hostess fanatics).

Cey is one of those players to appear in all five sets.

There they all are, side-by-side.

I'll show them one at a time, too, so you can see them at a respectable size. 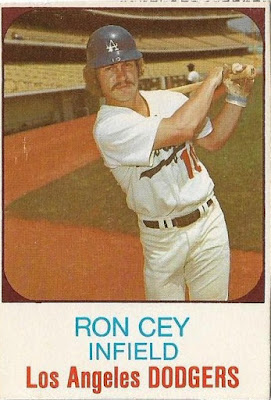 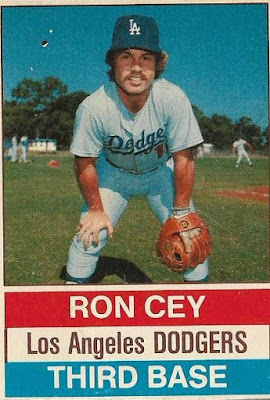 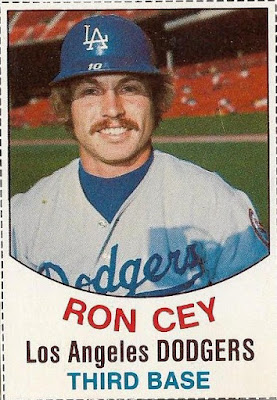 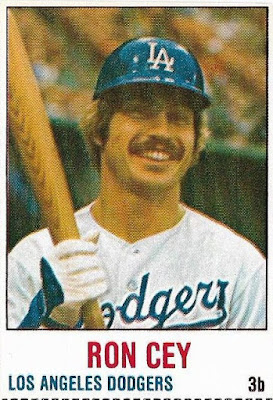 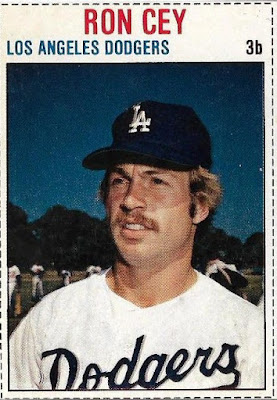 
There you have it. The quintessential '70s ballplayer is a man of average height, who provides solid middle-of-the-lineup power, fields his position well, runs like a penguin and wears his blond hair long and mustachioed. He also happens to play for the Dodgers.

But that might be my bias coming through some.

Weren't there other players who appeared in every issue of Hostess?

Here are the players not named Cey that show up in all five Hostess sets:

I love this list. 1975-79 is exactly when I was discovering Major League Baseball and its players. I hold great attachment for many of the players on that list. These guys may seem ancient and long ago to you, but to me they are young and at their peak.

Hostess did well covering the superstars of that time period -- Bench, Jackson, Rose, Seaver -- and they made sure to feature the upcoming stars, too -- Madlock, Winfield, Yount. But there are several big names that didn't make all five sets, names like Carew, Garvey and Brett.

Does that mean there are quintessential '70s players who didn't appear in all five Hostess sets?

Well, you won't hear that from me. Especially not on Cey's birthday. 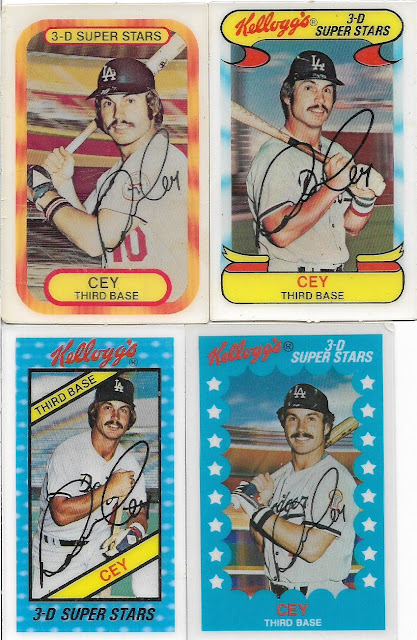 After all, I'm still miffed that Kellogg's didn't feature Cey in every one of its sets for when he was playing. Just four?

acrackedbat said…
I judge a 70s man and ball player by their hair, stache and sideburns. Cey fits the bill! Happy Birthday to the Penguin!
February 15, 2017 at 9:05 PM

CaptKirk42 said…
Those were the guys I grew up knowing. I recall the first time I dared to watch the All-Star game was either '75 or 76. It was 76 I think. I remember them rattling off the line-ups roll call and knowing the name of each and every one of the guys named. It was one of only a handful of All-Star games I have watched in their entirety.
February 15, 2017 at 11:03 PM

Jim from Downingtown said…
Porter was the poster boy for annoying batters-box rituals:

Aarrgh! He wasn't GOOD ENOUGH to warrant all that nonsense!