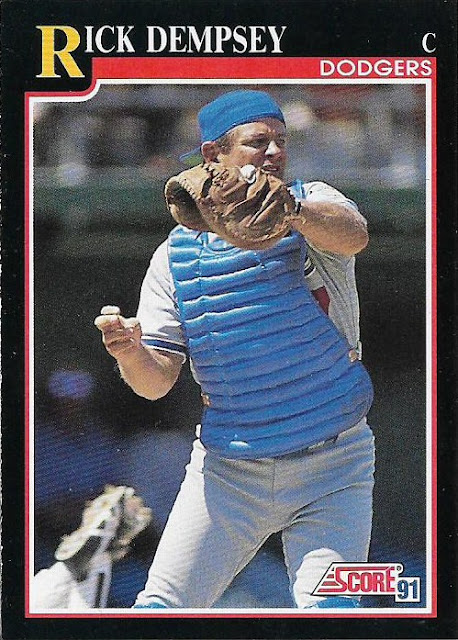 In continuing with my research on helmets on Dodger baseball cards, I struck upon this semi-historic card.

This card features one of the last known examples of a catcher wearing a cap while fielding his position on a baseball card issued during that player's career.

Rick Dempsey was the last catcher to wear a cap under his mask instead of a helmet. Even long before this 1991 Score card was issued, Dempsey's cap-wearing was a novelty. Many catchers had gone over to the helmet long ago. So card companies would often show Dempsey wearing his cap just because it was so delightfully unusual. 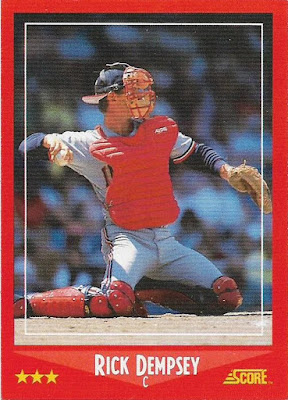 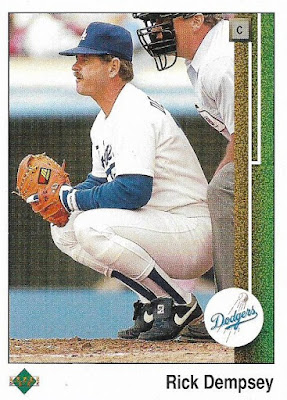 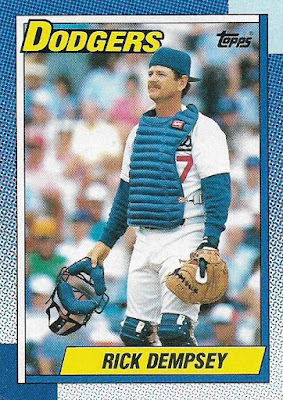 But by 1991, Dempsey was the last, there were no other catchers foolish enough to wear almost no protection on their head while crouched behind a large man swinging a piece of lumber.

Yet, Topps went with a head-and-shoulders shot of Dempsey wearing a helmet.

Donruss, Fleer and Upper Deck didn't even bother with Dempsey. They were done with his career, cap and all.

So, Score ends up with the landmark card, one of the last to show a catcher in a cap while working behind the plate.

There is another card issued that same year that shows Dempsey in a cap. 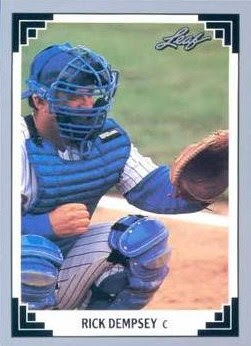 Dempsey was signed as a free agent by the Brewers after the 1990 season after being granted free agency by the Dodgers. So, actually, this photo was taken later than the Score Dodger photo. But since the cards were issued in the same year, I'm calling it a tie. The Leaf and Score cards in the 1991 set were the last to show a catcher wearing a cap behind the plate. (There are also oddball Brewers cards issued that same year that show Dempsey in a cap while catching).

Of course, with the advent of retro cards there are plenty of newer cards showing Dempsey in a cap, but he had long been retired when those were issued.

I don't have nearly enough time to track down the one-off cards that appeared after 1991 that show a catcher in a cap. I'm sure they exist.

I'm comfortable thinking that the '91 Score Dempsey card is one of the last of its kind. You have to give that to '91 Score. It has so little.

gcrl said…
I like most of dempsey's dodger cards for this very reason. In an unexpected twist, Jerry Grote's 2005 topps atff card shows him wearing a helmet while In a posed crouch.
February 21, 2017 at 8:23 PM

John Bateman said…
Because the world needs to know: I believe the 1979-80 Topps Basketball card of Darrell Dawkins showed the first basketball player wearing an earring. I know Dave Parker wore an earring but I could not see it on any of his late 70s Topps cards.

Not that you need anymore to do, but I wonder if you know (or could find) the first baseball card of a player wearing a earring (or visible tattoo, a chain necklace etc.. - the possibilities are endless)
February 21, 2017 at 11:08 PM

Fuji said…
Very cool card and post. A few weeks ago, I wrote a posts about "famous lasts". Dempsey and this card would definitely fit the bill.
February 22, 2017 at 12:18 AM