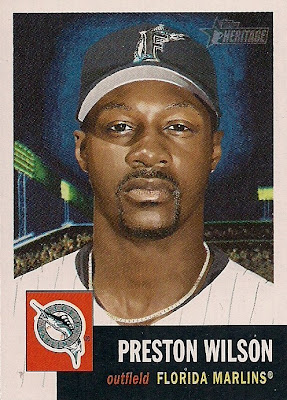 The world of the Night Card Binder is not above artificially created dramas.

As an example, this is a 2002 Topps Heritage card of Preston Wilson, who as you may have heard is both the stepson and nephew of former Mets outfielder Mookie Wilson. (He's also George Foster's godson). It's a pretty cool card because it depicts a night ballpark scene in the background.

The card and the scene actually pays tribute to a 1953 Topps card of Red Sox pitcher Dick Brodowski. 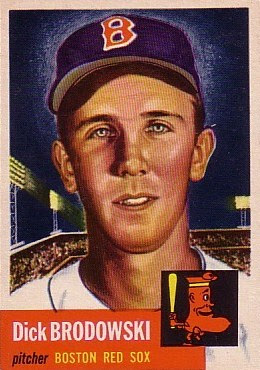 You can see that the backgrounds are just about identical.

Why Topps chose Wilson for a card that resembles the Brodowski card, I have no idea. They appear to have nothing in common. Didn't play for the same teams, didn't play the same positions, don't have similar names, and as far as I know, Brodowski isn't both the stepson and nephew of the same person. 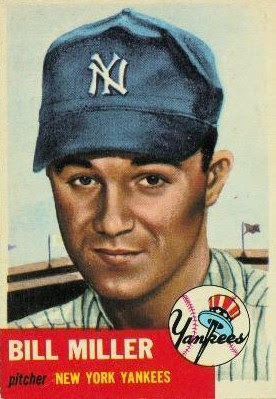 Yeah, I've never heard of him either. No connection to Preston Wilson, I know that.

But here comes the artificial drama.

I have already discounted the '53 Brodowski card as the oldest Topps night card because the night scene in the background is actually painted, not real.

So does this mean I don't include the Heritage Preston Wilson card in the binder because it doesn't depict an actual night scene?

Does this mean it's not a "true" night card?

Is the night card binder going to go the way of the New York fans and media who noisily dissect who and who is not a true Yankee?

OK, since I put it that way, Preston Wilson's 2002 Heritage card is now eligible for the night card binder.

There's already too much artificial drama in sports.

Fuji said…
How the heck did you figure out that the Wilson background resembles the Brodowski? Great eyes!
March 24, 2013 at 5:56 PM

Brendan Taylor said…
you have an eye for detail my friend i would have never caught that.love the Blog btw check mine out http://truschoolsports.blogspot.com/
March 25, 2013 at 1:06 AM