My 1951 Topps Red Back Duke Snider and me 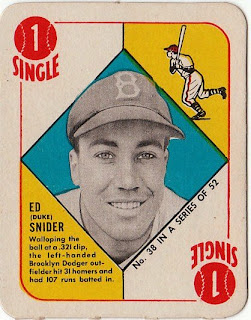 I said before that receiving two cards autographed by none other than Duke Snider would help right a 30-year-old wrong, and to my way of thinking it does. Some may think it doesn't, but hear my story and see if what I'm saying shakes out.

I received this 1951 Topps Red Back Duke Snider card in a trade when I was a sophomore in high school. There were two kids in my class who seemed to have unlimited access to baseball cards like this. I don't know how they got them all -- this was long before the internet -- but they owned some sweet, old cards.

I traded away a couple of nice cards for the Snider, 1969 cards of Pete Rose and Roberto Clemente. But the Snider was easily the oldest card I had seen in person, so the deal made sense to me. And the Rose and Clemente cards weren't in perfect shape. The Snider card was. The transaction was made between classes and I happily walked into the classroom with my new acquistion and sat down at my desk.

Behind me sat a kid that I'll call "Pond Scum." He seemed like a nice enough kid. We were on pleasant terms. He was a football player, but he also collected baseball cards. To me, that was an odd combination. In high school, football players seemed more grown up to me than other kids. And grown-ups didn't collect cards (boy, was I wrong on that one).

Pond Scum heard about the trade and wanted to see the card. After all, a '51 Topps card wasn't something a 15-year-old saw every day. I didn't have any reason to mistrust him. So I turned around and gave him the card, which was protected in a sleeve that fit the exact dimensions of the smaller size.

Class had begun, and I turned around to do my work. About 5 minutes later, Scum tapped me on the shoulder and gave me back the card. I took it and about 30 seconds later realized that there was a crease running through the middle of the card from end to end. That realization hit me as if a lightning bolt had penetrated the roof of the school and struck me square at my desk. I'm quite sure I shook when I saw that crease.

Then came the thought: POND SCUM HAD CREASED MY CARD!

The card had been in great shape when I traded for it. Even in the scan up top, it's hard to tell that the card is creased. You can see it a little better on the back. 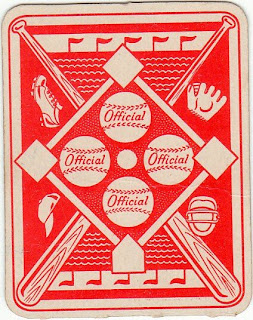 It looks a lot worse when you have it in your hand, and you're looking at it up close.

Now, ideally, I would have turned around and dropped him right there. But good little night owl was in class, and that would be disruptive. Plus, Scum was a football player and almost twice my size, so accosting him wasn't a good idea.

I never did bring it up to Scum. I don't even know if I got revenge in some sort of indirect fashion. It's possible I did something underhanded. Otherwise the anger would have eaten me up all these years.

It's tough being a 15-year-old. There are so many appropriate responses available to you as an adult that you would never think of as a teenager. Maybe I was too young to be carrying a card like that around at my high school.

A couple of years later, I obtained the 1957 Topps Snider card, which I think alleviated the pain that I felt over that creased card.

I have no idea what happened to Scum or to the two kids that traded me all those cards. I'm not one to go to high school reunions or search out old friends through Facebook, etc. But the fact that I now have two autographed cards of Duke Snider gives me something that I hope Scum doesn't have. He took away my shot at bragging about my perfect '51 Topps Red Back Duke Snider card. But he's not taking away my shot at bragging about my autographed Snider cards.

Finally, I have a Snider card that I'm proud to display. Two of them.

Grand Cards said…
Oof. I knew something was going to happen, but that was like a punch in the gut. It's almost as though it would have been better to have something horribly destructive happen, instead of having to live with the painful memory of what was once a perfect card. Great story, and your new cards look wonderful.
March 8, 2009 at 9:00 AM