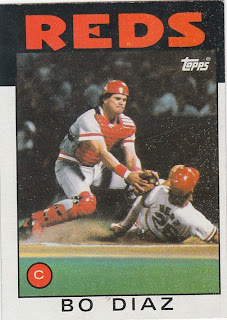 Until looking it up just now, I wasn't sure whether this 1986 Topps card of Bo Diaz was actually a night card. A lot of the photos taken inside old Busch Stadium in St. Louis during the '80s are dark (some of the '70s photos in Yankee Stadium are the same). So you don't know if you're looking at a night game or day game. But I found the game in question.

In the first inning of a night game between the Reds and Cardinals on Sept. 4, 1985, Vince Coleman singled, Willie McGee flied out, Coleman stole second, Tommy Herr walked, Coleman stole third, Herr stole second (these were the 1985 Cardinals after all), Andy Van Slyke was walked intentionally, and Terry Pendleton singled to left field. Coleman scored but Herr was thrown out at home by Max Venable. 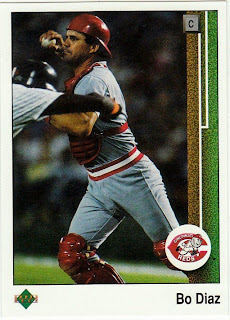 So what that means is Diaz had two night cards in the late '80s. This 1989 Upper Deck card is a night card as well. That's pretty impressive for one guy to have two night cards during a period when they weren't photographing that many night games.
Diaz, unfortunately, is known to many fans as the player who died at age 37 when the satellite dish he was adjusting fell on him. We're fascinated by the oddly morbid and this falls into that category. "Remember Bo Diaz?" "Oh, yeah, he's the guy who got crushed to death by his satellite dish."
But Diaz remains a popular name in his native Venezuela, and he was a respectable catcher for both the Phillies and Reds during the 1980s. I didn't like him very much when the Phillies played the Dodgers in the 1983 NLCS. But he hit only .154, so everything was cool between me and Bo the next year.
I actually remember Baudilio (his real first name) playing for the Red Sox when he first came up in 1977. He played in only two games that year, but I watched a lot of Red Sox games then.
So there you have it: a little more to know about Bo. There was more to his life than that satellite dish. And he was kind of a night card pioneer!