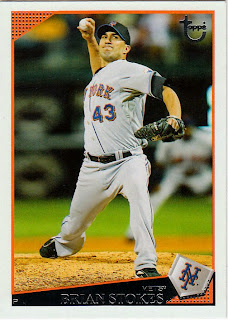 Topps Heritage wasn't the only thing I found at Target on Wednesday. When I say the card aisle was restocked, it was RESTOCKED. Aside from Heritage blasters and loose packs, there were blasters of UD Spectrum, blasters of regular old UD, regular old UD packs, Topps Attax, Topps regular blasters, Topps throwback blasters, Topps cereal boxes, Topps rack packs and Topps loose packs. And all of the 2008 stuff was still there.

Honestly it was like Topps received my complaint letter, even though I actually just stashed it in a desk drawer and never sent it. ... OK, I never even wrote a complaint letter. I just bitch on this blog and hope someone important will wander over and read it.

Staring at the selection, I debated what I would get to go with my Heritage blaster. I finally decided that the vibrant, mildly nauseating colors in Spectrum might make me car sick. Not that I open packs while I'm driving. That would be CRAZY. But I picked up a blaster of Topps throwbacks instead, to see what they'd be like.

They're OK. I don't understand their purpose. I like them better than the actual '09 Topps -- the cardboard thickness and feel and all -- but you certainly don't need to collect both of them. They're way too similar. I also think the throwbacks would be more effective if Topps scrapped the foil and didn't make the fronts glossy.

So, anyway, that product analysis of Topps throwbacks is really an excuse to get to this week's night card: Brian Stokes of the Mets, one of the throwbacks out of the blaster.

Stokes is a former Tampa Bay player (is it possible to have more Rays players in 2009 products this year? I pulled triple the amount of Rays than I did almost any other team yesterday). The Mets acquired Stokes before the 2008 season. He's mostly a righty out of the bullpen, and expected to continue that role this year.

According to Topps, you want Stokes to be on the mound when Alfredo Amezaga, Jorge Posada or Michael Young is at bat. None of them have gotten a hit against Stokes, which is not great for those guys because Stokes has a career ERA of 5.64.

This could be the last throwback night card featured, because I don't plan to buy any more. But, as always, Dodgers are welcome.

Anonymous said…
So THEY are glossy. I've been contemplating buying some of the "12" blasters but decided to stay away. The fact that they're glossy turns me off. Reminds of that Topps 52 Style release for basketball a few years back. Blah. Get any Sox?

Anonymous said…
Great. And I seriously need to get your Dodgers out to you. Your team is going to be back in Brooklyn by the time I get this package out ...
March 20, 2009 at 5:07 PM