The ultimate reward for a miscut card

December 07, 2021
The ultimate reward for a miscut card is that I treat it as its own distinct card.
This doesn't always happen. I'm not a collector of miscuts, so often the card will end up in the dupes pile or (*gasp* *how could you?*) in the trash. For a miscut card to avoid that fate, it needs to provide something interesting outside of it being a mere cutting mistake.
Enter this 1982 Topps card of Fernando Valenzuela sent to me by Bru. 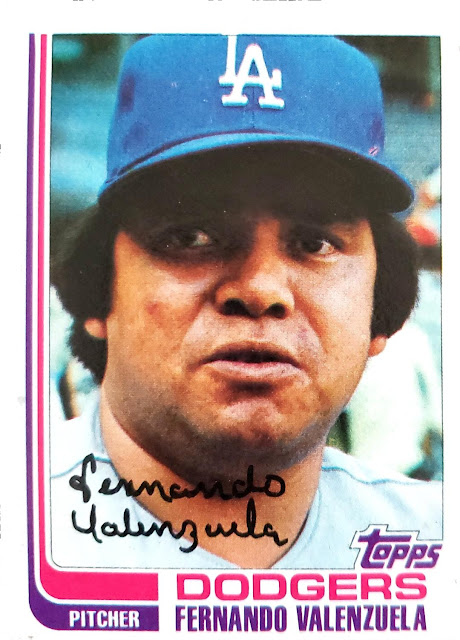 It looks nice and normal on the front, a familiar shot of the first solo base card of Valenzuela that Topps had produced.
Perhaps that alone would disqualify the card from being a distinct miscut. There is nothing about the front that tells you that there's something different. Oh, but the back: 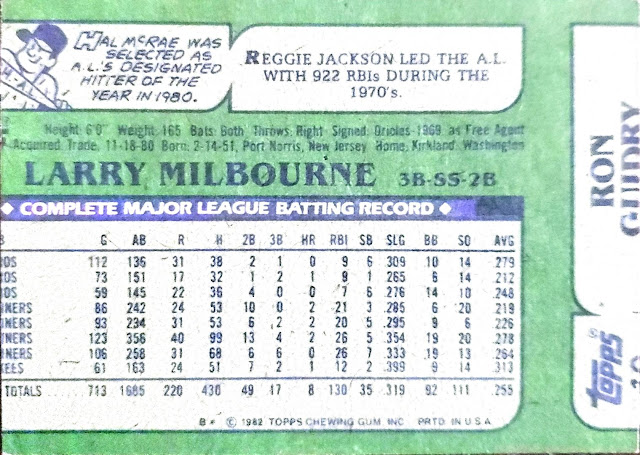 That is two separate players on the back of that card, and neither one of them is Valenzuela! In fact, there's more about Hal McRae and Reggie Jackson on the back of this card than Fernando.
Even better (or worse) is that Valenzuela is carting around on the back of his card two rival Yankees! At least the Dodgers beat Milbourne and Guidry in the preceding World Series.
It's also interesting that the Guidry card back shown is from his In Action card, the vertical orientation of the card probably helps with the identification of who is on that card remnant.
So that's three players on one card! I would say that's a distinctive miscut and the ultimate reward for it will be a spot next to the regular '82 Valenzuela in the portion of my Dodgers binders that house the 1982 Topps set.
There are very few miscut cards that get special treatment in my Dodgers binders, probably less than five.
So that's good thinking by Bru. Here's another example of outside-the-box collection thinking: 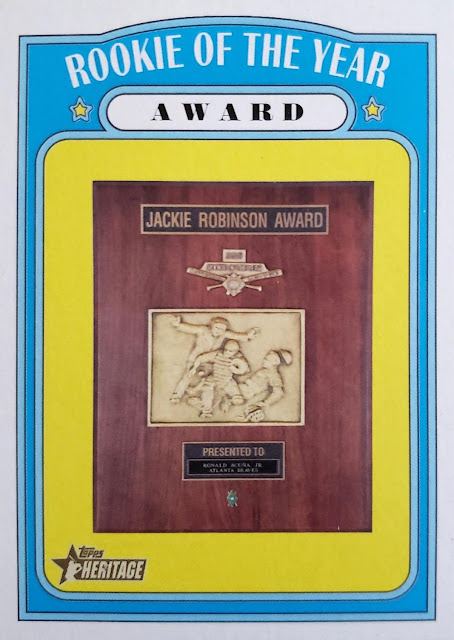 Dodgers card? Well, actually, I had never thought about it before, but now that I have ... Yes!
For those still puzzling, the MLB Rookie Of The Year Award is named after noted Dodger Jackie Robinson. There's a nice likeness of Robinson, stealing home, on the plaque.
The ROY Award used to be known as the Ford Frick Award but was named after Robinson on the 40th anniversary of him breaking the color barrier, in 1987. The ROY Award used to look like this: 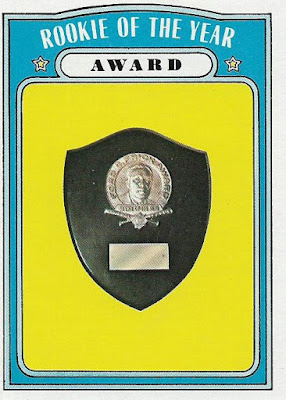 The Ford Frick Award now goes to a baseball broadcaster entering the Hall Of Fame.
So that Heritage ROY Award card is also heading to my Dodgers binder!
By now, the other cards that Bru sent of actual Dodgers players wearing Dodgers uniforms, with only Dodgers mentioned on their card backs are wondering what the heck is going on. So let's give them some publicity: 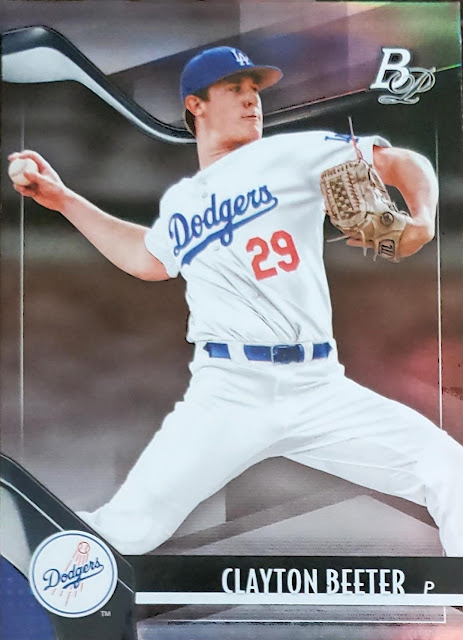 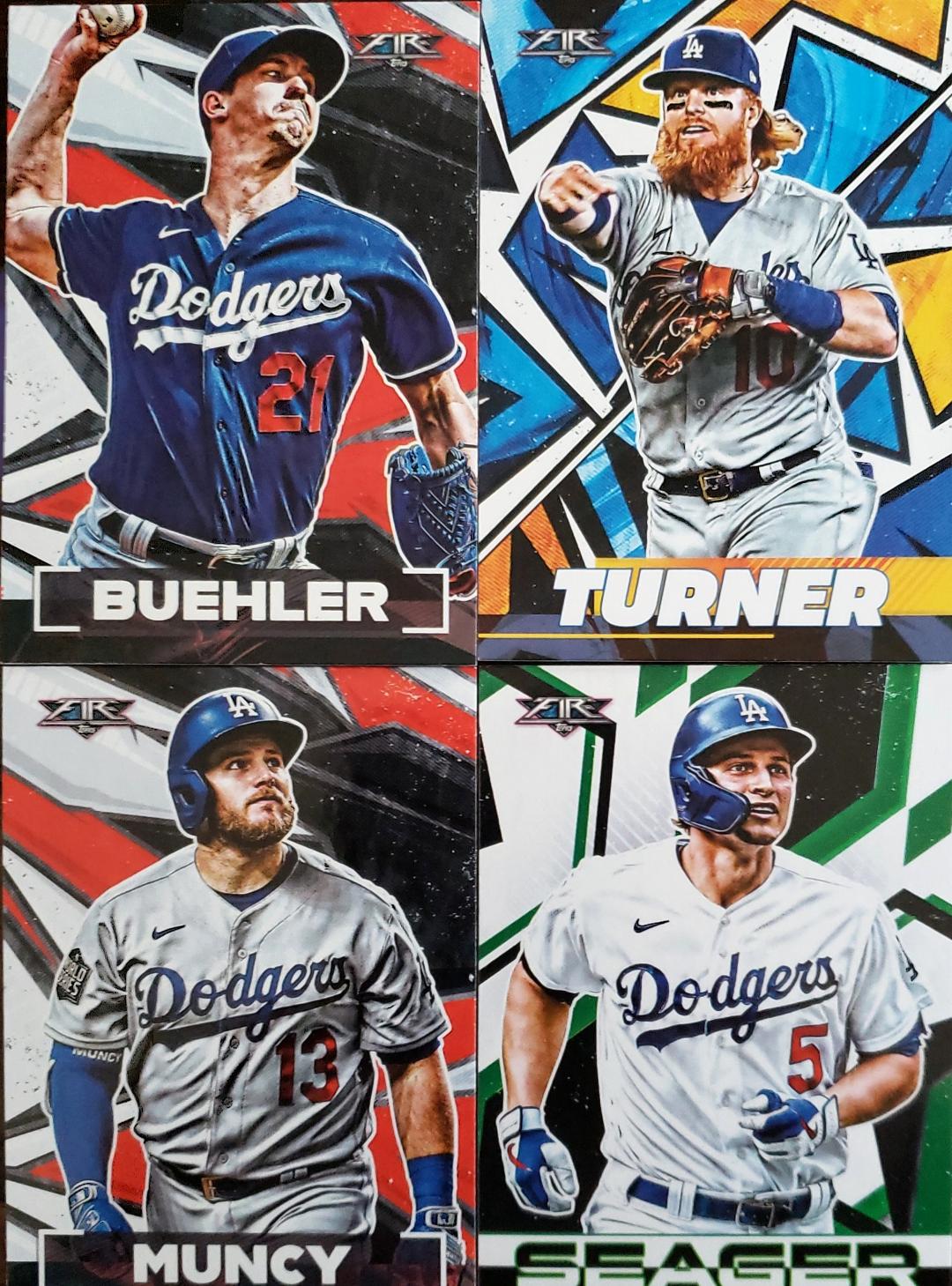 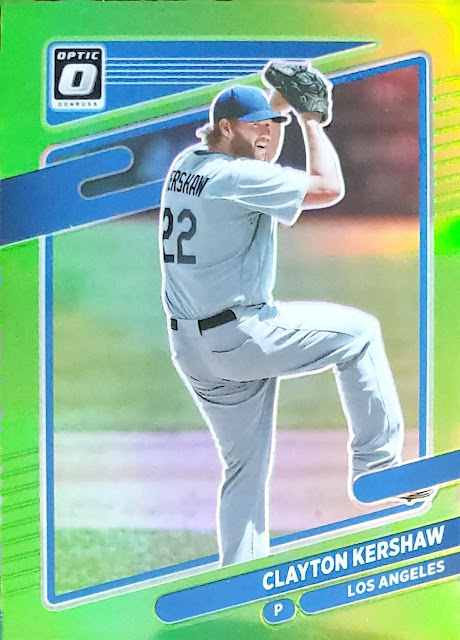 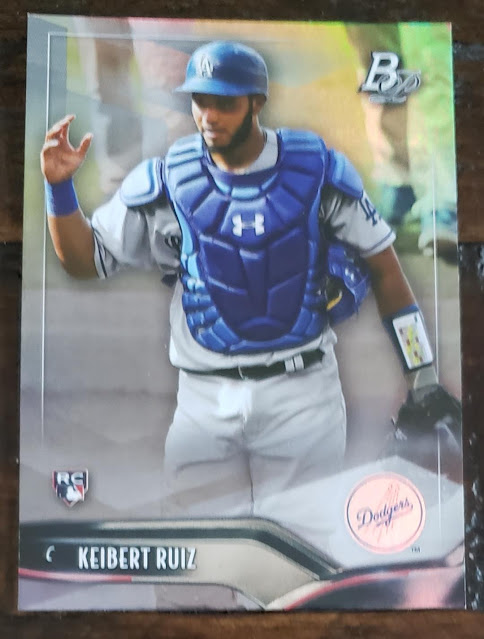 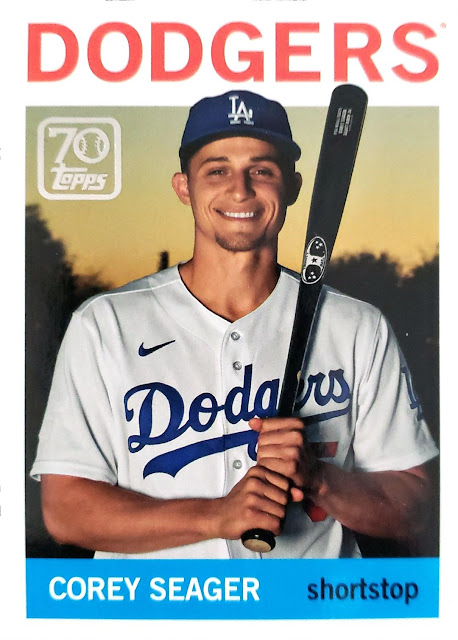 That's all needed stuff from 2021. It's interesting how much Fire (not the stupid description breakers use to sum up their hits, the card set) people seem to have bought this year. I'm now down to needing just the Pujols card for the team set and I haven't even purchased any of it.
The Seager cards I'm getting are now sad, but at least the 1964 tribute has a sunset in the background, kind of appropriate. I hope it's an actual sunset picture and not some photoshopped backdrop. 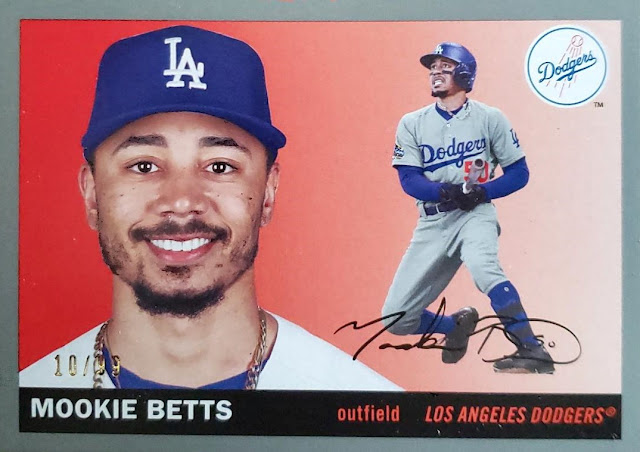 This is the card that kicked off the trade swap between myself and Bru. It's a numbered, silver border card from 2020 Archives. As you know, I'm a sucker for colored border parallels and while Archives doesn't make me jump at that stuff like I would for, say Chrome or even Bowman, the fact that it's Betts made me want it.
The slime green Optic Kershaw is neat, too, forgot to mention that. All in all a nice trade as all I did was send some Astros in exchange and my goodness trades are great for getting teams you dislike out of your house.
But I've covered all the trades that have come to the nest in the last month or so now. I guess I need to scare up some trades -- which is a little difficult to do during the holidays, especially since post office lines freak me out at this time of year.
But I'll get back to it soon. If I'm going to get to 100,000 Dodgers in my collection I'm going to need help!

Nick Vossbrink said…
The WIllie Mays Award card slipped into my Giants binder in exactly he same way. I wasn't going to actively acquire it but once I had it there was no place else to put it.
December 7, 2021 at 7:51 PM

I actually collect errors, even baseball and football errors. I have a section on my website dedicated to error types sorted by style of error. Like everything else, I'm only about halfway through scanning them.

Some of them are pretty crazy looking, while some barely show up in scans. (Missing uv coating is the hardest to show the difference). Printed fold is one of the more dramatic and rarer, after 30+ years collecting I've only ever seen two. One from 72-73 Topps hockey and one from a 2003 NASCAR set that was only sold in a tin.
December 7, 2021 at 8:14 PM

Nick said…
I'm glad other people collect miscuts because I'd otherwisde have very little use for them. Never thought to consider that ROY Award a Dodger card, definitely thinking outside the box there! Now I'm wondering if I should put it in my Dodger binders.

bryan was here said…
'82 Topps seemed to have a lot of miscuts/wrong back/blank back variations. I remember going to a card show back in early '83 and a guy had a binder full of '82s in various states as well as no black ink variations. I remember pulling a blank back Jim Spencer and a Mark Belanger/Don Baylor that has exactly half of each card on it!
December 9, 2021 at 3:16 PM