A case where I don't mind being nickeled and dimed 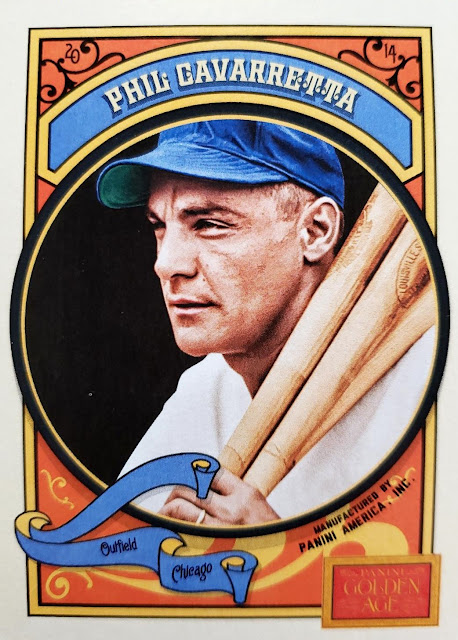 I haven't had much money to spend on cards the last three or four months. In fact, there's a card show this weekend and I ain't going. It's quite the contrast to earlier in the year when I was throwing money at 1956 Topps all-stars.
But there are a couple new bills to pay and if I'm going to unearth some cash on cards it's certainly not going to be the new stuff.
A few weeks ago I started to feel like I should live up to my name as a collector and see what the baseballcardstore had in stock. Even someone on a strict budget can afford to throw a few dimes at some cards.
I was surprised to find that the dimebox store has become a nickelbox store. In order to compensate for the crazy shipping costs, the site's owners have moved to tiered shipping prices, and although those are higher than what was once on the site, they've knocked back the price on their cards to a NICKEL. By the time I added up the cards I bought and the new shipping price, it was no different than when I bought them for a dime each.
But the biggest surprise for me was that I still am finding stuff that I need there -- Dodgers stuff that I need. 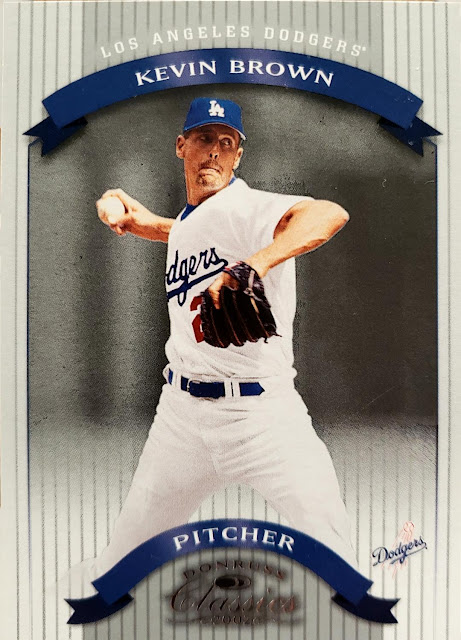 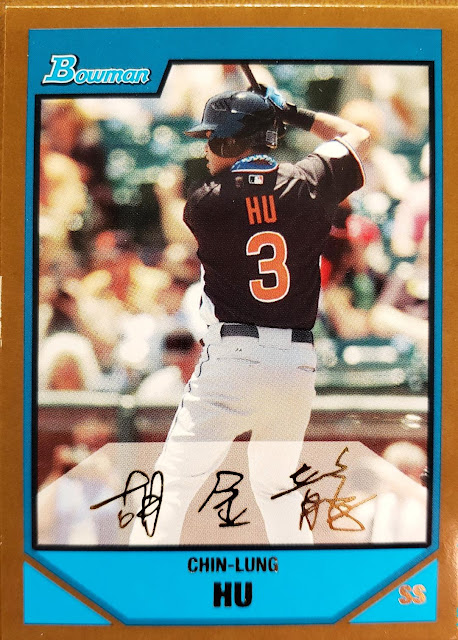 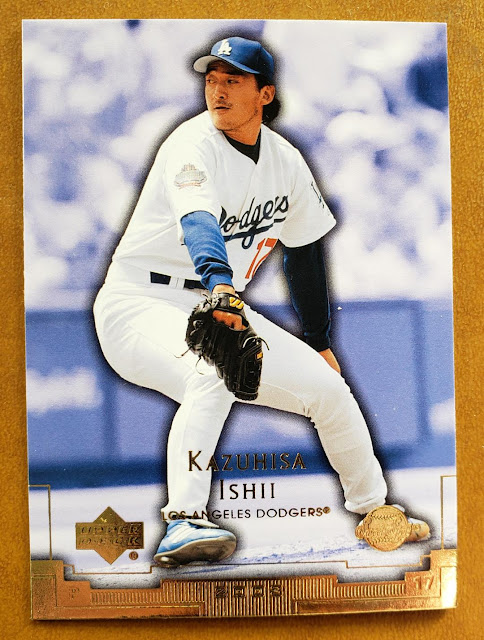 All very worthy items right there and tell me, when do you want to spend more than a nickel on a Kevin Brown card? (Or for that matter, a Chin-Lung Hu card, even a goldie?) 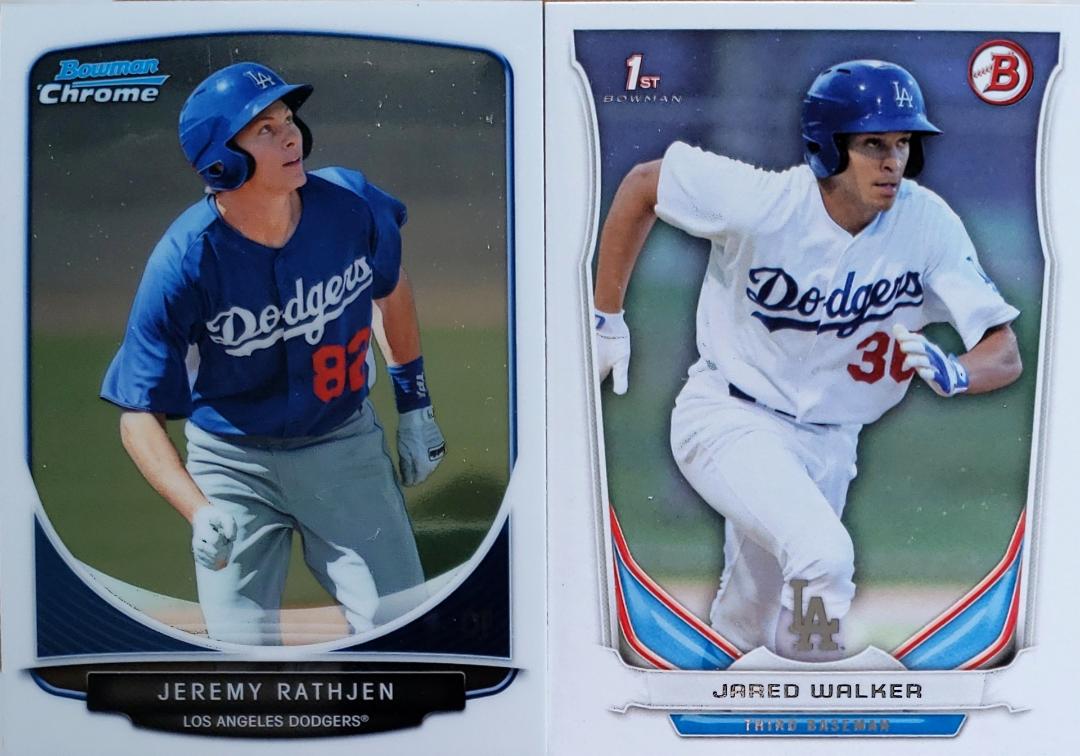 Prospects that never made it. Yes, definitely nickel material. 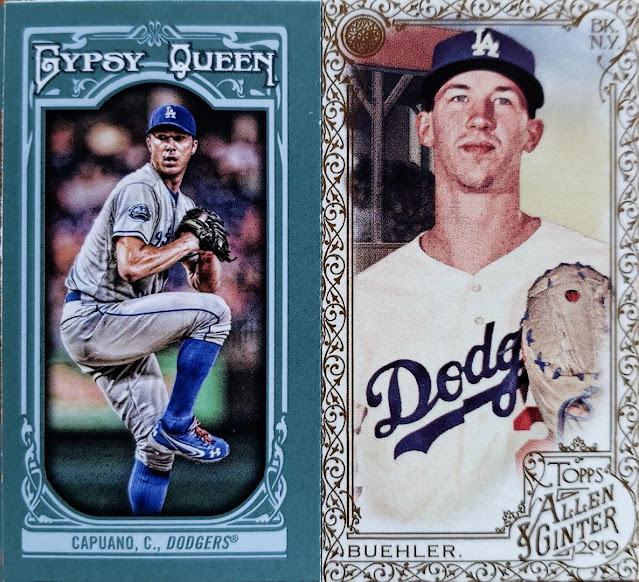 Possibly my favorite find of the bunch -- an A&G gold-bordered Buehler from two years ago in the nickel box!!! Sure, Capuano GQ mini, you can come along, too! 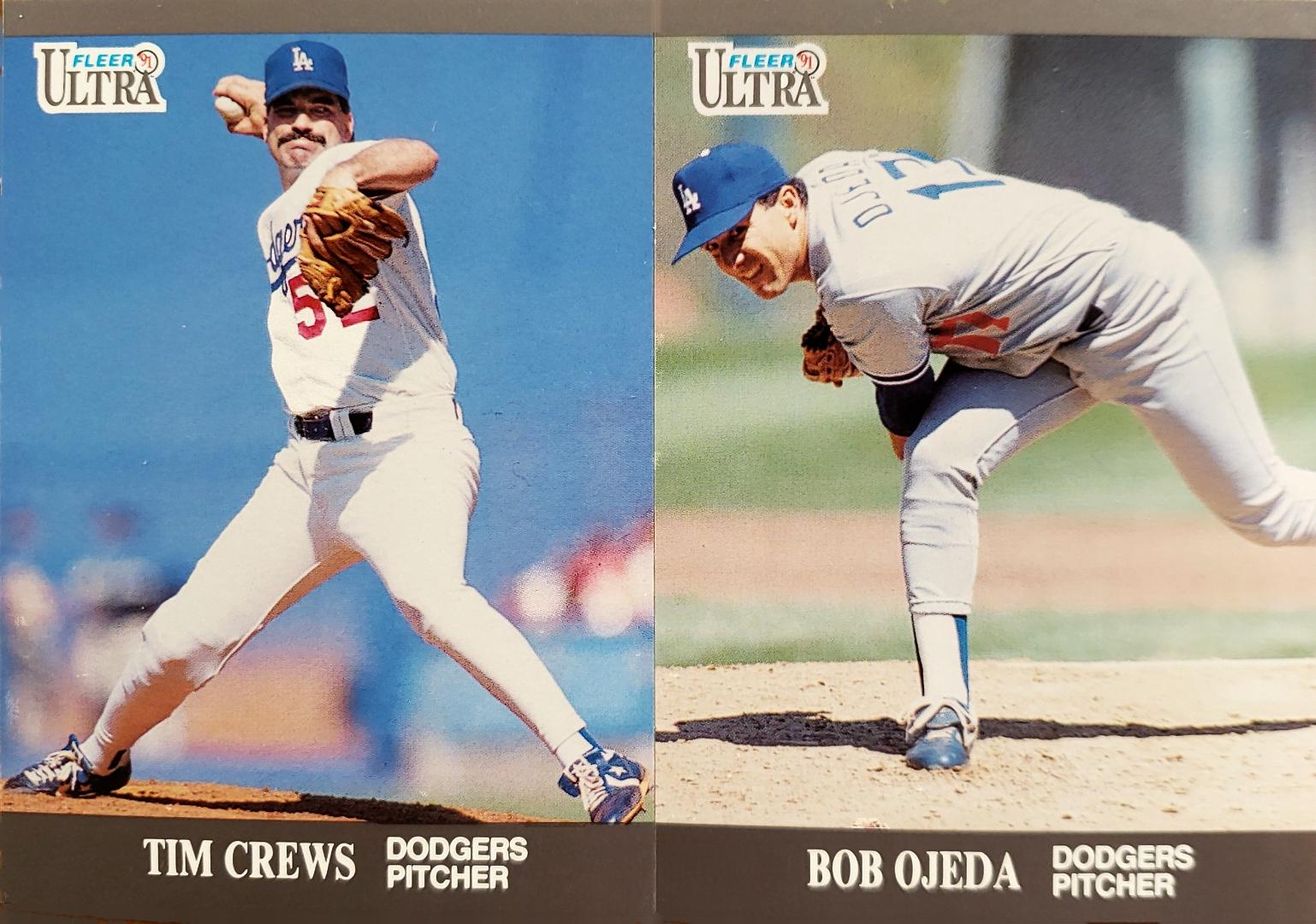 Then there are those times when you're walking along, minding your own business, and someone hops out of the bushes and says, "hey, there are 1991 Fleer Ultra UPDATE cards that you don't have!"
UPDATE? '91 Ultra had update? Why am I the last person to know this? Here I was the last 30 or so years happy in the knowledge I had all the Ultra I ever cared about (i.e. the Dodgers) and then I get this bulletin. (Turns out I did know about Ultra Update at one point and then forgot about it, which happens at least once a day when you get past age 45).
Fortunately, the Crews and Ojeda were a nickel apiece. The Butler, I'll have to put on that damn want list. 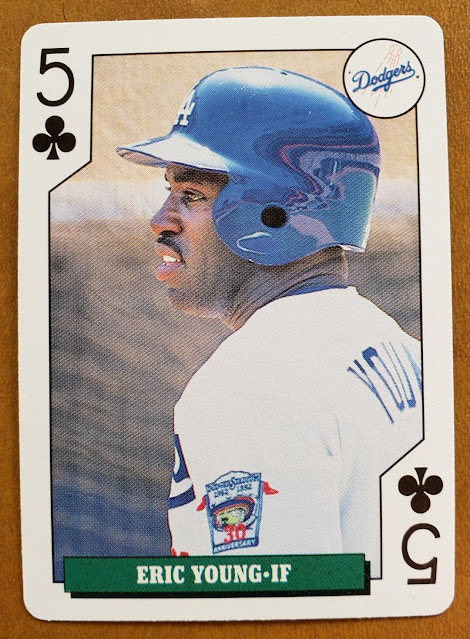 This was the last of the '92 Bicycle Playing Cards needs, scratched off the list. FOR A NICKEL! 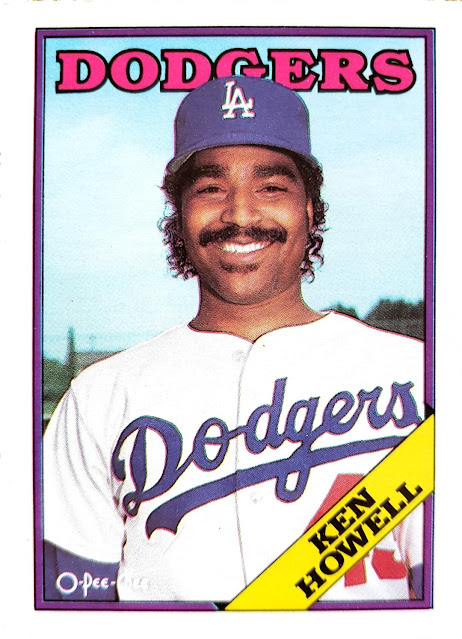 And this was the last of my 1988 OPC Dodgers needs!
That's another great thing about the baseballcardstore is I can always find some of those Canadian cards to fill holes. 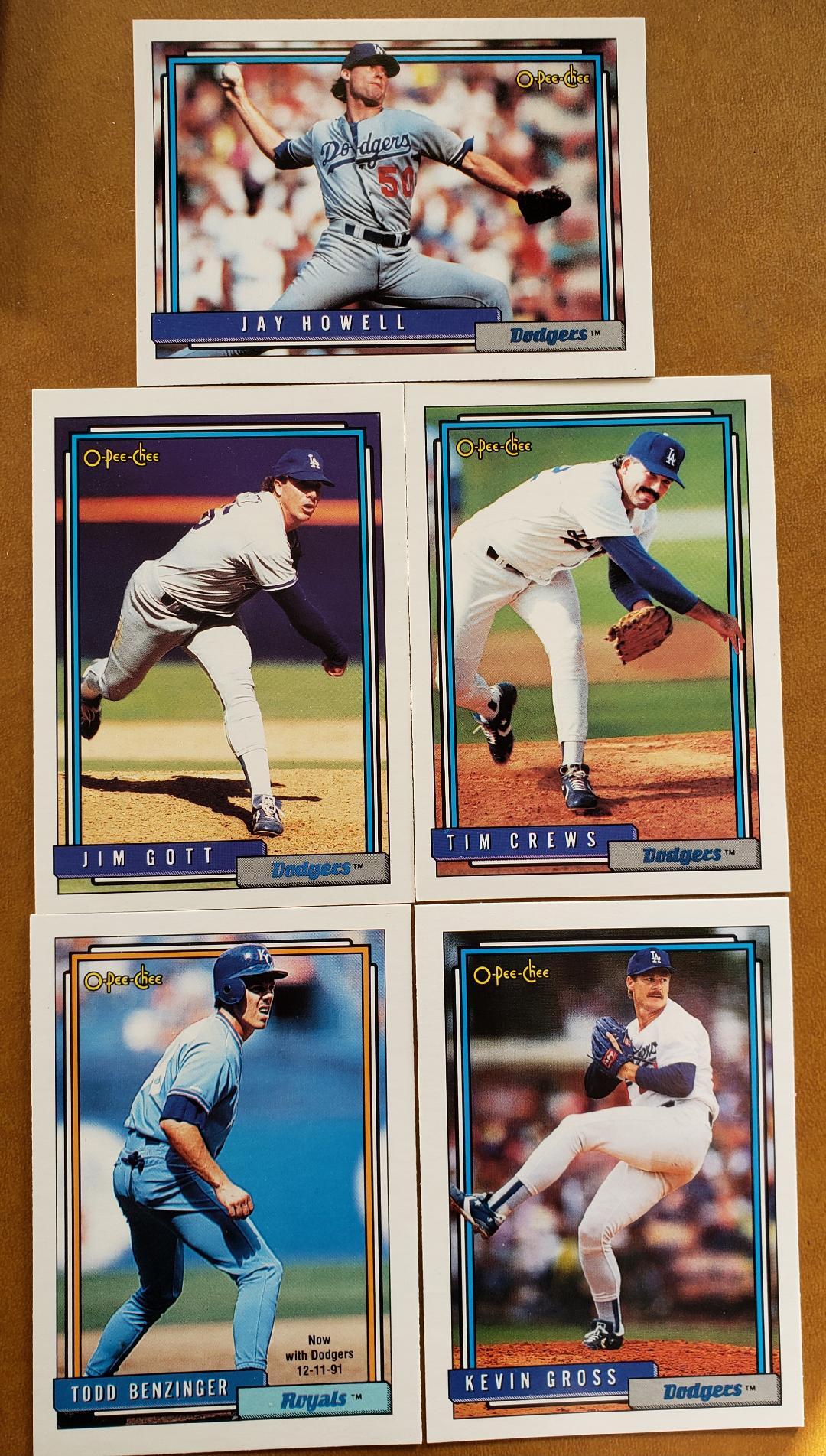 All of these 1992 OPC's were on my want list. In fact, they were the only '92 OPC's on my want list and now the team set is complete! I didn't expect to still be finding success like this at the nickel-and-dime store. 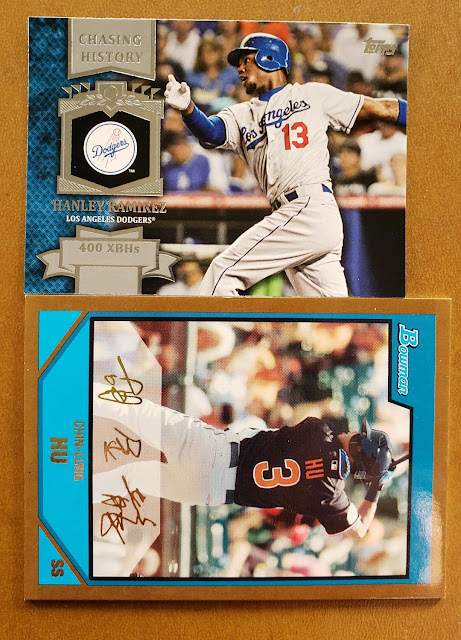 Unexpected finds include minis cards, like the A&G Buehler I mentioned, or this 2013 Topps Chasing History Hanley Ramirez mini. I used the Hu card to compare (probably not the best choice as the border blends into the table top). 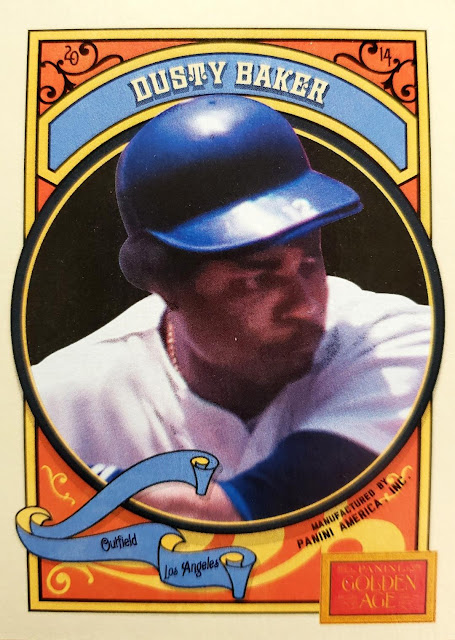 This is one of those cards that I swore I already own but can't find anywhere. Unlike at a card show where I have to debate myself over a $5 card, this was just a nickel! If a second one pops out of the closet on me, I'll laugh and say, "I only spent a nickel!" 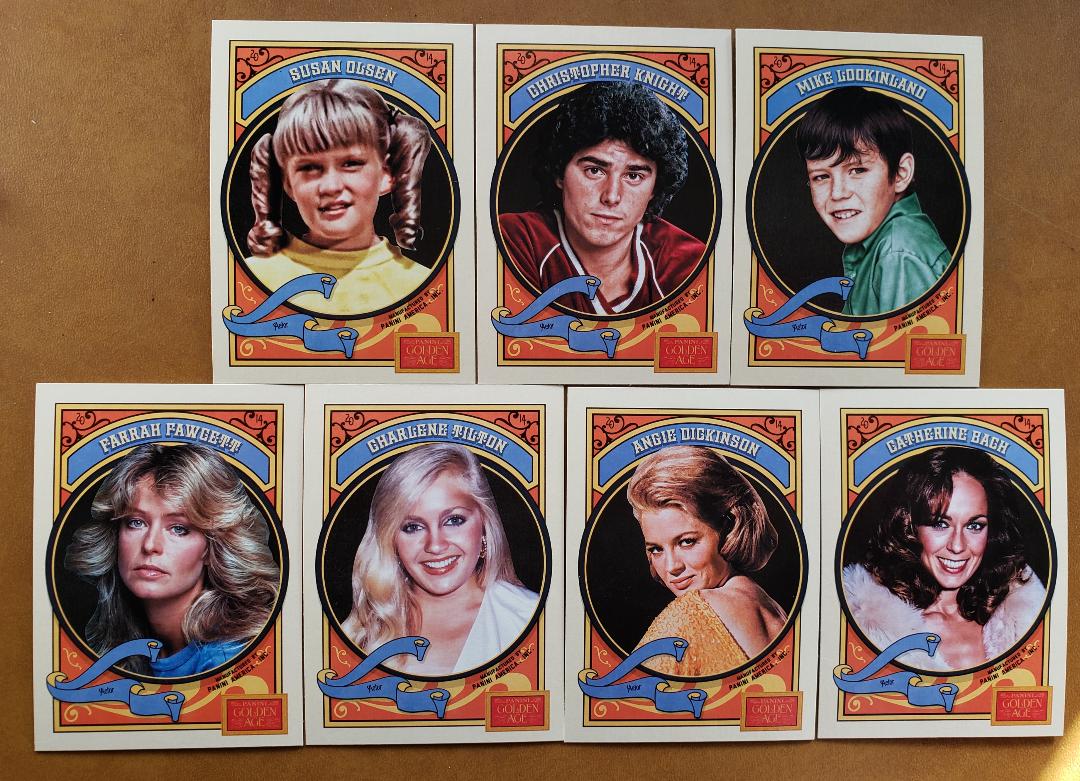 As always happens on this site when I run out of Dodgers to find, I start looking around at nonsports cards. I don't have much use for some of the subjects in Panini's Golden Age sets, but I'll certainly take TV stars from my younger days. (OK, Angie Dickinson was a bit before my time but it's Angie Dickinson). 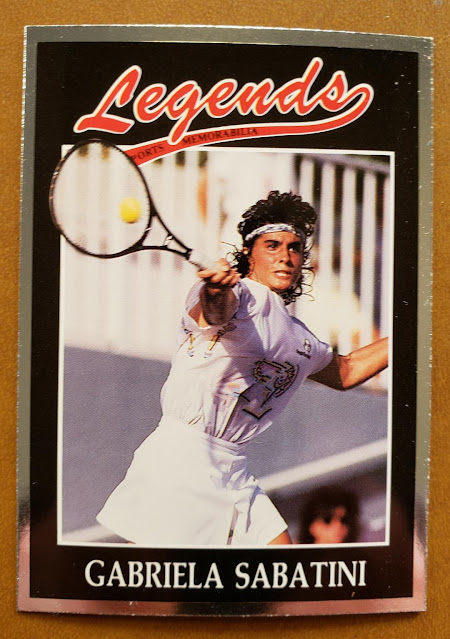 My first Gabriela Sabatini card. It seems criminal that cards of tennis legends are not readily available. 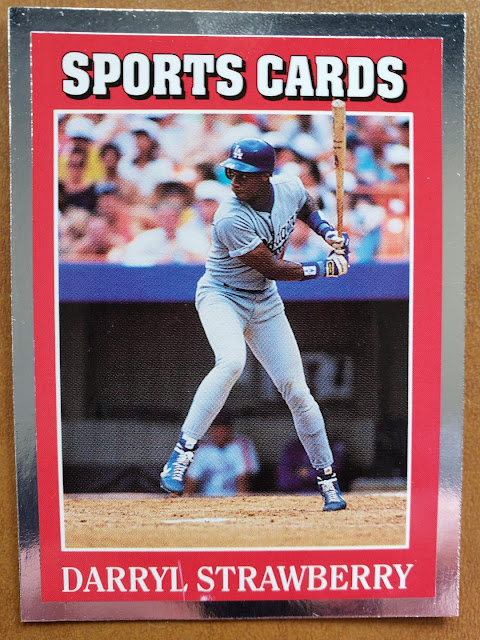 In a similar vein, one of those shiny sports card shop cards from the early '90s. 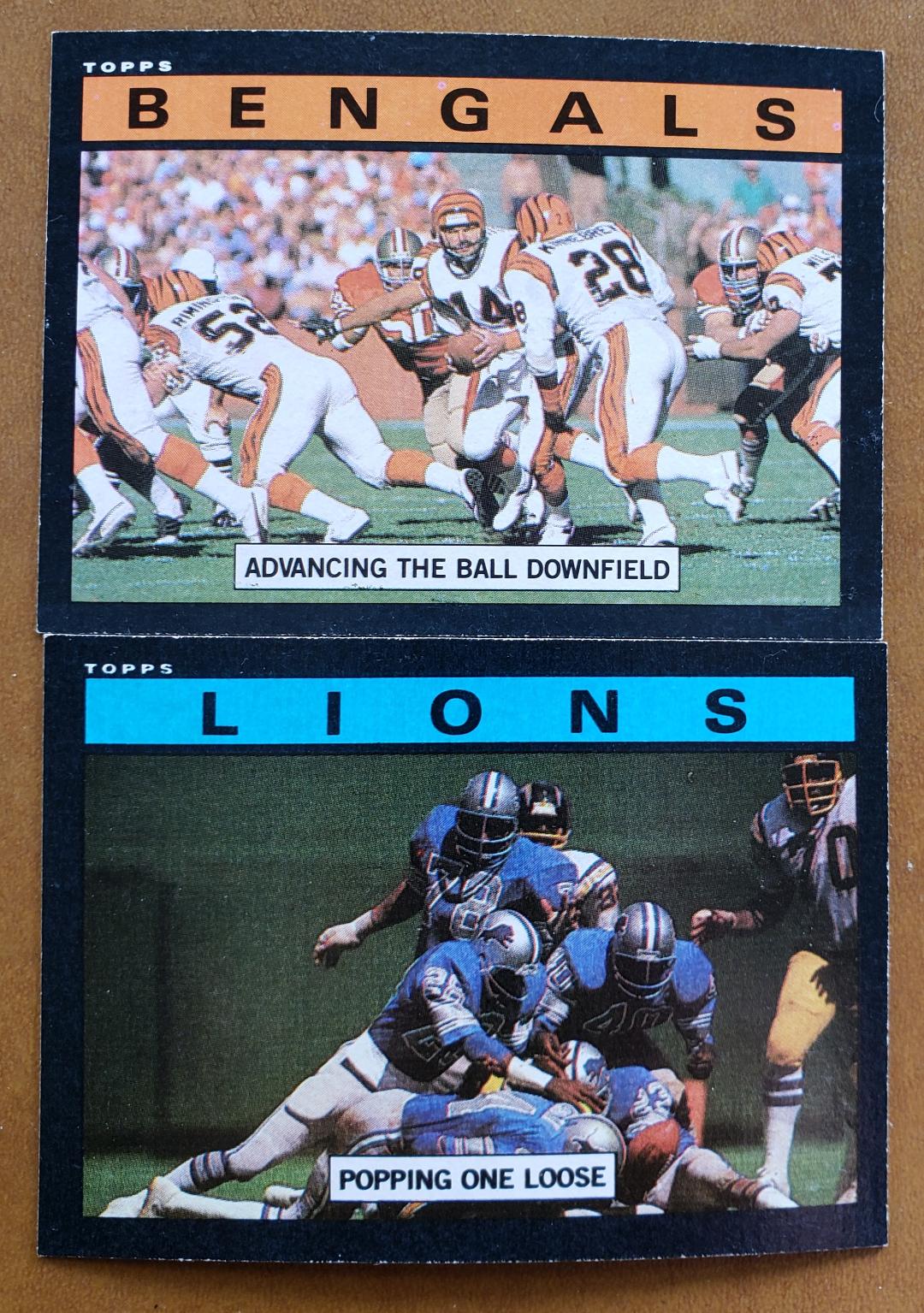 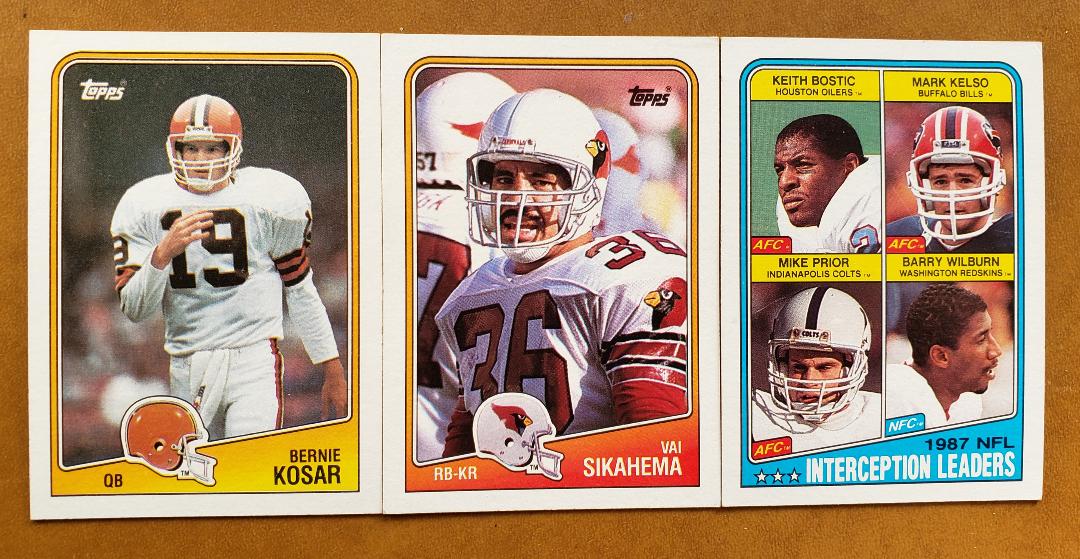 I don't have a big desire to collect 1980s football cards, but the designs are nostalgic for me (I love that '85 black-border set) and sometimes I see those names and I really want the cards. When you're watching football and you see a commercial where Bernie Kosar is "The Old Guy," you cling to cards like these. 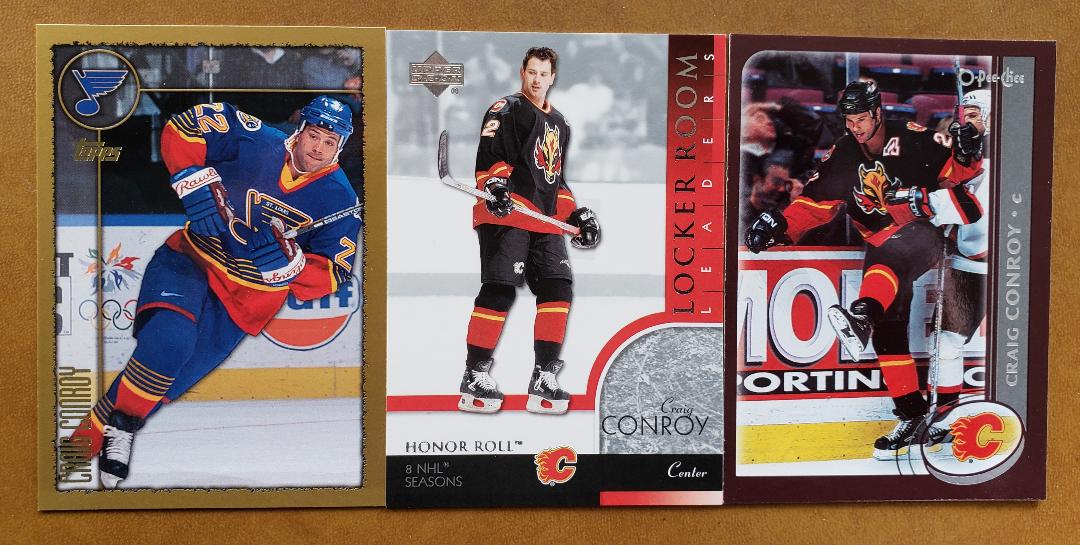 Some more Craig Conroys, who I've interviewed several times although the most recent time was like 15 years ago! 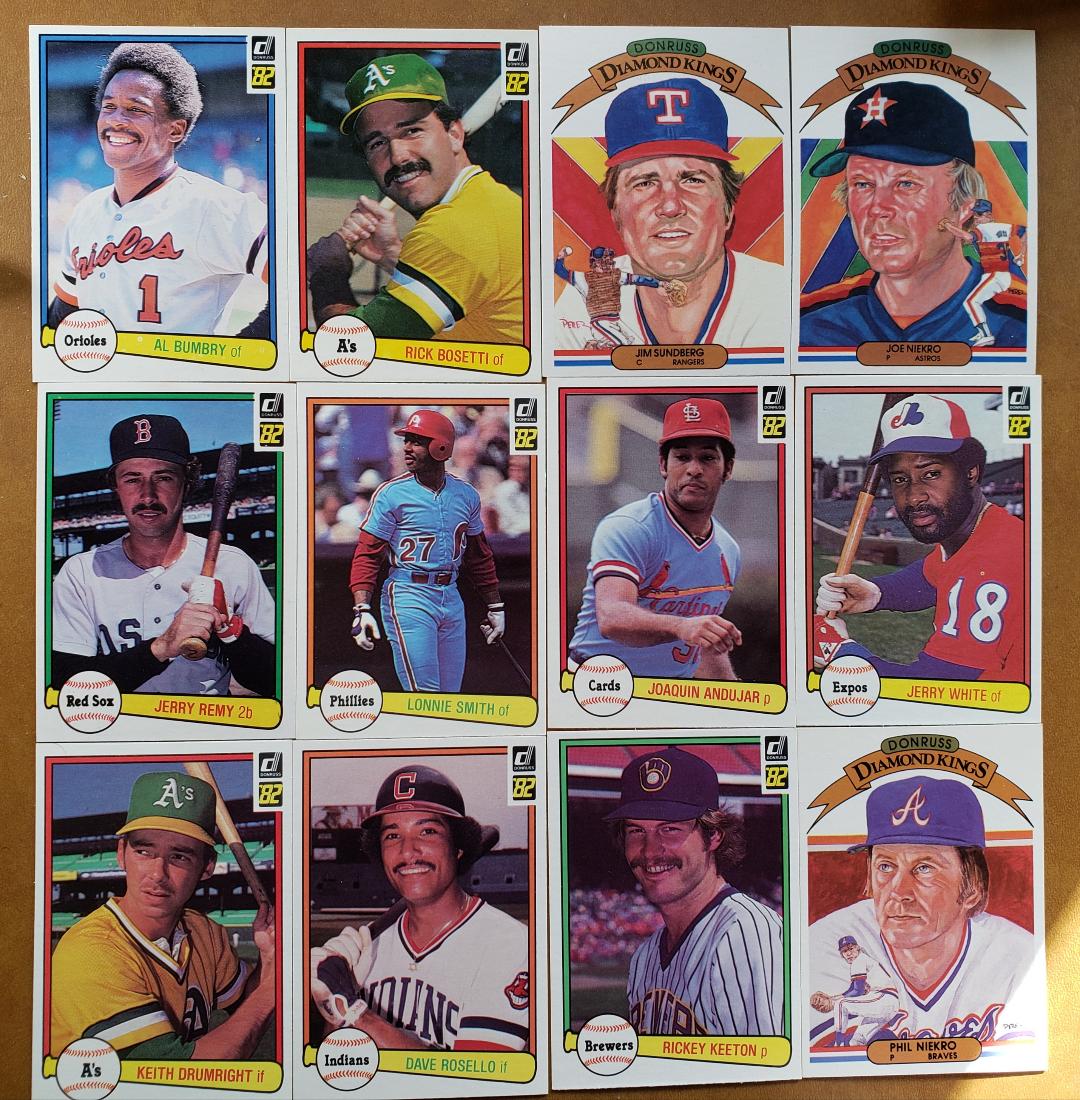 Almost forgot, I finally found 1982 Donruss cards on that site! I'm not sure whether the Diamond Kings are from 1982 or 1983, but it doesn't matter as I'm interested in cards from either set. 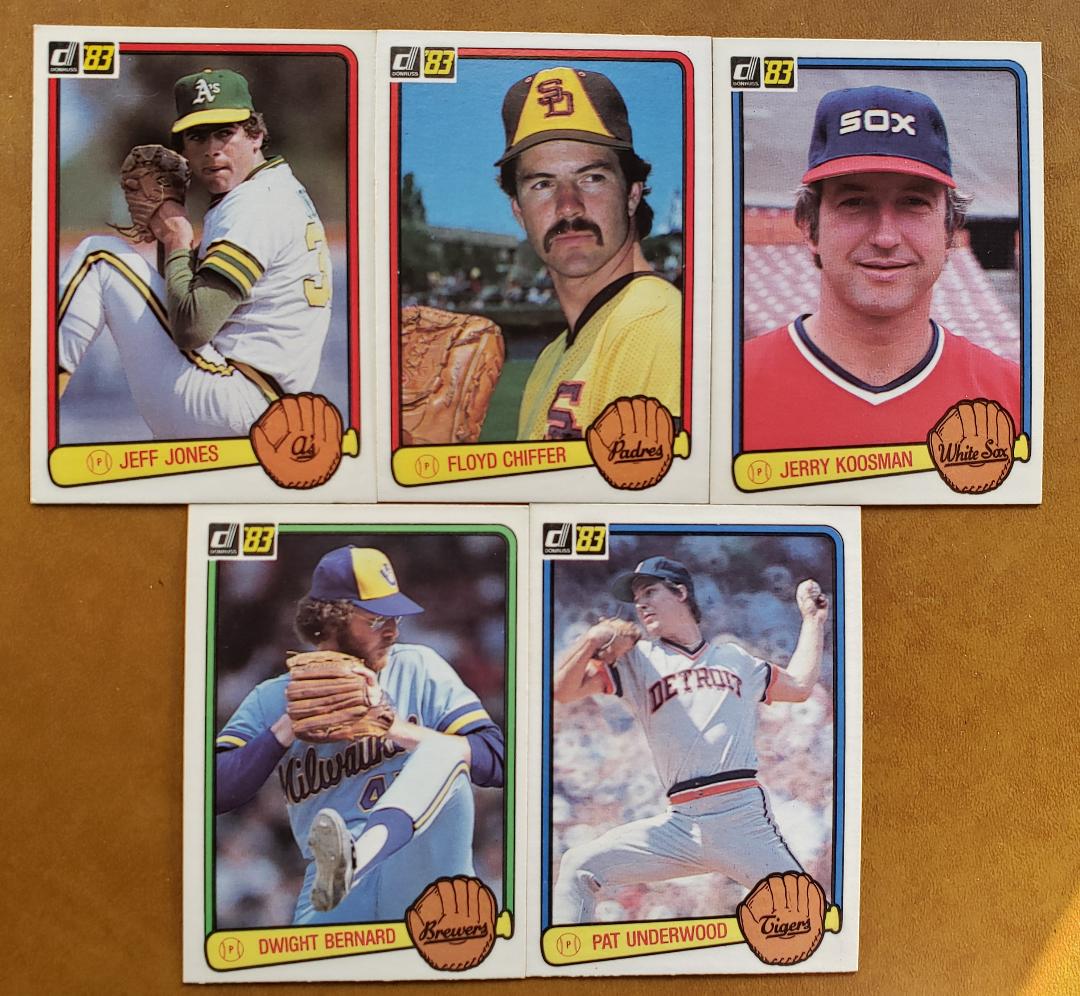 In fact, here are some 1983s now!
I'm probably going to make 1982 and 1983 Donruss a priority in the coming year. They're basically the last mass-issued sets from my initial collecting period (1974-85) that I haven't tackled. I still gotta get those '80s Fleer sets done though. 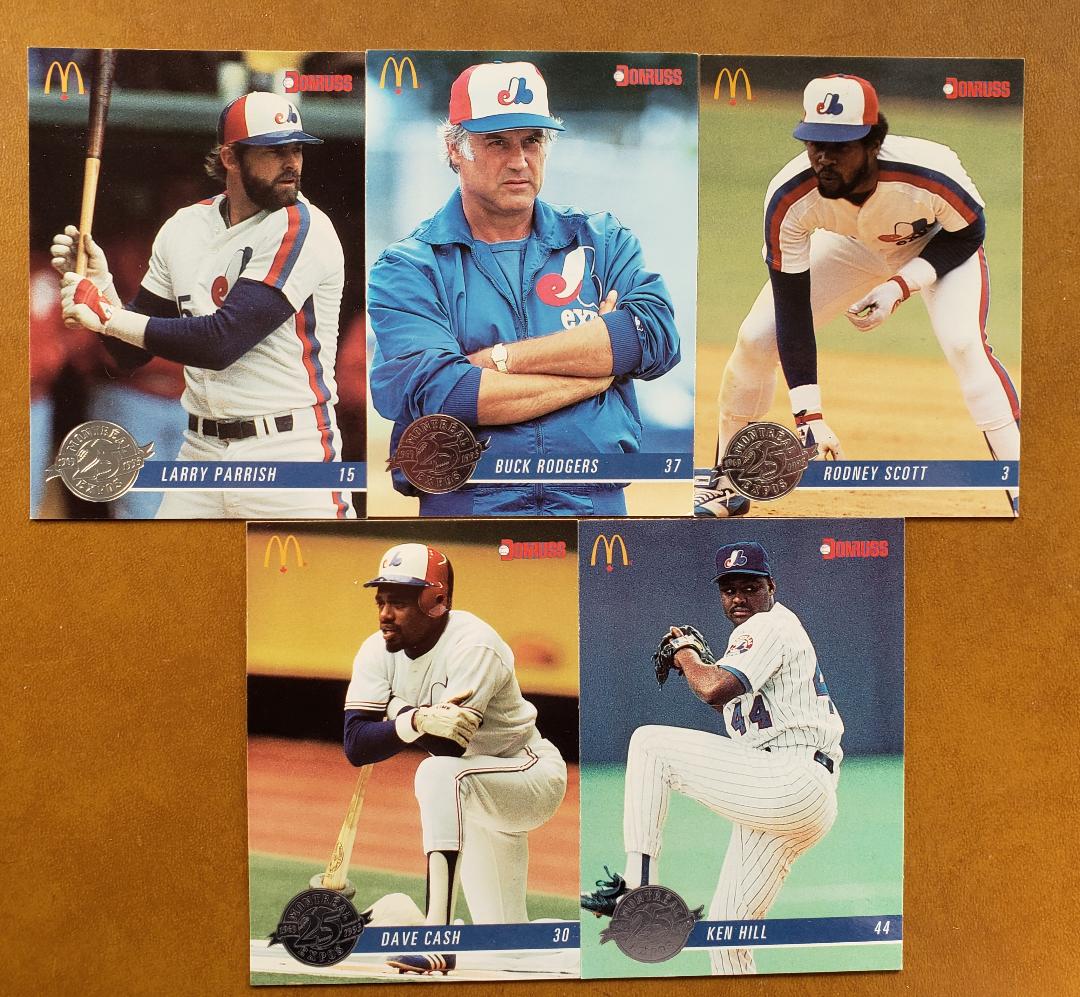 Finally, something that wasn't in my consciousness until it flashed across the screen: 1993 Donruss McDonald's Expos. I think the actual set title has the word "restaurant" in it, which I hope means that they threw these at you when you bought your Big Mac.
The backs are almost completely in French and about as pleasing as possible.
So, yeah, I think that was pretty good for a nickel a card.
The shipping for my 76 cards was $4.99, but it's no more expensive than anywhere else. I'm not one to care about stuff like that anyway. I still think it's a great deal and insanely cheap overall.
Dodgers that I needed, terrific oddballs, OPC sets completed, and a few early '80s cards is about all I could hope for if I visited a card show.
And even the nickel-and-dime boxes don't produce stuff like that.

bbcardz said…
Very nice pickups at a really terrific price--congrats. That reminds me, I also have 1982 and 1983 Donruss on my never-ending list of sets to inventory and put in a binder.
December 4, 2021 at 9:53 PM

Johnnys Trading Spot said…
I haven't been on their site in quite awhile. I'll have to check them out again. My offset what I did today, ouch.
December 4, 2021 at 9:57 PM

Billy Kingsley said…
Thanks for reminding me that I need to spend some time digging around to see what he has that I want. Probably a lot.
December 5, 2021 at 9:16 AM

Chris said…
I'm amazed you can find so many Dodger needs anywhere, but I'm also not surprised that you found 'em at the Baseball Card Store. The '93 McDonalds Expos cards are really neat, too. It's so much fun finding stuff like that for a dime -or a nickel, now. I've stopped buying higher-end singles (and retail boxes/packs) since the pandemic; the Baseball Card Store has helped me enjoy the hobby when I really started to lose interest.

Jon said…
I've gotten around 300 cards from them in recent months, and was even able to take advantage of their Black Friday free shipping offer, which I didn't even know about until the day of. I got the Charlie Lea from that McDonald's set in my last order. I hadn't been familiar with it before that, but they are really nice looking cards.
December 5, 2021 at 12:32 PM

Nick said…
I haven't tried the Online Dime Box (or Nickel Box now) for a while - gonna have to do another tour through their inventory one of these days. That Buehler is an excellent find, and those McDonald's Expos are terrific - I rounded up a bunch of those in one of my past orders from them.
December 6, 2021 at 12:22 AM

GCA said…
Looks like you made them another prospective customer. Plenty of old commons on my want lists, in batches too big to order elsewhere.
December 6, 2021 at 2:29 PM